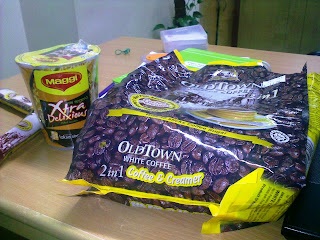 Well it's been two days since I began my new job. After six days of mental beach bumming at home. On day one I discovered that I had a colleague who has actually seen Bourdain at a restaurant at Cleveland and that she is a fellow Bourdain junkie. I discovered that the cafeteria in the office complex, Thacker's Cafe, sucks. The coffee at work was as I had been forewarned. A bite on a burnt, cold and sour and sada dosa from Thacker's and I came back on day two armed with Old Town White Coffee sachets and Maggi's Singapore Laska Cup O' noodles from KL, cream craker biscuits and alu and roti made by Banu. Finally met the rest of my team over a lunch meeting today. Over the rather the inappropriate first date meal of a Subway Sub. Luckily didn't make a mess of it barring some mustard on my trouser leg. A huge subway chocolate chip cookie and the discovery of more foodies in the team. Including a convert to vegetarianism who explores food all over the world and who introduced me the concept of 'mock meat' which they have come up for Buddhists in the Far East. They have given up meat but miss it apparently. The plus side of an office in Andheri. Creamy, old school chocolate cakes from Merwan's for team birthdays. Another group member whose eyes lit up when I spoke about the chicken puff of Merwans. And I cooked after what seems to be a lifetime last night. Fusilli with chicken sausages in a creamy cheesy paprika sauce, slim milk, slim cheese slice, seasoned with fresh basil and corn to cut the heat. The gym beckons.
From the hip

Scarlett said…
You know I'm going to ask for your recipe of fusilli with chicken sausages in a creamy cheesy paprika sauce, don't you?
22 July 2010 at 14:36