Those were the days when one would head to Colaba and South Mumbai to unwind. Oshiwara, Versova, Phoenix Mills and other new kids on the block didn’t even exist then as lounging options. Even Bandra, where I stayed as a PGite, was not as ‘happening’ as South Mumbai, or ‘Town’ as it was called. Leopolds, Mondys, Bade Miya, Gokul, Crystal, Martins, Bachelors were some of the common haunts in Town. And of course good old Cafe Churchill.

Ten years back, on a Sunday, it would take more than half an hour to get a table for dinner at Churchill. Perhaps even an hour. Yet we would wait. It was the Continental haven of the 90s and early 2000s after all.

Tonight we waited for less than ten minutes to get a seat at 9 PM! I would never have believed it if someone told me this was possible in July 2000.

Once you step inside Churchill you feel as if you are frozen in time. The arrangement of the tables is the same. The American deli style board displaying the fare is the same. The menu card is the same. Barring the prices. The ‘specials of the day’ have remained the same over years. The desserts in the iconic fridge remain the same. As do the paper mats on the table with the sketch of a smiling sun licking its lips.


Mr Gandhy, the affable plump bearded gentleman, continues to sit at the till. A decade later looking bemused at the CCTV feeds. These aren’t his favourite channels after all. And, as we discovered today, passing out sachets (!) of barbecue sauce mix when the Chef called for them from the kitchen. We’ve earlier seen him slip out ice tea sachets when these were ordered.

The thick, cream coloured, ceramic plates on which the food is served remain the same. No pretence of fine dining or of gourmet trappings here. If you order a dish with sauce then the sauce would be floating across the plate with a blob of mash on the side. No artistic squeeze bottle patterns on the China here. Yet the hearty, tummy satisfying, nurturing, cradling, hot, home-food like taste of the food remains the same. Our order remains the same. Peach ice tea (no longer served in beer mugs though) and penne in prawn Newberg Sauce.

But of course things aren’t the same. It’s 2010 after all. I ordered a new dish in recognition of this reality. A dish described as ‘Carni’ in the pasta section. Strips of ever so tender ‘pounded beef’, fiery green chillies which I thought only we put in pasta, my new favourite of spaghetti, a nice way of satisfying stifled desires for Chinese noodles, swimming in a glazed onion sauce. A Continental dish, which looked like an Oriental beef noodle soup. In fact i used a spoon to finish it off. Yet tasted like soul food. A new discovery that was so enticing that it distracted the most passionate of Prawn Newberg lovers too. 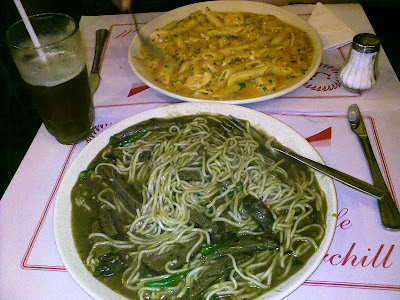 We stepped out of Churchill at ten pm. Not a soul was waiting to be seated. A far cry from the mad rush of yore. Not a damning statement on Churchill. More a testimony of the fact that Mumbai had spread its tentacles and that its suburbs have come alive. That South Mumbai is in reality more a ghost town at night. Enchanted and pretty as it is.

A reminder that this is 2010 and not 2000. That things might look the same. But are not really the same.

PS: We headed to Theobroma for desserts. We love their brownies. And they have a wash room!
Conti From the hip Mumbai highs South Mumbai

Scarlett said…
Strange. Churchill generally had a line of patrons waiting to be seated on weekends even uptil a couple of years ago.
26 July 2010 at 11:10

Kalyan Karmakar said…
Could have been the rains Scarlett but we do find it easier to get a place in town these days
26 July 2010 at 14:18

Journomuse said…
Cafe Churchill...you just 'stirred up' a lot of happy memories - of escaping the monsoons while shopping in Colaba, to find a table miraculously...My first taste of pasta and peppered chicken steak..yummmm..and the best for long..till I went to this quaint little Italian place in Brighton...:)
26 July 2010 at 22:54

Ya things are changing, right from town area turning dead for night life to the polluted Mumbai where one cant even breathe fresh air. That is why Otrivin has started an initiative called "Lets decongest" wherein free saplings will be given away to everyone . We wanted popular bloggers like you to help spread the word for us. To know more about the initiative visit us on www.facebook.com/letsdecongest , you help will be much appreciated.
29 July 2010 at 13:41

missydee said…
Kalyan, I have to admit - your blog is the favorite antidote to my "I miss Mumbai/ good old days" moods. Thank you for being the food explorer that you are + being generous enough to share your experiences!
17 February 2012 at 03:51