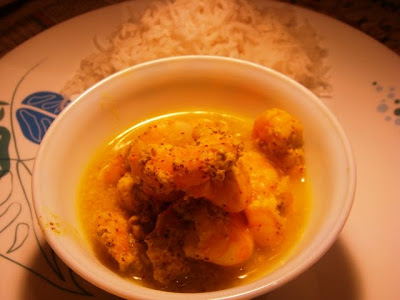 Programming Note: The recipe is right at the end of the post

I went to the Khar fish market today. Thanks to my mother I have a new woman  now.

So here's something that I cooked recently, shorshe bhaapa chingri (prawns steamed in mustard).

I chanced upon the recipe on Pree's excellent food blog, Preeoccupied. Pree is a Bengali who grew  up in Bihar and then Delhi. She is now settled at Toronto with her husband. She is the one person I know who updates her blog with an even more manic frequency than I do. What you would expect on her blog are a number of traditional Bengali recipes with very easy to make instructions geared for the modern kitchen. Complex dishes that you would never expect to find at Toronto. Makes you think that if Pree can do it at Toronto then I definitely can at Mumbai. Yeah right?! Hubris. She is a very good cook.

It would be be unfair to dub her blog as a 'Bengali' food blog as she writes about dishes from all over the country and even the world. Her posts come with a personal touch and give insights into the culture and folklore of a Nomadic Bengali. She often shares glimpses of her very artistically done up house which is featured on local decor magazines. She puts up some really fantastic food photographs. She has recently had some 'good news' in the grandmother sense of the word. I am sure she will make a great mom and that her baby will get to eat some gourmet gruel.

The reason why I have a soft spot for Pree is that she occasionally takes Bourdain's and my name in the same breath. Check out her post on her Blog friends and scroll down once you are done with the really good stuff. I have not met her yet but she definitely qualifies to be a Finely Chopped Knight just for this.

Well this recipe is essentially hers with a few modifications from me. This is her original recipe for shorshe bhaapa chingri. Pree says that mustard oil is key to this dish. As it is to most Bengali dishes. I can't stand mustard oil. I was planning to use a drizzle of olive oil but I forgot. So I ended up making an oil free new age dish through serendipity.

I give a lot of weight to Pree's suggestions. The first time I made a Bengali pulao, rather successfully, was by using her recipe and her answers to my questions. Her shorshe chingri called for 20 min in the micro. I was a bit sceptical as I felt the prawns would get overcooked. Pree suggested 17 m. I ended up with 11 min. I planned to check to see if it was done after ten min. It was.

Pree's recipe called for curd. I was afraid that the curd would curdle. Pree said that it wouldn't if I added the curd in the beginning and not when it was hot. I listened to her. She was right. It didn't curdle. Just a mild graininess which went once I stirred this dish. This added to the texture of the sauce. Pree felt that even this mild curdling wouldn't have happened if I had put some oil. This apparently would have added some moisture. I am willing to go with her on this. The photos on her blog are proof enough of her magic ladle. I tempered down the spice mix as K can't handle the sort of mustard frenzy that Bengalis can.

Well without further ado is my take on Pree's recipe for shorshe chingri: 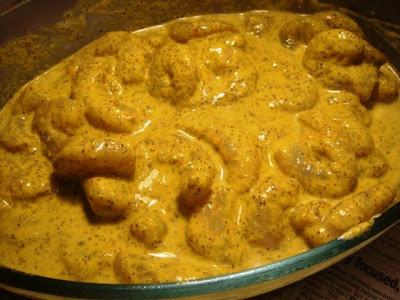 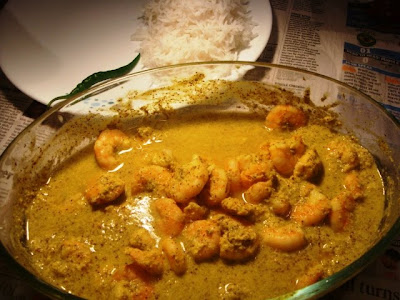 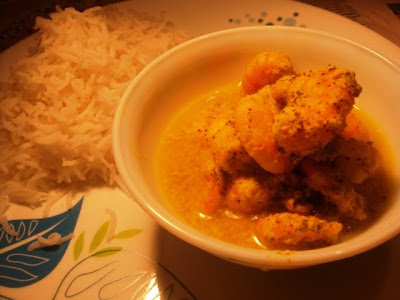 Unknown said…
K, This is embarrassing, but in a good way. Especially on a morning when I was sulking about the fact that I cannot boil an egg!
24 August 2010 at 17:06

Sanchita said…
I use similar recipe for bhapa Ilish. Turns out really well. Also I add 1 tsp of Mustard oil on top. :)

Kalyan Karmakar said…
@Pinku, Sanchita...really. I was puzzled by the orange glow. You should see the pics of Pree's. Sanchita love your food photos too. You guys are stylists
@Scarlett: what a wonderful sentiment...hope he doesn't break my head for this
@Pree: life has taught me that it easier to understand women than realise when an egg has been boiled right :0
24 August 2010 at 19:33

I have been reading your blog for some time now. I am a bengali born and raised in Bombay infact Thane(my parenst still live there) and had always wanted to know the best places to eat and hangout in the townside. Your blog is so full of information that ever since i have discovered it(maybe 2 weeks back) i have read almost all the posts. I now live in New Jersey and everytime i visit Bombay/Calcutta i want to visit these eating places and just pigout. Last time went to Colaba after many many yrs and went to mings and then tardeo to sardar pao bhaji and swati snacks but next time Oh calcutta it will be. Also went to tungfung in calcutta though wanted to to go to Mocambo but it was crowed. You have a wonderful blog and i couldnt refrain from posting a comment here as it just makes me miss bombay so much and fall in love with it over and over again! Keep posting and i would definitely keep reading as its the first blog i start my day with.

Thanks so much for writing in. I have a classmate who lives at New Jersey and another who was called Molly :)

Glad you found the stuff useful and hope you get to visit home soon again.

And happy birthday to your dad

Anonymous said…
Thanks Kalyan...Molly is a very common bengali name so am sure u will have them a lot :)) Which school did u go to..my cousins live in Ballygunge and went to South point..as its a small world am sure you always find some link somewhere...had been to india in may this yr and wanted to go to brittania and all but had no company :(( as i wanted to try some parsi food..anyways there is always a next time so hopefully.....Molly.
25 August 2010 at 01:57