on August 29, 2010
My recent posts have been about Vintage Bombay. Its nooks and crannies. Majestic colonial buildings from another era. Hole in the wall eateries. Of food for the soul. To fit every wallet. To fill every stomach. Served by people with no pretensions and very big hearts. Redolent with history and character.

This post is about a dinner in a place which is what Modern Mumbai is all about. Very different from the past. With no place for nostalgia. A city on the move. A city that doesn't look back. A Xanadu in the midst of barren lands, slums, large pockmarked roads, concrete highways, suspicious security checks. Architectural and design brilliance which matches the best in the world. Service levels which are modern, efficient and cannot be faulted with. A sense of space and modern design which stands out from the crumbling infrastructure of the rest of the city. Where a meal or a room can cost more than the most expensive places in the world. A dinner at China House at the relatively new Grand Hyatt, Kalina.

It's unfortunate that I didn't have my camera to capture the brilliant, awe inspiring and yet cosy decor of the hotel. Or of the largely memorable dinner. And the bill which would probably cause an Income Tax raid at our place.

In a way not having the camera was symbolic of the teenage angst that Modern Mumbai is going through. To start with it has to get used to being called by its official name Mumbai. And forget 'Bombay' the name by which it was till recently called. A bit like a Bengali child has to forget the Tumpas, Jhilmils, Bubais and Boombas and get used to being called Tillotoma, Satyendranath or Indrajit. Or get used to curfew hours. Mumbai wants to be a world city. Its political masters want it to be Shanghai. We like to call it the New York of India. And yet the city that true never sleeps is forced to go to bed by midnight.

K and I made impromptu plans to go to 55 East. This is the restaurant at which I went to the Bloggers Dinner recently. I didn't carry my camera as I had photographed the place ad infinitum the other night. We reached at 1140 PM. Were told that the restaurant shuts by 12. The idea of being left with a pumpkin after paying so much didn't appeal to us. So we checked out other options at the Hyatt.

We headed to the Chinese Restaurant, China House. I remember reading about China House when it was launched. I rued not having my camera as we walked past the open air Oriental pond, pushed open the heavy wooden gates and entered. The ambiance was very charming. Dim mood lighting with brighter yellow lights focusing on the tables so that you could see your food. Chinese food is all about colour and texture after all. They had nice wooden tables strewn all around as well as very elegant wooden Oriental booths with comfortable sofas. The cutlery set was earthen with peaceful calm colours. Made a pretty picture which unfortunately didn't inspire my Nokia E 71. A completely useless phone for indoor photography.

We were under tremendous pressure though. We were told that the last order would be taken at 1145 PM. It was 1148 PM. That all our food would be brought to the table at the same time. And that we better behave because Wee Willie Winkie runs through the town. That's Mumbai. You can get the best that the world has to offer if you can pay for it. But are always racing against time.


Our order was taken by a young, well informed, courteous waiter. He patiently listened to our questions, reacted to our suggestions and made his own recommendation and gave his stamp of approval on our final order. He gave us the feeling that we were in good hands.

The bowl of boiled peanuts and glass noodles, 'compliments of the Chef', looked suitably Oriental and expectedly uninspiring. I was happy to see the crushed pepper mix which Arindam OD's on in KL's Restoraan Chilli Pan Mee amongst the condiments on the table. The chilly oil in the aesthetic little oil jug was charming too. 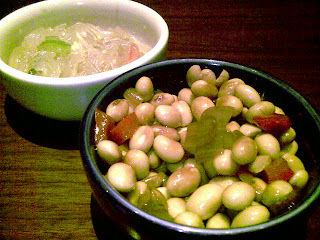 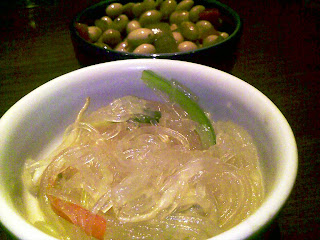 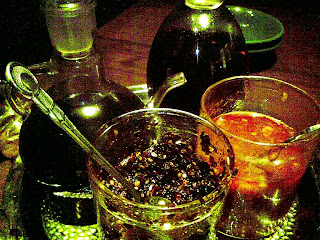 Our wine, 'full bodied red which will go well with your pork', and bloody expensive, Vanilla Absolut and the food came together to our table as we were conscientiously warned.

The sliced pork belly with pepper was phenomenal. The host at the counter had mentioned this when I enquired about pork dishes. It lived up to its front page billing. Thin slices of very succulent pork. Good, honest meat. Aristocratic enough to make you feel pampered. A very delicate flavour which would find a nod of approval from the most demanding of Chinese Emperors. This was the sort of dish whose memory stays with you for years. 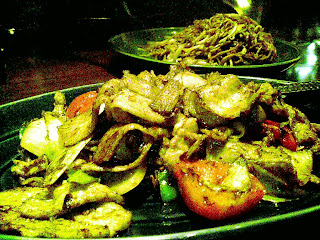 We had a long discussion with our waiter before we decided on our choice of noodles. Crispy noodles would come with sauce which we didn't want. Another noodle would be 'Maggi like', slithering and not to our taste. Dan Dan hand pulled noodles sounded exciting but not the soup it would come with. Seafood noodles didn't 'make sense' as we were ordering a prawn dish. too The waiter finally suggested a simple noodles with pickled vegetables.

I broke into a big grin the moment the noodles arrived. This was a far cry from the limp, flaccid 'Hakka' Noodles served in most restaurants here. This looked colourful with the promise of sauces typical of the Far East with a heady aroma which took me straight to the Hokkein Mee stalls of the food courts of KL & Singapore. One bite and I realised that it tasted as good as the noodles I make at home 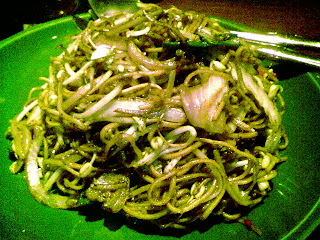 Next came our order of prawns with mushrooms which was recommended to us when I wanted a dish with real Sichuan peppers. The most expensive dish of the night, the one which breached the four figure mark was disappointing. The king prawns were juicy no doubt. And generous. Must have been close to ten to twelve pieces. But the sweetish, red sauce was passe, reminded K of Ashok Restaurant & Bar at Dadar, not the definitive standard in Chinese. It definitely did not inspire the sort of awe that its price did. 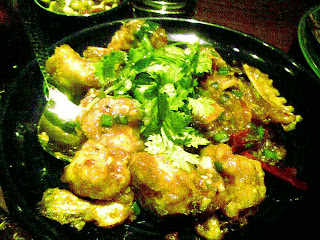 Still it was a meal which we ate through with a happy smile on our faces. I remembered my newly acquired skills and used chopsticks in between. We gave the Oriental desserts a miss and drove back home through the wilderness of the highway with a song on our lips.Noone expects a five star dinner to be the cheap. The overall experience was special. The food? Inspired at parts. Mundane at others.

It was a meal which made you feel special through its sheer opulence and grandness.  Still, call me an old romantic fool if you must, but me heart is owned squarely by the little honest enterprises of Vintage Bombay.
Oriental The suburbs strike back

Curry Spice said…
NIce one! As usual very well written.. the more I read you spin your tales.. the more I realise how far I have to go. Also even without the camera its vivid enough to create a great visual of the food.
29 August 2010 at 10:28

The knife said…
Everyone has their own way of spinning yarns Jyotika. I find the photos you take very inspiring
30 August 2010 at 03:02

Sassy Fork said…
Was glad you covered China House.Had heard about their Dimsums and Peking Duck.
Believe it's frequented by a lot of Bollywood stars.
Agree with Curry Spice....your descriptions made up for the lack of the camera
Wish it wasn't that expensive.
30 August 2010 at 03:34

Miri said…
I have been wanting to go to the one in Delhi for quite some time now...the thought of my wallet screaming makes me wait. But the meal looks exquisite!
30 August 2010 at 15:08

hiheeman said…
Exotic mouth watering cuisine is soul stirring and good.
I have explored all the luxury hotels in Mumbai and found them to be the best in fine wine and dine.
19 July 2011 at 11:06