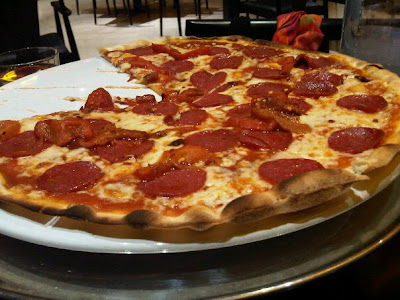 Think pizza and the image which probably comes to mind is that of dreary office meetings, working lunches, cold stiff cardboard pizza base with soft squishy things on them. Topped with Chaat masala or ajino moto and soya sauce.

If you are fifteen and below then a pizza could still be a special treat from your grandfather. If you are in your early twenties then it could mean dinner at your PG, rented house. With friends over a few beers. A day to splurge because pizzas don't come cheap.

I was supposed to share a flat with a few bachelors from work when I moved into Mumbai years back. I entered the house with my suitcases. Saw piles of empty pizza boxes and beer bottles strewn all over. Hailed an auto and ran to my PG (Paying Guest) aunty and her flat . Choosing her benign dictatorship over the Bohemian Rhapsody of a shared flat till I rented my own apartment.

I like pizzas. I don't love them. I have rarely come across pizzas which make me stop in my tracks and do a double take. It is so difficult to find a pizza  these days that isn't Tandoorid, Schezwand or Koliwadad. Gone are the days of good old Meat Feast or pepperoni and cheese pizzas. Pizzeria at Churchgate is one place in Mumbai where I like the pizzas. And that's about it.

Last year I had pizzas at two places which made my heart skip a beat. At the risk of sounding like Mr La di da Sanghvi let me confess that these were at the Yash Chopra land of Switzerland.

One was a pizza called Da Vinci that I had Ristorante Pizzeria at Montruex and later at another branch at Zurich. The other was the smoked salmon pizza at a tavern at Zermatt. The novelty of having distinct pieces of meat, rocket leaves, shards of parmesan and blobs of Mozzarella on a delicate piece of bread at Ristorante Pizzeria was very royal. The other pizza had smoked salmon. Need I say more? 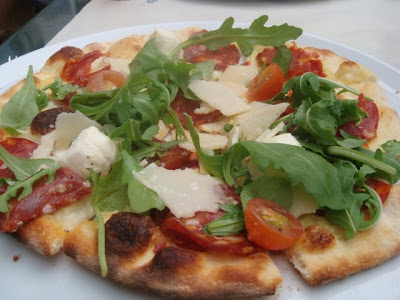 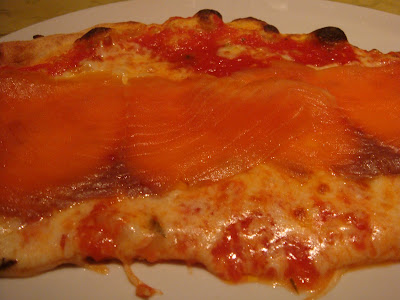 Then I had a pizza today that made me once again freeze in joy. At good old Mumbai this time. In the rarefied confines of a five star I confess. But at fairly plebeian prices. Deep in the suburbs of Goregaon.

The first time I heard of Prego at the Westin Hotel was from Sassy Fork... friend, rescuer of my occasional ailing tummy and now fellow food blogger.

Kainaz took me to Prego for a Farewell From Suburbs lunch.I will be working at Fort, South Mumbai's original business district, for the next three month or so!!!! So Samovar, Mocambo, Kala Ghoda Cafe, Joss, Mondys, Pizzeria, Churchill, Theobroma, Brittania here I come. Check out Chips Photo Album on South Mumbai

Prego has a modern steel and chrome look to it. It is high ceilinged, airy and gives you a sense of space so rare in Mumbai. Touches like a wood fire oven, food books to while your time away with (Tony, Nobo, Jamie are all there to give you company), funky booze bottle arrangements, bread and cake displays, a spaghetti corner, a cheerful red and yellow ceiling give it a distinctive look. 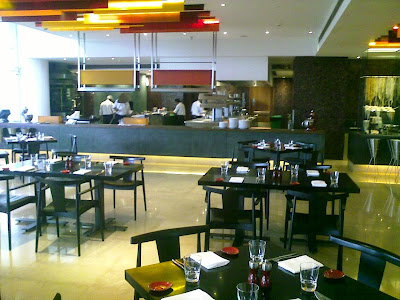 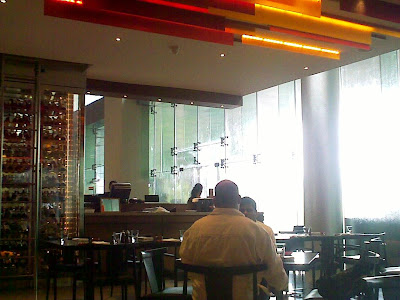 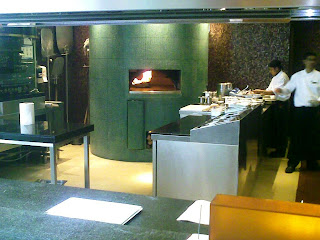 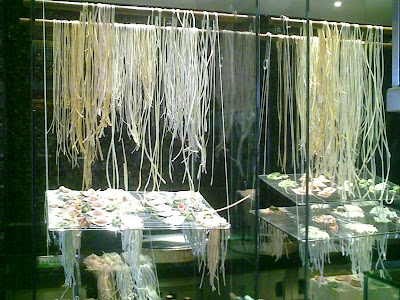 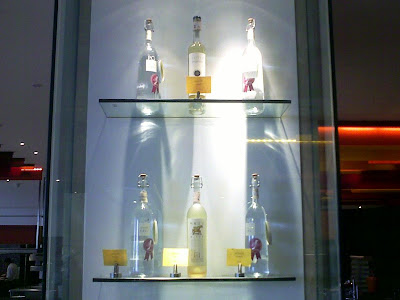 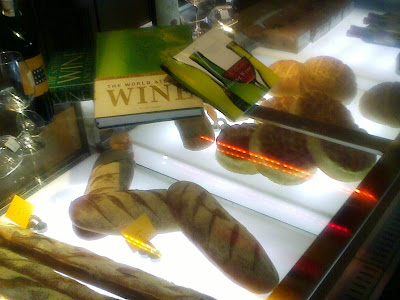 K suggested that we go for the pizzas here. I saw someone else pizzas. Looked promising. We went for it.

I was quite impressed by the service. The young waiter taking our order was warm, friendly, articulate and well informed. As you spoke to him you realised that you were in a five star and getting your money's worth. We told him that we wanted cold cuts instead of the array of chicken pizzas in the menu. He suggested pepperoni or salami. K asked for Parma ham. He said that it wouldn't go well as Parma doesn't taste good cooked. A valid point. We chose pepperoni. The waiter warned us that it came with bell peppers and chili flakes and could be spicy. I asked for chopped olives instead which he was fine with.

They got us some brown bread with an ice cold tomato based dip to start with. This was on the house. Eminently avoidable. Possibly healthy. Reminiscent of the black and white Films Division documentaries that they used to show before movies were screened in the olden days. 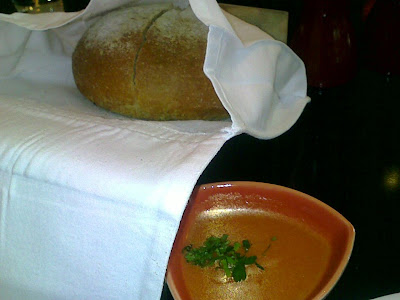 Then came the pizza. Handcrafted by Michelangelo himself. Peeled of the ceiling of the Sistine chapel.

'Thin crust' pizzas are easily available at Mumbai now. The ones that we have had at Spaghetti Kitchen or Pizza Hut tend to be more like roasted papad. Crusty, stiff, flaky.

The thin crust pizza slice at Prego nestled on your palm like a baby in your arms. Innocent, cherubic. Looking into your eyes with joy. Feeling at home with you. Without a care in the world. As if its very existence is to bring you joy and happiness. Innocent and pure. Trusting. Giggling each time you rock your arms. A smile which stays with you even if you move away for a while. You can go away but your heart remain with it. 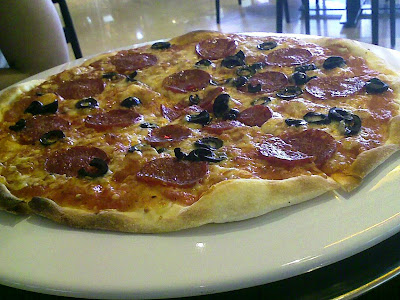 The pizza base was soft, pliant, luscious. Flopped as you held it. The pepperoni and cheese combined together in celestial harmony. You finally realised what the ad guys were trying to say when they used to describe the cigarette brand as "Made for each other". 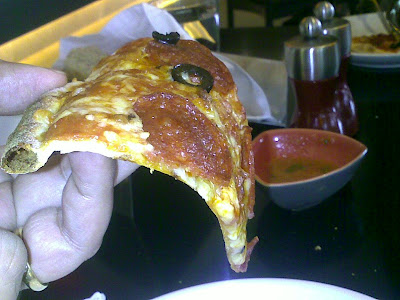 Lunch got over. I left southwards for Andheri E. Biding the day before I propelled towards the El Dorado of South Mumbai


A medium sized pepperoni costs Rs 500 (10 USD) at Preggo. Which is not much more than places such as Spaghetti Kitchen. Leagues ahead in taste of course. And in an uber cool five star setting. The quantity is slightly less for two good eaters like me. I would go for a large then.
Conti Fine dining Mumbai highs

Sassy Fork said…
Knife,I wholeheartedly agree with your opinion on their Pizza!
The place is so vibrant and the staff so friendly and attentive!
Fun watching them make pasta in front of you.Did u try the goofy specs at the end?
18 August 2010 at 05:07

theconservativefoodie said…
Place sounds great. As opposed to chain Pizza we are so used to eating at Pizza Hut's and the Domino's of the world !

I remember having a white pizza at a small university town called Morgantnown in West Virginia. Pizza can be so much more fun without the ubiquitous tomato sauce, plastered on nearly all pizzas !
18 August 2010 at 07:41

Eeshani said…
hey...as usual you make food 'sound' so different!!! well im sure totry this as even i think that the Pizzeria pizza at Not Just Jazz is the best!! but wat i love most are your similies...keep them coming :)
18 August 2010 at 09:33

Gaurav said…
hey... unbelievably freaky. i was just at the Preggo on Monday morning but only having coffee after a set of meetings in the Commerz building.

Scarlett said…
Looks yummmmm! Pepperoni is my favorite anyway. But the best place for a great pizza would be Italy, I guess :)
18 August 2010 at 11:38

Unknown said…
You were right here!!!! Though of course lunch with the wifey should be a private affair. but still... anyways.. good to know.. shall prego it sometime...
I hope you enjoy Fort - with all its lovely lunch places.
and oh- I had coffee with K finally today. It was great to meet her.
18 August 2010 at 12:41

@Eeshani: thanks. I guess I was inspired by the 'burger' episode of 'How I met your mother' which I saw on TV

@Scarlett, last time I went there I was two