on August 09, 2010
I remember Cinnabon from a crazy, surreal night at Dubai. A night scripted by Woody Allen. We were ravaged with hunger in the middle of a plush 'un'- mall, called Souk. Somewhere through the madness came the heavenly aroma of Manna wafting through the alleys of the Mall. And in the middle of the surrounding mayhem we bit into juicy, creamy, heavenly, chocolatey, cinnamon delights... a feast fit for a Sheikh. 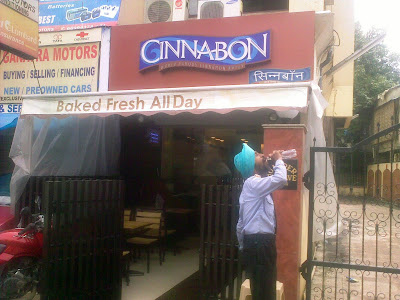 I recently got excited when I saw a Cinnabon open at Pali Naka, Bandra. Where Has Juice Bar used to be. I stepped in with the eager anticipation of a child in a candy shop. I was rather unimpressed by what I saw. The wares on display looked rather flaky, dry and lifeless in comparison to the hedonistic pleasures of the Cinnabon of Dubai. Plus they didn't have indoor seating and the prospect of sitting by the Pali Naka traffic didn't appeal to me. I walked off disappointed without trying anything. 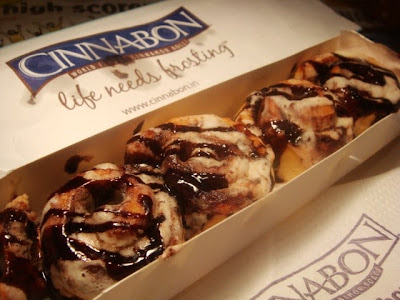 Then K picked a pack of mini Cinnabons for me one evening. I opened the pack after dinner. A couple of hours after she bought them. Photos over I bit into one. Expecting to be awestruck once again.

Imagine my disquiet when what I came across was stale, dry, crumbly, de-flavoured and of uneven taste. A far cry from what I remembered. I must admit that I didn't have the bun off the counter. Honestly, I am not willing to try it out again unless convince otherwise. We junked the rest. That's how bad it was.

"Baked fresh all day". Yeah right. And I am the Sultan of Dubai.
Bandra Bites Mumbai lows Woes


We get the freshest of cinnabons here right across where we live. And umm don't I like the toasted pecan nuts on it.
9 August 2010 at 03:07

Sue said…
I too wasn't impressed at all - just thought the buns were too doughy and not great at all. Won't be going there again - although definitely interested in trying out that new chocolate cafe that has just opened in Pali Naka.
9 August 2010 at 15:14

Kalyan Karmakar said…
@Pree, for once we lose out

Miri said…
I tried the one which has opened in Select City Walk in Delhi - exactly the same that you had and it was absolutely wonderful - my daughter and me polished it off!
11 August 2010 at 15:22