on August 08, 2010
It must have been about 13 to 14 years back when I ate my first sizzler.
This was at a restaurant called Pop Tate’s at Four Bungalows, Andheri W. Not part of our usual haunts then but we went there as someone in our group recommended it. I remember the place, whose name was inspired by Archies Comics, as being small and cheerful. That’s where I ate a sizzler for the first time in my life. Like a good Bong, I ate all the vegetables first. Was completely full by the time I started on the meats. Ended up disappointed at sight of the wasted meat and rice and felt that it was a big blow on my management trainee wallet.
Years later  I landed up at Pop Tates. This time at Andheri East (!), Saki Naka. Again with a group from work. Except this time I was the most senior person around. We stepped out for lunch to take a break. Wanted to go to the nearby Pizza Hut but it was full. So we jumped into a couple of auto rickshaws and inched down the heat, dust and grime of Dante’s Hell, also known as Saki Naka. We got off at a never ending red light and walked the final stretch to reach Pop Tate’s. A branch of the original one at Andheri W.
Pop Tate’s at Saki Naka was huge and cavernous. Different from the cosy place I remembered from the other side of the railway tracks. It was packed to the gills. The crowd consisted largely of people from nearby offices who had come for an unwinding Friday lunch. 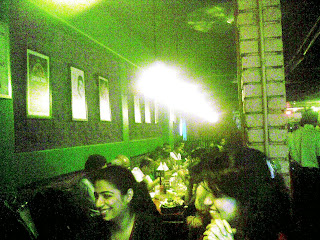 The décor was more 'American deli' with the odd Hollywood classic poster and old American grill ads. I didn’t note any sign of the Archies memorabilia though. Is it that the younger folks today don’t read these comic book as avidly as we did?
I decided to recreate history and order a sizzler. The sizzler arrived. Not with any fanfare despite the gravity of the moment. In fact, the sizzle had almost fizzled by the time it reached my table. A far cry from the fairly glorious sizzlers that I have had over the years since my first one.
Years of sizzler meals had now taught me to head straight for the meat unlike what I did the first time.  I had ordered a chicken barbecue sizzler. The chicken, I must say, was quite succulent. Leg pieces obviously. The ‘barbecue’ sauce tasted more like a North Indian hot chicken curry. Spicy and tangy. It  was plated with boiled corn in some sort of sweet, white goop masquerading as asauce. Chunky unappetising and, therefore, untouched boiled vegetables. Pale, colourless chunks of cauliflowers and ungainly hunks of carrots, far removed from the matchstick-like juliennes that they had to cut in Masterchef Australia the other day. No, calling them ‘veggies’ did not make them any cuter! They forgot to put fries, core to a good sizzler. A waiter later sheepishly came with a saucer of cold fries. 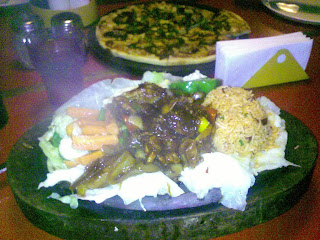 I tried some of the penne Bolougnaise which someone else had ordered. The Bolougnaise sauce was more like a Punbjabi kheema (minced meat) curry than anything Italian. The Thai red curry rice looked like butter chicken and rice. It did have a faint Thai flavour of lemon grass and coconut milk pushed deep inside. Also on the table was a Barbecue paneer pizza. It looked tempting despite the large chunks of paneer. The sauce was tangy. ‘Wine-like’ as one from our group described it. The pizza base was stubborn, unwieldy and steadfastly fought against any of your attempts to bite into it.
And yet the place seemed popular. It was quite crowded. I guess its location, the barren commercial lands of Andheri E, worked for it. As did the prices. They served alcohol and the prices on the menu were quite low. Cheap food, booze, uncomplicated tastes ... the modern worker’s refuge ... yes they have hit open a good business model at Pop tate's.
I went to  a Pop Tate’s outlet after thirteen years ... left to me would give it another twenty six years till the next try.
From deep inside Andheri E Woes

Bombay Foodie said…
I've only been to the Pop Tates in Malad. The crowd here tends to be great and the Paneer Tikka sizzler I order suitably Punjabi flavored with soft, fresh paneer. I guess I'd take that over Yoko's or Kobe's any day!
8 August 2010 at 21:26

Scarlett said…
There's no better place for sizzlers than Yoko's or Kobe's. I was told that Peter Cat in Cal is THE place for sizzlers. God Almighty...they make the worst sizzlers EVER! Those sizzlers are from another planet only. One big chunk of meat on a cabbage leaf, drizzled with some sauce & a couple of boiled carrots & asparagus on the side. Disgusting.
9 August 2010 at 13:22