Agent Green Glass and The Mystery of the Missing Cheese

on September 21, 2010
The irrepressible and lovely Agent Green Glass (AGG) invited us over for dinner a few weeks back.

AGG is real estate maverick. In a honeycombed city where  people convert balconies into rooms and rooms into two rooms, AGG converted a 2BHK into a 1 BHK. As Mumbaikars would tell you, 'BHK' stands for bedroom hall kitchen. AGG and her husband, A, have the best designed flat that I have personally come across. Their flat is wonderfully and aesthetically planned.  Lots of wood, pastel shades, masks, finky posters and AGG's comic book themed tables. All of this was conceptualised by AGG. Each corner could be the topic of a feature in a interiors design magazine. The photo below is a view of the entrance and this is just a tiny sample. I do hope that a design magazine or blogger covers their house someday. 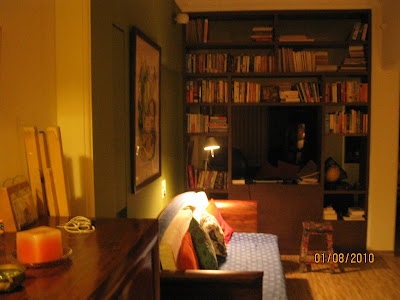 Our Chef for the night was the man of the house, A. He cooked in their uber cool open kitchen, separated from the hall with a self designed bar table. I noticed that A's and my cooking styles are quite different. I get flustered when people are around me when I cook. I need my peace and solitude. I would make an exception for Padma Lakshmi though.

A, on the other hand, cooked with élan as he chatted with us. A is also quite trim and fit. He breaks the typical Indian TV channel stereotype of men of food being super sized folks. Just look at the all the rotund food show anchors floating around on TV to know what I mean. (Note to self: don't miss the gym tomorrow after writing this!) 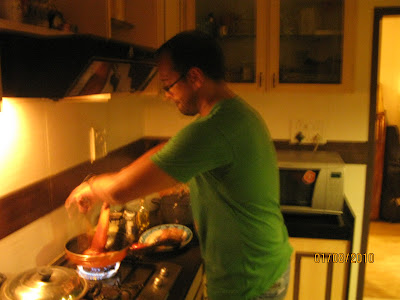 Another difference was our world view on recipes. I like to live on the edge when I cook. I follow my instincts these days and rarely look at recipes except for the odd pointer. Recipes bore me. The flip side of this disdain is that my guests would be subjected to a limited range of often non conventional dishes. Which is why I say that you should try the recipes I put up on Finely Chopped at your own risk.

A, on the other hand, uses a wide variety of recipes as bases and then builds on these. The result? A much more varied range. Representation of diverse cooking themes. And more authentic dishes. Our dinner menu bore this out. This was not the usual Bengali treating Bengali...  kosha mangsho, doi maachh, alu posto stuff. Our dinner was designed in Italy. 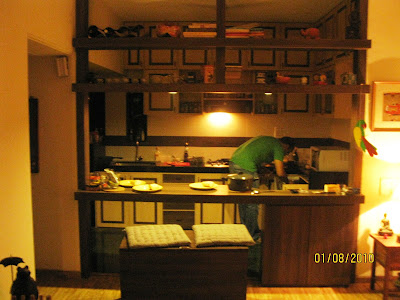 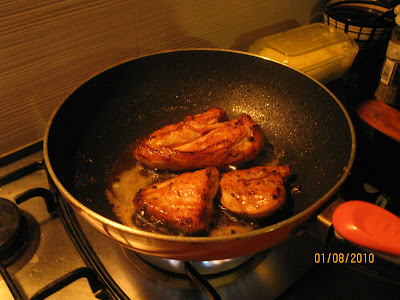 We had this with a Tuscan vegetarian pasta. I was a bit intrigued by the 'vegetarian' bit and told A so in no uncertain terms. I quoted Chef Max of Penne and pointed out that Italians apparently don't eat vegetarian food. A patiently told me about the Tuscan pastas which were tossed in fresh tomato and used Ricotta cheese as their base. The ricotta cheese was apparently the hero of the dish. One of the rare occasions when meat took a back seat. Well who would argue with a man who knew his food? And lifted weights at the gym most evenings?

A also told me about how aubergine or good old begun is as preferred in Italy as it is back home in Bengal.
Incidentally I noted this love for aubergine amongst the Chinese in Malaysia. They had a dish of diced eggplants sauteed in shrimp paste and olive oils. I had this at Arindam and Sasha's at KL and loved it.

A's pasta won over a pasta neutral person like me too. I loved the fact that the sauce discreetly held together the pasta without being too creamy or soupy. A told me that he dislikes pastas which swim in sauce. A point of view that we share. A's pasta was very well flavoured, subtle, allowed the individual ingredients to stand out. The diced egg plants were an inspired touch. Highlighting how the world would be a better place if we got over conceited pedestals and occasionally read recipes. 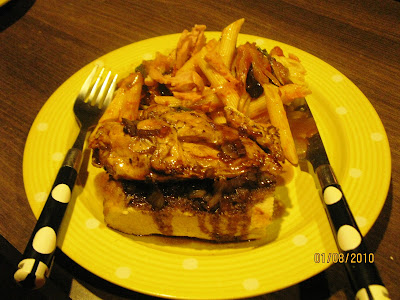 I dug into my chicken and pasta with gusto when A exclaimed.

"Oh shucks, I forgot to put something".

"You are kidding,"  I replied, "this tastes perfect".

"I forgot to put in the cheese," he said with a sheepish look.

"I was nervous as you were the guest. A food reviewer after all. I forgot in all the excitement and anxiety".

Damn. Need an image makeover for my own good I guess. 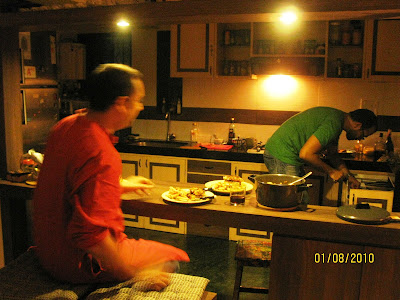 PS: A not only cooks, but he serenades too. Check this out. These are the songs that A and his band recently recorded. Too bad ladies. He is taken.

PS 2 Turns out that one of the first houses that AGG & A lived in after they got married could have been a flat where we lived in the early 80s! This was at Bank Plot, Station Road, Dhakuria, Calcutta. How six degrees is that?
Conti Finely Chopped Knights People The world of blogging

agent green glass said…
the knife! you are waaay too kind. and way too sweet. looks like A will have feed you many many times :) unfortunately, all i can offer is to prance about and refill your glass through the evening :))
but yeah, thank you for all the nice things you said. touched i am :)
21 September 2010 at 08:19

A song said…
Knife is such an appropriate name for a food writer...and people under that cool exterior that he talks about, A was sweating buckets cooking for him :) Its time I cooked another meal for you guys, say when?
21 September 2010 at 08:38

Pinku said…
two of my favorite bloggers on the same page...what a treat.

The house looks beautiful...and i spotted the comic stool in the corner as well.

Miri said…
Lovely house - and totally can see AGG designing it with her uber sense of cool! :)

The food sounds delicious - the pasta especially!
Pan to table chicken huh? Seriously amazing!
All my entertaining is done oven to table WONLY! (marinated overnight usually and baked/grilled about an hour before dinner.)
21 September 2010 at 11:44

hamaarethoughts.com said…
Nice house..Kitchen is good too with an island...its very popular concept in USA ,kitchen with big islands which are converted into breakfast nook..we have it too..
But the overall look of the house is too good...
Chicken looks tempting...
22 September 2010 at 01:03

@Pinku, AGG designed the chair too :)

@AGG, hey time to leave my keys behind again

Anonymous said…
Actually the Italian culinary heritage is probably the richest in Europe when it comes to veggies. They have the most amazing fruit and veg in their markets, all my Italian colleagues complain about the standard of produce in the rest of Europe. I recently read a fascinating book "Delizia!" which explained that what we know today as Italian food is essentialy cucina povera, peasent food, and for them meat was a rare treat. I strongly urge you to look into it, I think you´ll like what you find. Stuffed ricotta flowers is my favourite.
22 September 2010 at 21:57

Anonymous said…
Uhm, in case I came over all bumptious in my last comment, I just want to add I´ve never actually met a vegetarian Italian. And they don´t have a "vegetarian cuisine". And what they do have is peanuts compared to anywhere in Asia, especially India. But it´s just that they do some really really nice stuff with veggies, and it´s well worth looking into.
22 September 2010 at 22:11

SM said…
Nice write up and I too loved the house and the host.

I love recipes especially the ones that are easy to cook. Both the Pan seared chicken and the pasta sound interesting. Would help if you also managed to get the recipe out of your hosts and put them on the blog
22 September 2010 at 23:19