on September 16, 2010
I was at Nariman Point today and dropped in at Spoon, the Food Court at Inox, for lunch. I walked around and was tempted by old favourites Falafel and Kebab Factory. That's when I saw the Cambay Tiger Prawns stall and ordered a red Thai prawn curry there. I had heard good things about Cambay Prawns and thought that I'll try it out. 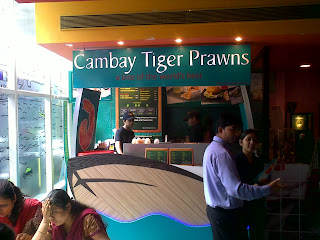 They got the food to the table. The curry looked disturbingly pale. I had a bite of curry and rice. Singed my tongue. The rice was reheated in the micro to volcanic levels. The curry was insipid. Didn't have any Thai flavours in it...no whiff of fish sauce, no basil, no galangal anywhere.

Then I bit into a prawn. My mouth immediately cringed as I realised that something was wrong. I bit into another prawn. Then it struck me. the They seemed to have taken their promise of 'fresh as sushi' a bit too seriously. The prawns were raw, uncooked. 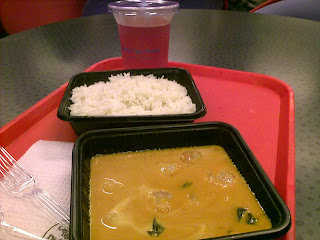 I took my tray to the counter and complained. They said that they'll fix it and apologised. The waiter came a bit later with the tray. I took one look at the tray and lost my cool. They got the tray back just as I had given it. Half eaten rice with curry on it, half drunk lemonade. It looked gross. The fact that they had served raw prawns was vile enough. The fact that they were callous enough to not even pretend that they cared took my goat. I am willing to live with mistakes. Insolence puts me off. Going home and Finely Chopping wasn't enough this time. I took the tray back, told them that this was complete crap and even dangerous to health and demanded my money back. They offered to cook it again. I had had enough by then. 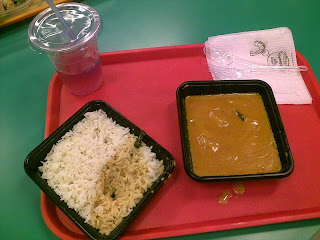 I went off to kebab factory and had a plate of succulent Afghani kebabs with naans. A helpful and apologetic manager (the gentleman in blue in the first photo) from the Spoon Food Court gave me the money back on behalf of the Cambay guys. Thankfully the raw prawns haven't created havoc with my system. Yet.

Next time I want to have prawns I would much rather go to a humble hole in the wall Gomantak joint than to any Cambay Stall. I would strongly advise you to stay away from them too.
Mumbai lows pisces Woes

Scarlett said…
Oh man, as if raw prawns weren't dangerous enough, you had to deal w/ their callous attitude as well. Horrifying, if you ask me. Now you know why I get so irked by bad service at restaurants. People open restaurants but they don't care to train their waiters in terms or service & customer care. Waiters too don't give a damn.
17 September 2010 at 12:08

Scarlett said…
As a rule though, stay away from food courts. I do unless I'm in a major major rush. I'd rather eat at a quick turn-around hole-in-the-wall joint than a food court.
17 September 2010 at 12:09

Kalyan Karmakar said…
Scarlett, as you know it takes a lot for me to create a fuss. I guess I was hungry. wasn't thinking. There was street food all around me at Nariman Point. What eff was I doing at the food court. I so miss the food courts of the Far East
17 September 2010 at 15:30