on September 05, 2010
I met Scarlett  a couple of years back. We connected through our blogs. Have been loyal readers of each other since. I love her sassy, tongue in cheek and spontaneous look at life. And I love the way she refers to me as a 'celebrity blogger'. What's life without a few delusions?  Interestingly she was shifting to Calcutta from Mumbai when I got to know her. It has been interesting to see Calcutta through her eyes as she lives in a Calcutta which I have not lived in. With unbiased eyes and no baggage as this is her first stint at Calcutta. 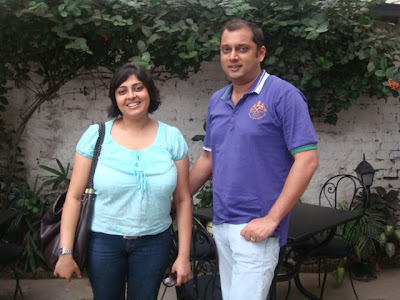 I caught up with her at Calcutta this time. The restaurant she chose was so not the 'Calcutta' I knew. It seemed more like a place at Mumbai or Bandra. Guess it took someone who was seeing Calcutta with fresh eyes to introduce such a place to me. This post is about our lunch at Casa Toscana. A place Scarlett had earlier written about on her blog.

Casa Toscana at  Exide, Calcutta, is a new age Italian restaurant. Of course no place at Calcutta could be bereft of memories for me. So Casa Toscana is located opposite Nehru Children Museum. A place whose Ramayan and Mahabharat tableus I had spent hours lost in in my half pant days. 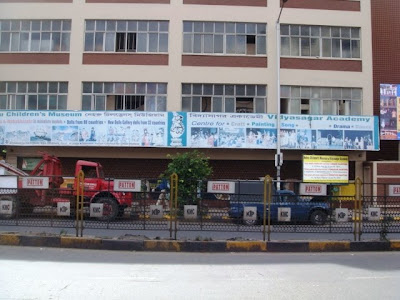 The decor at Casa Toscana is very charming and rustic. Its got the look and feel of a European villa with its earthen walls, aesthetic place settings and aristocratic rustic yet comfortable furniture. They have an open kitchen at the end of the restaurant and I was enthralled to see them plate the food. They have an outdoor section, which as Scarlett told me, becomes a candle light dinner section at night.

There were a group of girls in the tables beside us. In saris. Possibly from a school or college session. And two girls at the next table. I listened to snatches of their conversation much to Scarlett's embarrassment. I was really pleased to hear the two girls talk about the merits of Mozzarella versus Emmenthal. And the girls in sari yell out that they wanted individual desserts when someone suggested sharing desserts. I was home. I was in a city which unabashedly loves food. I was in my city. 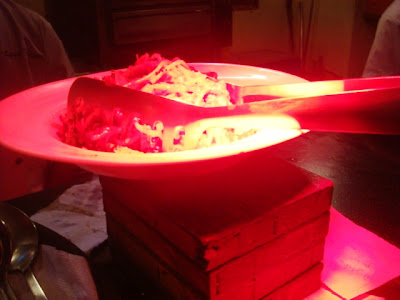 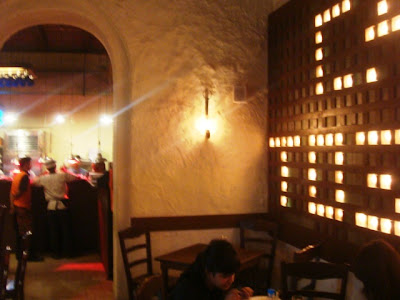 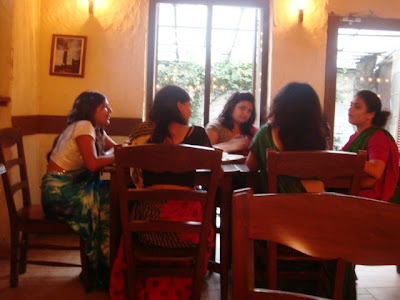 We had a chicken wrap in chilli dip. Mini chicken roulades with a bit of rosemary and the odd bite of cheese stuffed in between . Good in parts. A bit chewy. 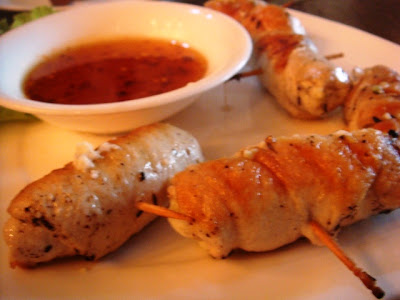 The pesto was stellar. It was everything that Scarlett promised it would be. Very well flavoured. An experience which improved with each bite. A deep, resonating taste akin which reminded you of the Satyajit Ray's deep baritone. The master lived a few kilometres away from Toscana. The cheese was very distinguished and there was no excessive cream. I asked for spaghetti much to Scarlett's disquiet. "Too messy to eat".They had tossed it very well though. I suddenly heard Scarlett shriek the way I would if I saw a rat. "There's so much fat in the bacon. Fattening". I spotted the bacon, smiled as if I had fallen in love for the first time in my life, and dug into the fatty Garden of Eden. 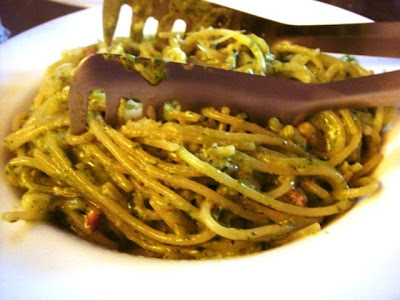 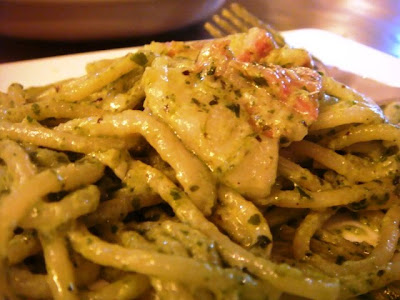 Our dessert of apple pie was really good. The crust was just right. Firm not chewy. Had a slight caramelised touch to it which was quite seductive. The apple base was quite elegant. The ice cream that came with it was rather hard and frozen as Scarlett pointed out. 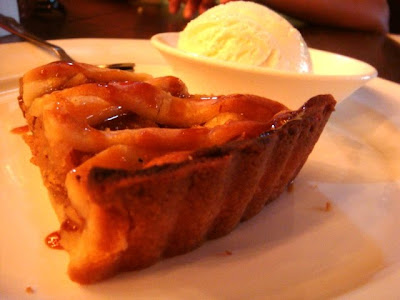 Truly a wonderful afternoon and I am not just talking about the great company. Or my Flurys rum balls and strawberry cubes that Scarlett got for me. 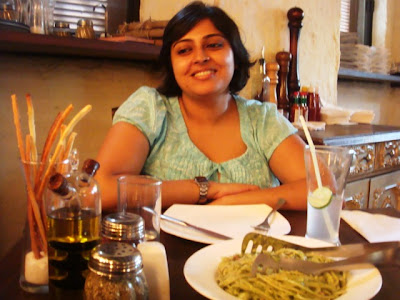 Note: For the record I must say that I had the runs a couple of hours later. Either the heat got to me. Or my stomach wasn't used to relatively fancy places after all the hole in the walls I had recently been to. I did what Bourdain would have done. Popped two Imodiums and went out for dinner.
Calcutta reviews Conti Finely Chopped Knights

Kalyan Karmakar said…
@Scarlett: Runs. That's the secret of my weight control :) Always great catching up with you