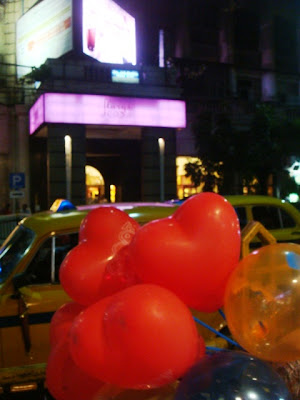 This post is dedicated to my Mesho, a very generous host, who told me last night about how happy he was to see the buzz back at Park Street.

A while back I had written about the difficulty of getting an empty table at Bandra on a Friday night. I faced a similar situation last Friday night at Calcutta's Ibiza, Park Street. I met up my college classmate Jaggo for a Presidency College Batch of '95 reunion. If just two people qualify for that.

I stumbled across Kusum Roll Shop while I waited for her. I have already burnt bridges with my Arsalan post. So let me go on record saying that I am a Hot Kati Roll man and not a Kusum one. I was tempted to have a roll before dinner. But thought I should not stretch my post Casa Toscana, Imodium supported, stomach. I looked across at Flurys and the ill fated building which had a fire recently as I waited for Jaggo. Life stops for no one it seems and Flurys was back in business. 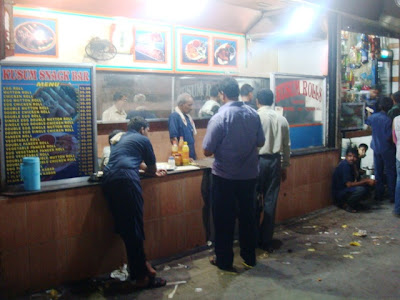 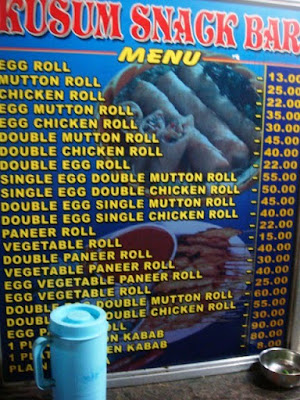 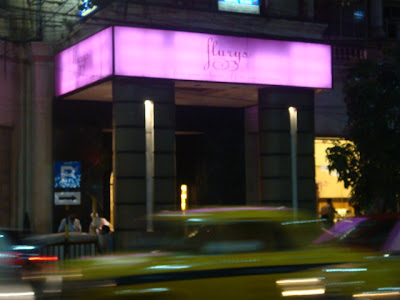 Jaggo came. My plan was to go to the college goers favoured den of Oly Pub, a place I had never been to. This did not work out. There wasn't a single woman, even on the upper floor there. I didn't want to break the rhythm by taking J. In fact I was pimped twice while waiting in front of Oly Pub that evening. We ran out.

We then went to the strangely named, classic Chinese place, Bar B Q. We went up. There was a huge mob waiting to be seated. We left. Botoxed Oasis didn't seem to have the old charm. And I wasn't impressed by my earlier visits to Moulin Rouge in the last century. Mocambo was crowded and my usual of 'devilled crab and Fish a la Diana' didn't seem a good idea to my abused tummy. We didn't even try Peter Cat with its legendary chello kebabs and serpentine queues. Jaggo suggested One Step Up, a Johny Come Lately. Whatever I heard of it reminded me of what a heckler once shouted in a Connors versus Aggasi match, "Come on Jim! You are a legend, he is a punk". 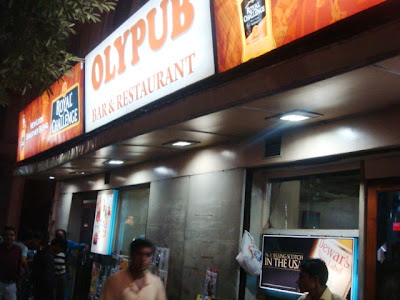 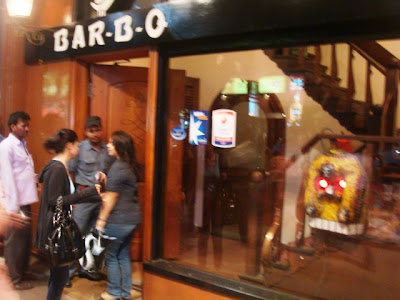 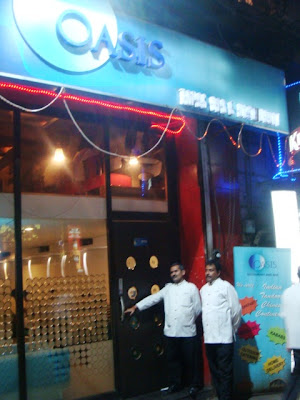 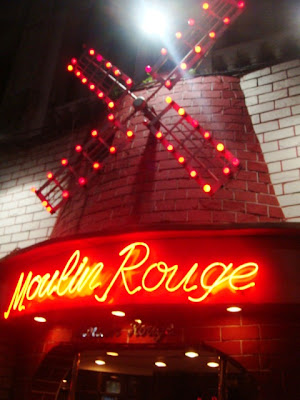 I suggested Tangra or Kolkata's China Town. Again another college hangout which I had never been to in college. I was after all a 'bhhalo chhele' or good boy in college. Jaggo said it would be too far and suggested Tung Fong. A place whose lunch buffet I had earlier gone to with my mom and brother. I had loved the mommos then. I discovered that Tung Fong is run by a Chinese family from Tangra. They also run Kimling at Tangra and a restaurant called Beijing. Apparently the menu at Tung Fong was similar to that in the Tangra restaurant. I felt placated.

The ambiance was quite elegant and many steps above Tangra I am sure. Jaggo told me that the restaurant was pretty large and never over crowded despite its apparent popularity. 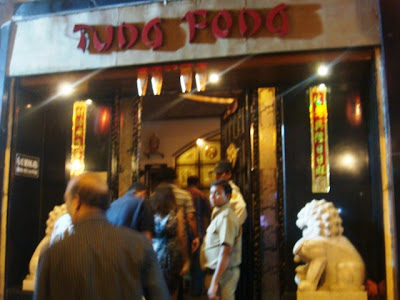 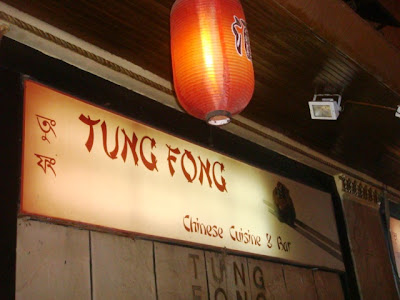 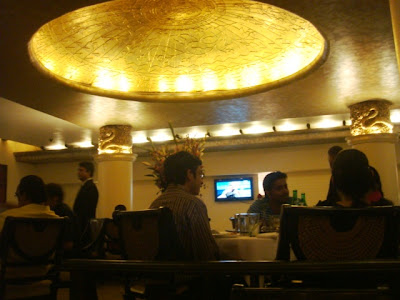 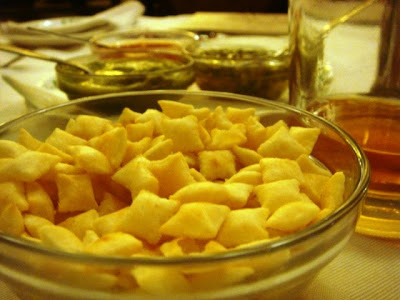 J was clearly at home at Tung Fong. The waiters smiled at her and the steward, Andre, paid special attention to our table. Jaggo knew the place and I left the ordering to her. I was proud of the choices she made through the evening. At times it pays to give up control. Specially when you come to a restaurant with someone who loves the place. 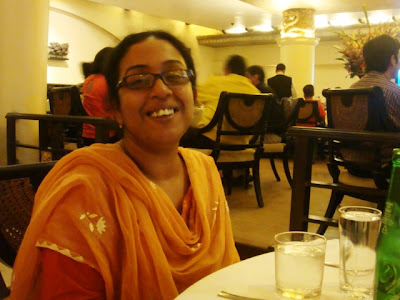 We started with her choice of smoked lamb. The best thing at Tung Fong is that you can order small portions as well and try out a number of things which we did. The smoked lamb was fantastic. Lived up to its star billing. Very succulent in contrast to my apprehensions of it being chewy. I loved the bed of finely chopped onions that it was served in. Jaggo made a beeline for the finely chopped chillies. This dish is strongly recommended. 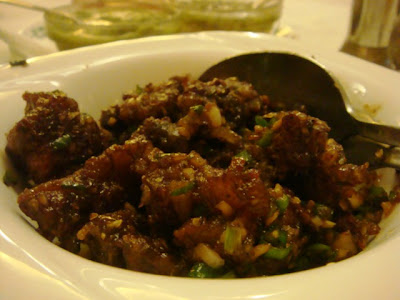 Andre's recommendation of red chilly chicken was competent without inspiring awe. The red chilly paste lent a exciting heat to the dish. Not up my alley though. I have rarely taken to red coloured dishes. Though this is admittedly one of the better ones that I have eaten in this genre. 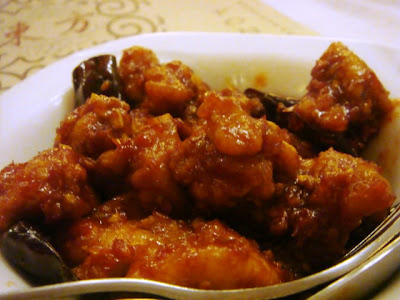 Andre made up with his recommendation of chilly garlic prawns. Very different from the very brown monstrosities served under this name at Mumbai. Here you had creamy silky prawns with a scent of garlic. Delightfully understated prawns served in some pretty loud and violent chopped green chillies. The dialectics were historic indeed. 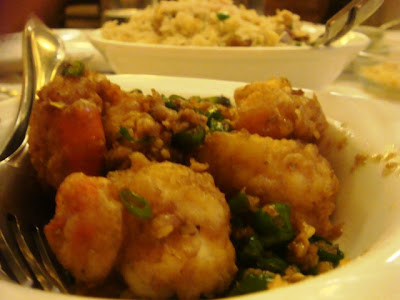 We paired this with Jaggo's recommendation of Yang Chu fried rice. This was spot on once again. Nice firm yet big grained rice. Green peas to cut the salt. Very fresh shrimps and very tender lamb. This was seven star stuff. 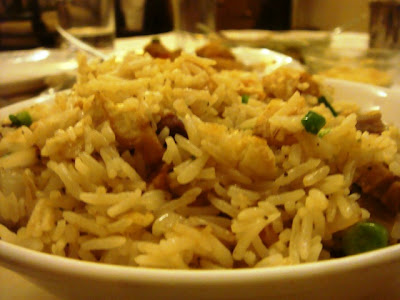 There was an unscheduled side plot to the dinner. That of 'Deconstructing Harry'. Jaggo had apparently observed a number of things about me over the eighteen odd years that she knew me. She likes to read people. What were these insights and inferences? Were they true? How did I take them? Was I offended? Was I pleased?

These, unfortunately, are answers you would know only if you were at our table that night. 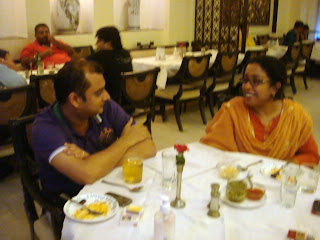 What I can tell you is that three side dishes including a prawn one, a main course and a few rounds of premium alcohol in a fairly grand (by Mumbai standards) setting cost us just about Rs 1600 or 30 odd USD. Advantage Kolkata. 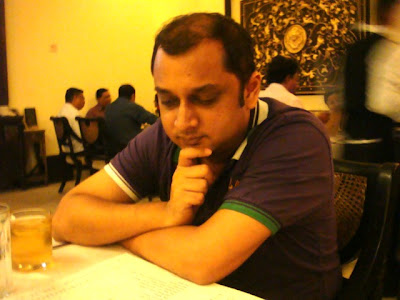 The last order at Tung Fong, in the heart of Kolkata's night street' is taken at 11 PM. I came across something similar earlier at Mocambo too.
PS: I have been unable to reply to any of the comments on the blog of late. Please keep them coming. I am reading them all. Just a bit strapped time right now. Will answer when I return to base.
Calcutta reviews Oriental People photo blogs

Molly said…
Every time i am in calcutta i lans up there whether its cousins reuniting after a long time or simple my masi and mesho's 40 th wedding anniv....always good food.
7 September 2010 at 21:50

Kalyan Karmakar said…
@Sudeshna, hope you have such a reunion soon

@Sassy Fork, there is actually a chinese breakfast spot in Cal. Was too early for me though

@Moly, I was quite impressed too