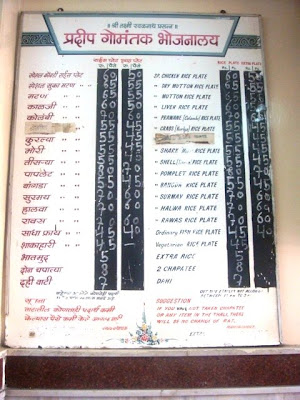 I wanted to go to a Gomantak restaurant while I still had the taste of Apoorva's Mangalorean Gassi fresh in my mouth. Gomantak cuisine originates in the coastal Maharashtrian region of Malwan. The key difference between the Mangalorean curries and Gomantak is the use of tamarind in the former versus kokum in the latter according to the owner of Apoorva. What was this tamarind versus kokum divide all about? I was intrigued. I had to find out. 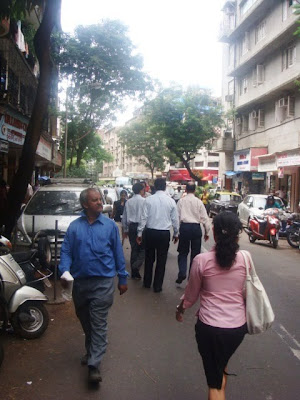 It was a crazy day. Sticky E's to be written. Cakes to be cut. Clients in distant suburbs to be visited. I called MumbaiCentral (MC), the lawyer who tweets, the criminal lawyer who is my food partner in crime, and we decided to go for a quick lunch. "Need to get back by two' as I said at 1.20 PM. 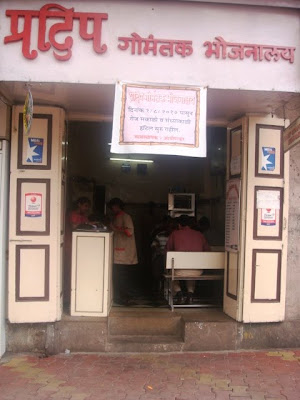 We met at Pradeep Gomantak, the Gomantak eatery down the lane at Fort. It was a small place. More like a garage than a restaurant. Very simple sunmica adorned benches and tables.  Popular. The sort of place that always holds the promise of good food. Food which nourishes the soul without distraction.  Simple, uncomplicated.  The sort of place where you shared a table with others. If its two of you then they ask you to sit beside each other instead of opposite each other. You had to queue up to get a seat. People were eating earnestly. With gusto. The food looked like it would be fresh. The Goan MC was in her elements here. She had earlier told me that this is where she came when she missed home food. The owner knew her. As did the staff. This was her Candies. 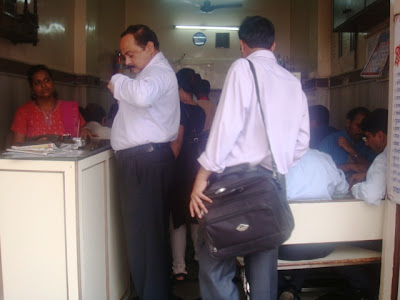 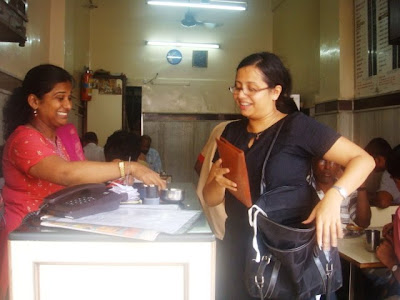 Pradeep is owned by a gentleman named Mr Amonkar. I have often seen him and his daughter at the  when I passed by the restaurant earlier. Today Papa Amonkar wasn't there. His able daughter was running the show with an eagle eye, making sure that things were perfect. She proudly told me that their restaurant was around forty years old. They obviously had a great thing going as apparent by the steady rush of customers and the happy content looks inside. The waiters were efficient and polite. A few more of my visits and they would have mastered photography too. 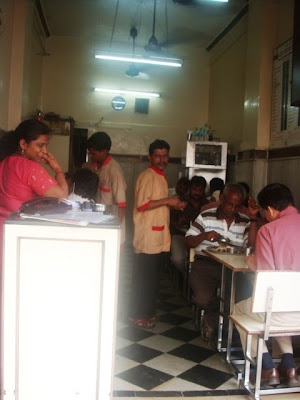 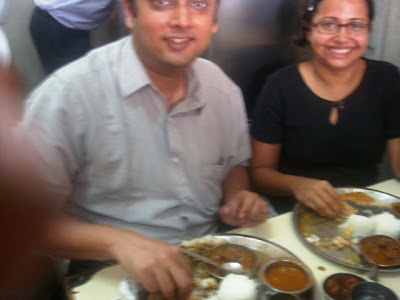 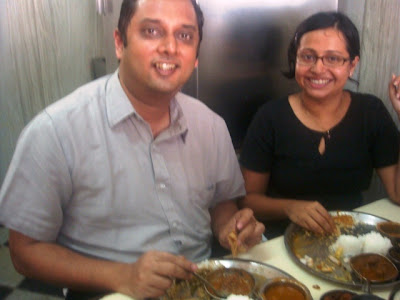 MC explained the mechanics to me. You order thalis or set meals here. You apparently get a vegetable dish (black peas today). Sol kadi, the kokum and coconut based digestive which I love sipping on. MC mixes it with rice and has it. That's apparently the correct way. There is a 'curry' which is standard. MC said that the curry is seasoned with fish bones and entrails.  They would replenish your curry on the house if you wanted more. MC wasn't too sure about the sol kadi. I asked for seconds in any case. There were rice and rotis. The latter an alien concept to eat with fish for Bengalis and Goans too according to MC. What varies in the thalis are what she calls the 'item numbers'. The meat or fish dish of your choice. 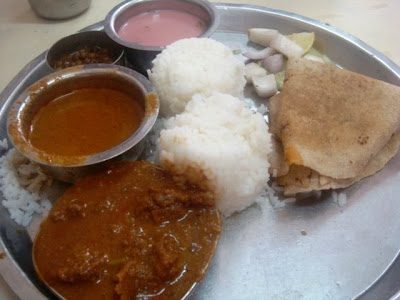 I saw the movie Jaws when I was 5 yrs old at Rasht, Iran. Was terrified and shut my eyes. Asked my mom to tell me when they didn't show the beach on the screen. I couldn't get back into the water for years after that. Even swimming pools. So I readily agreed when MC suggested that we order a Mori or Baby Shark thaali. 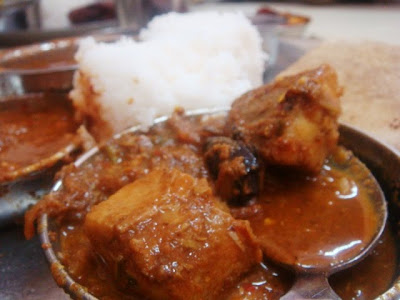 
To me the Gassi was about the intense and yet restrained passion between Amitabh Bachchan and Rekha in the song Salam E Ishq.  The Gomantak curry on the other hand was peppy, lively, uncomplicated, catchy, feet tapping and connected immediately. More in the Malaika Arora's Munni badnam hui genre.Click on the links and you will get what I am trying to say.

The mutton masala seemed a lot paler in comparison to the fish curry. Looked fiercer than it tasted. MC pointed out that this was without kokum. We ordered a side order of fried prawns. These were a bit too salty and over fried. Lunch was almost over when I remembered and ordered my favourite Gomantak dish, Bombil or Bombay Duck fry. Again the batter was a bit salty. But the soft, succulent, juicy, cuddly fish made up for it. This was a fitting finale for the lunch. 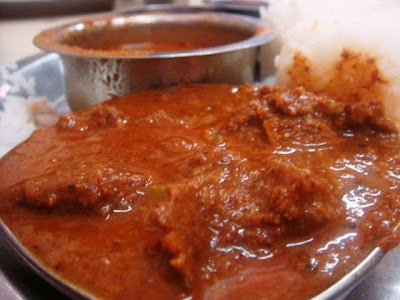 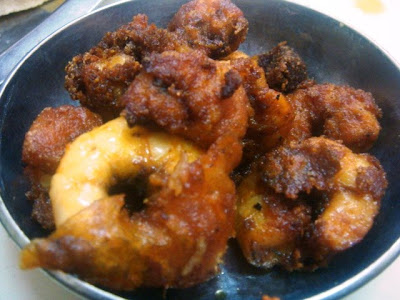 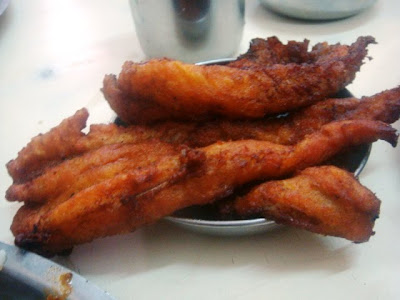 The two of us ate for Rs 165 or about 3.5 USD. As MC later tweeted, "Day of total chaos. Lunch was the only sane point." Well, Pradeep Gomantak was that sort of place. What 'Happy Meals' are really all about. 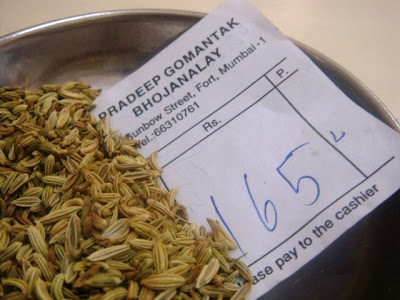 Pinku said…
gosh...u have made me so very hungry...

Kalyan Karmakar said…
@Sassy Fork...though a Lavni number would have been more appropriate

Kalyan Karmakar said…
Vikram, do you mean Goan? Mumbai Central is a Goan. They are in tamarind team. They apparently use Sichuan like peppers to cut the fishy smell of curries. Ask her more if you are on Twitter
24 September 2010 at 19:38

Vikram Singh said…
So, in this whole debate of Gassi vs Gomantak, where does Konkani food fit in?
24 September 2010 at 19:43

Vikram Singh said…
Yes I did mean Goan. Thanks for that Kalyan. Think I need to get involved with Twitter then.
24 September 2010 at 19:44

Sassy Fork said…
@ Vikram Singh:
Gassi is from Mangalore ...South Karnataka.Goan food has more Portuguese influence.
The Konkan Belt is the coastal strip from South Maharashtra through Goa,Karnataka to little bit of Kerala.People who speak the Konkani language are called Konkani.Some are Hindus,some Muslims and some Christians so Konkani cuisine is really vast as it encompasses all of them.
Malvani cuisine is again a type of Konkani cuisine as Malvan is a coastal town in Southern Maharashtra.
24 September 2010 at 21:29

Unknown said…
You live by simple pleasures everyday and leave us hapless ones to feel tortured. Just 165? I am moving back to India. I miss the variety that Indian has to offer. Though we don't eat out Indian much here, but I am peeved to see how they start and stop at tandoori chicken and butter chicken when it comes to Indian!
25 September 2010 at 02:15

Miri said…
I luuurve Gomantak food... you did good! :)