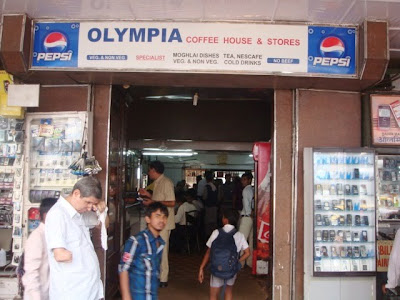 Jamshed Uncle strongly praised the biriyani at Olympia when I was discussing Fort and Colaba eats with him. I went there the next day for lunch. It was shut for Ramzaan. I went to Martin's instead. My fellow table mate there praised the biriyani at Olympia too. He referred to it as 'Katchi Biriyani'. One has always known of the Rann of Kutch in Gujarat thanks to high school geography. As I wrote this I realised that Raan is also the Hindi name for lamb shanks. What a tasty coincidence.

Well, the holy month of Ramzaan finally ended. I waited impatiently for my biriyani. And jumped when I got an opportunity to go. With me was my new food partner in crime at Fort, criminal lawyer who Tweets, MumbaiCentral. MC scoffed when I suggested Olympia. "I thought you wanted to try out uncharted territories". I had to explain that I had never been to Olympia before. I had had my first brain masala from there though. A takeaway at a friend's place in my early days at Mumbai.

Lunch conversation with MC was interesting. I peppered her with questions spawning from from Grisham novels, A Few Good Men and Boston Legal. Yes, she does try cases. No, all lawyers are not great orators. Criminal cases are not just about murders, corporate or divorce cases could qualify too. She only has to wear a lawyer's gown at the High Court. Yes, it is air conditioned. No, they don't have business 'targets'. They can't really advocate an increase in crime rates after all! 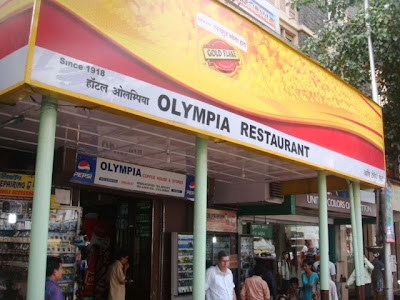 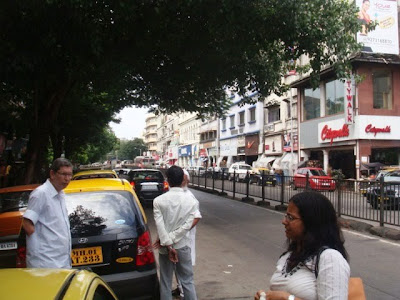 Olympia is a Muslim restaurant at the beginning of Colaba Causeway, opposite Mondegar's. The smiling owner told me that his family owned Olympia for more than sixty years. His father had bought it and it used to be a Iraani restaurant earlier. This probably explained the Irani Cafe feel to the ground floor. It had the round tables and the Goldilock chairs typical of Iraani Cafes. The place was buzzing with happy and hearty eaters. 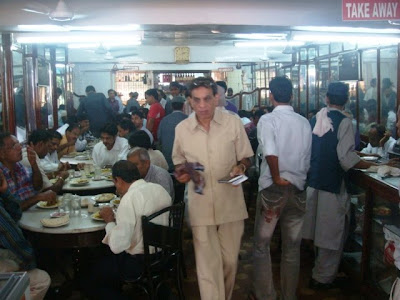 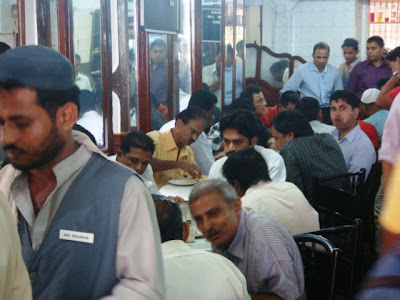 MC and I headed upstairs to the 'Women & family section'. Well, we food lovers do stick together through thick and, uh, thin, after all. She squealed when we reached the section. "They have air conditioned it". The owner told me that they used to have an Iraani Cafe feel upstairs too. He had 'modernised' it now. I wish he hadn't. It looked like a shady wedding hall from the suburbs. Piped steel furniture, brownish walls. Didn't have the charm of the  'non family and non women's' section. 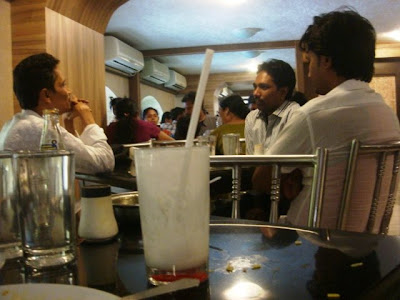 The service was prompt and efficient. We called for a couple of what the menu card proclaimed as specials -mutton fry masala and mutton biriyani. I timidly suggested chicken but our Goan criminal lawyer would have none of that. We also ordered the day's special, 'daal gosht' with parathas.

The mutton fry masala was a work of art. Reminiscent of the famous Murshidabad silk which made the British greedy about India. The dish consisted of admittedly tough mutton chunks in a very elegant and delicate curry. I am normally not too fond of gravies in Indian restaurants. But I was decidedly smitten by the curry here. For the curry was no ordinary curry, it was sheer Urdu poetry. I longingly lapped it up with the nice, firm parathas. I had the look of a teenager in love on my face. This was a dish whose memory I would never forget it. 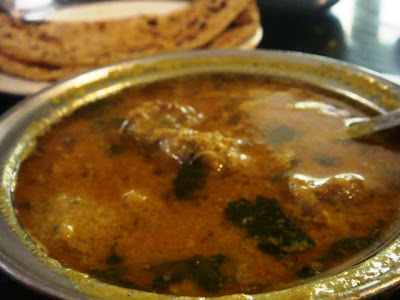 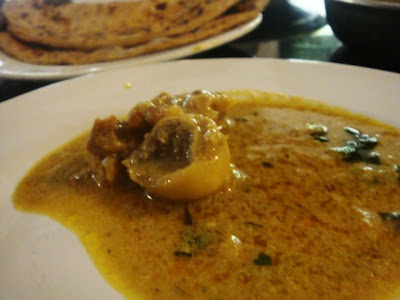 The daal gosht underlined the ironies of life. If the meat in the mutton fry masala left me unimpressed then the mutton of the daal gosht had me beaming in appreciation. It was really succulent. But the lumpy daal left us cold. It seemed like a wannabe Dhansaak at best. We didn't finish it. 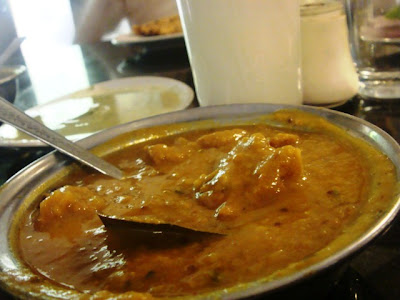 Then came the much awaited biriyani. I waited with eager and impatient anticipation as our bearded waiter got it to our table. My expectations were high. Would it live up to its hype?

Well, it did. The rice was nice, firm grained and well flavoured. It did have masala. But my adulterated Bengali heart didn't mind it as the masala peeped out discreetly through the rice. It didn't bulldoze the dish. I like the touch of fried onions it it. No Bengali would recognise this as 'biriyani' till you put a placard on it. But as a standalone dish, it touched the sweet spot. 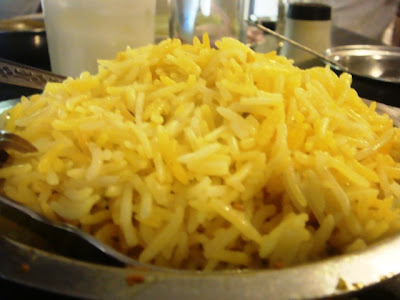 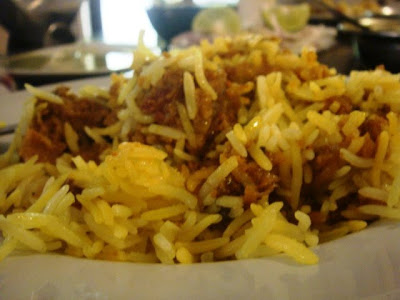 MC looked at each other, smiled and mouthed 'caramel custard' in unison. The custard flattered to deceive though. Something marred the experience for us. We soon realised that there was a touch of green cardamom or elaich which bludgeoned the taste of this simple comfort food. We left our custards unfinished. 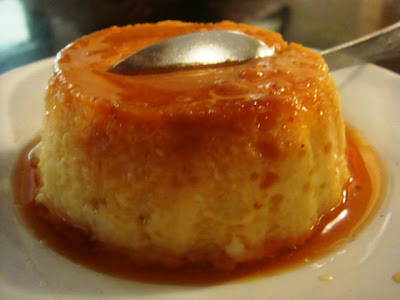 This decadent Mughal banquet (with a fresh lime & a nice lassi) , in the 'AC' section, came to all of Rs 280 (6 USD). That too after we pointed out the fact that the waiter had forgotten to bill us for the biriyani. 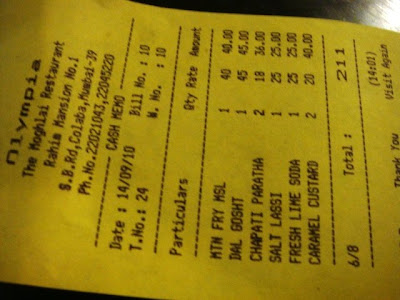 My favourite biriyani in Mumbai continues to be that of Kakori House, Bandra. The only one which can break my loyalty to the biriyanis of Calcutta.

Update: Went to Olympia twice since then. Got addicted to the biriyani and chicken fry masala, the consistency of service, the tandoored mutton chaaps, the fact that spice and more from Sydney, who entrusted me with choosing our spot for lunch, loved the biriyani. Also found out that the restaurant was established in 1918 and that the lassi and fresh lime glasses have a red base so that they are not mixed up with regular drinking water 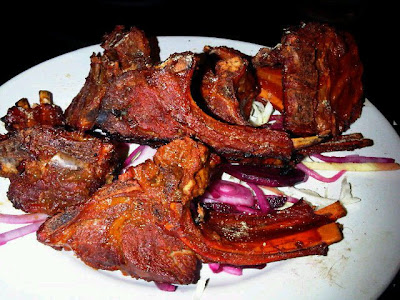 Scarlett said…
Of course you had to put up pictures of the biryani. I miss Bombay biryanis!! :((

vandana rajesh said…
Good read...my sister is a big fan of Olmpia Biriyani...have to try it next time in Biriyani...ur posts actually take me the the eateries and by lanes of Mumbai and it is truly such a wonderful experience.
16 September 2010 at 12:26

Vandana, this period at South Mumbai has been the most satisfying spell of writing for me

@Amarnath, Kutchi? I don't think it had whole GM

Anonymous said…
If you like biryanis so much, you should definitely try Chettinad style biryani and post a review of some chettinad restraunts.
23 September 2010 at 03:07

Kalyan Karmakar said…
are there chettinad restaurants at Mumbai?
14 December 2010 at 18:33

Unknown said…
Hi we were in Elphinstone college and this was our favourite joint and VFM this was in 1985 and even now after 30 years it is still the same Mutton Masala, with this you should combine the plain brain fry and the chutney and onions trust me one of the mind boggling culinary experience at a very less budget.
7 July 2016 at 21:39

Unknown said…
Great information you have shared here, through this post. Thanks and keep sharing such valuable updates through your side.