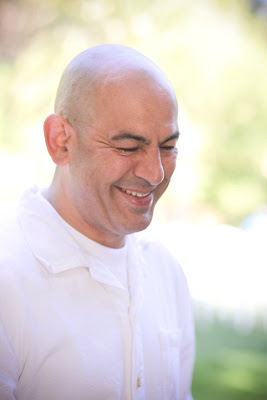 I picked up his book, 'Eat My Globe', on a flight to Calcutta. Formed a connection by the time I reached half of the first page and hungrily read up the book. I was tickled to see some similarities between us. He is half Bengali. I am full. Both born in Britain. Both our fathers were doctors. Simon Majumdar was born in the North of England, me in the South.  He stayed back though. Life led me to Mumbai via Rasht and Calcutta. And yes, we both revere Bourdain (I am taking the liberty of writing this on his behalf here).

Since the time I read Eat my Globe, I found his blog, Dos Hermanos, which he writes with his brother Robin, and followed it. Found him on Facebook and we became friends. He'd occasionally act as a patient sounding board for me, a stranger to him. Despite being a celebrity all his chips were on his plate, not on his shoulder. Since then he has written another book, 'Eating for Britain', and will appear on Iron Chef as a judge. He often Tweets about going for runs. Something which inspires me to hit the treadmill, and amble on it. I am 'full' Bengali after all. And the best thing is that he is someone I precociously count as 'one of us'. He did not start off as a celebrity chef, or a professional food writer. He was and is a blogger. A Blogger who at the age of forty decided to chase his dream. That's what makes him different.

This morning I opened Facebook and saw that he had linked Finely Chopped on his Facebook page and wrote, "If ever a food blog made me want to revisit a country, this is it. A must read for lovers of the food of India"

I have not stopped beaming since. Then I went to Twitter and saw this tweet from him: My favourite food blog of the moment http://finelychopped-k.blogspot.com/ A must for lovers of the food of India

So come over Simon, we will hopefully Eat My India together.
Food musings People The world of blogging

Rushina said…
Oh well done ! So happy for you!

Anonymous said…
Yippieee!!! So proud of you....
You could have taken me out for lunch ...but alas!

I seriously think you should make an attempt to write a book now.

miles to go for you...I hope this gets you to start thinking about penning a book of your own too...

Kalyan Karmakar said…
Hey thanks Rush, you know who wins my award for food blogger who lives her dream (female) right? :)

Thanks Soumik, we should go to Hangla

Thanks Snigdha, treated myself to lunch for that :)

@Curry Spice, you flatter me too much :)

@Ips, you bet, that too in the middle of Fort

@Ash, I can always depend on you to read till the last line :)

Hey Thanks, Shaheen, need to celebrate over some of your pesto rolls

Pinku, miles to go indeed, and to convert thought into action is the point. As Marx said (I studied sociology in Calcutta) "philosophers have interpreted the world in many ways, the point is to change it"
17 September 2010 at 15:25

Anonymous said…
Cant believe that I didnt discover your blog in my 4 years in Bombay. Missed out on so many places like Snow Flake and what not.... But then if one cant eat, then atleast read.
17 September 2010 at 23:20

Unknown said…
You have done us proud, you FULL Bong. Now get your chef's hat on and get down to some cooking in your kitchen and laying it all out on that cute new dining table of yours. Its been a while, hasn't it?
21 September 2010 at 02:23

Kalyan Karmakar said…
Hey thanks Pree. Did make a fantastic chicken hakka noodles. Damn, should have taken a picture on the table. I fired some fish today. Does that that count? We ate it on the sofa as we watched TV though
21 September 2010 at 02:47

Anonymous said…
Why am I not surprised that he complimented you? That Dr. Majumdar's chele always had such good taste!
23 September 2010 at 03:08

Unknown said…
Simon sees right. Your blog to me is the best I have come across from Indian foodies!
4 November 2010 at 16:05

IshitaUnblogged said…
I do agree with Simon... there's a lot of spontaneity in your blog Kalyan and your love for food oozes out of the posts. I have to get a hold on this book:)
18 November 2012 at 01:50