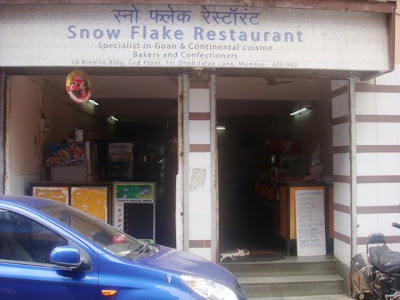 I still can't believe that I had never heard of Snow Flake till yesterday. This after more than a decade at Mumbai. This after being addicted to Goan food. The only explanation that I can think of is that of location. Dhobi Talao, where Snow Flake is situated, is not as glamorous or with it as Martin's , Colaba.

Yesterday was a strange day. I thought that it was Judgement Day as we were stuck in traffic on the Sea Link. The only refuge of what Twitter calls the Traffacked. That's when the lawyer who tweets and eats, MumbaiCentral, texted me.

"Where do you want to do lunch today? Goan at Dhobi Talao or Keralite Muslim beef and parathas?"


"Ok then let's do Christian. That would be secular. We did Muslim yesterday at Olympia"

Come lunch time and we headed down from Fort towards Metro Cinema. The grand single screen theatre which has been converted into a multiplex. It's original art deco design thankfully preserved. We took a left from Kyani, the famous bakery. Crossed Bastani, another Irani bakery. No one had told me that it had shut down. We went past a residential building with balconies which would have been at home even in Vienna. I walked down the sleepy road and stepped off the time machine as M C pointed right. 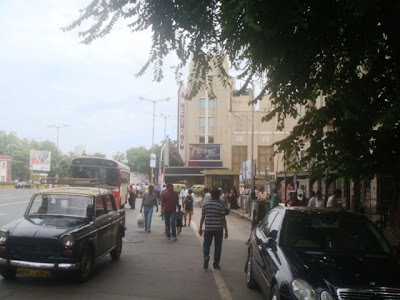 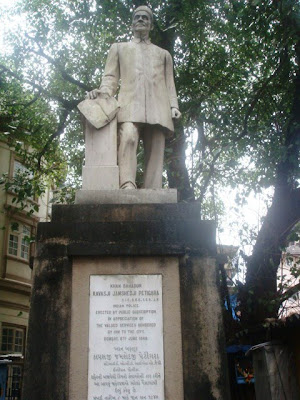 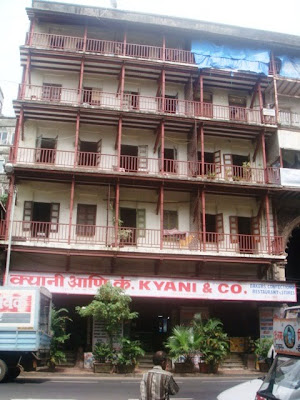 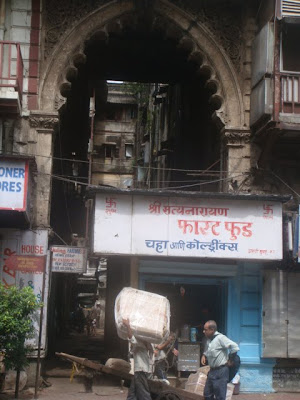 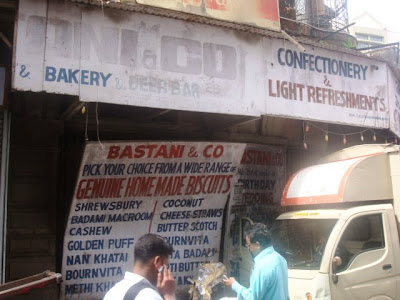 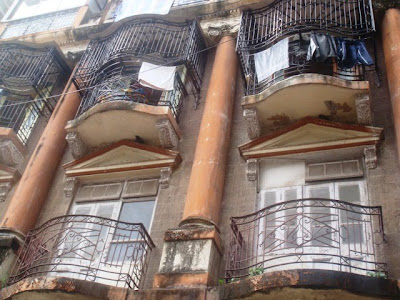 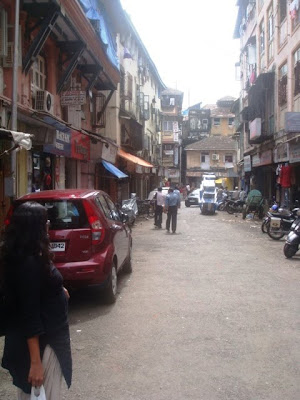 The signboard said 'Snow Flake'. That didn't sound every Goan or restaurantish to me. We entered the restaurant. There was a somnolent, lazy feel to it. Felt as if one had entered someone's house in a village or in a small town. The sort of place where the doors are never shut. There was a sense of stillness and calm. There wasn't a whiff of commerce anywhere. There was a heady aroma of Goan cooking wafting all over, welcoming hungry itinerant souls. Were we at the right place? Did we actually walk into someone's house by mistake? Did I break the law? Would I need a lawyer? Wait, I did have one with me. So I followed MC and went in. 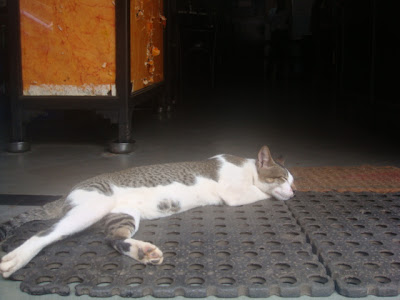 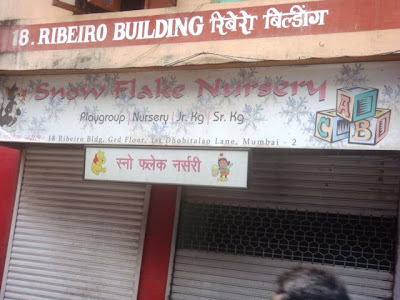 The restaurant looked like an Irani cafe. The same sort of chairs and tables. A few tables were occupied. As  MC pointed out, most were eating Mackeral curry and rice. There was a lady sitting at the counter and later a gentleman with a white moustache. The owner, Mr Ribeiro. He told me that his family had run the restaurant for more than sixty years. And that it was a bakery before this. A Christian and not Irani bakery though. He said that most restaurants of that period apparently had the sort of furniture that we now associate with Irani Cafes. 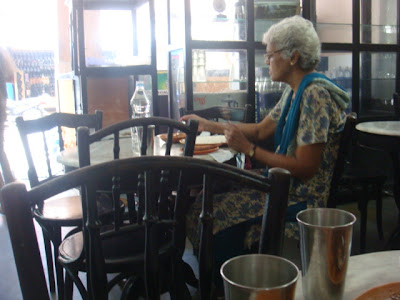 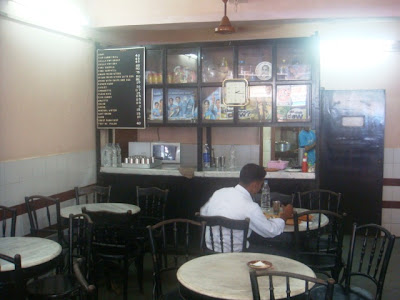 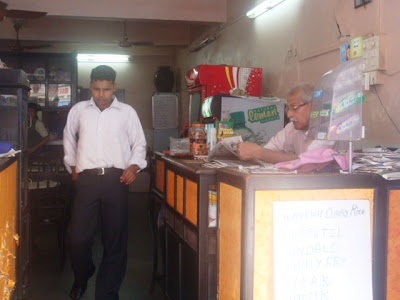 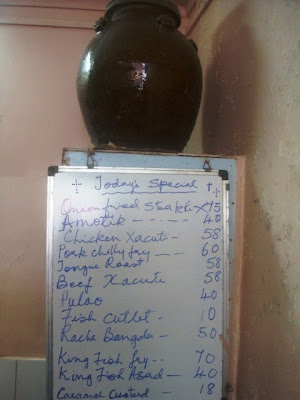 I left the ordering to MC. A woman who clearly knows her meat. They had run out of some classics such as Goan sausage or Chorize. There are no leftovers in grandma's kitchen after all. 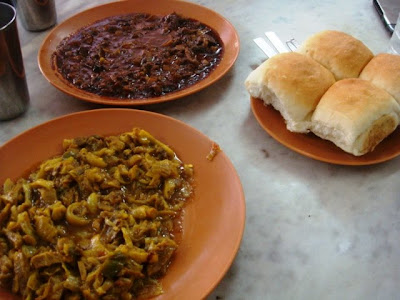 We started with beef cutlet. Thin slices of minced beef under a crisp bread crumb coating. Crunchy, meat filled. Comfort food. MC said that her Christian classmates in school at Goa would often get these for lunch. 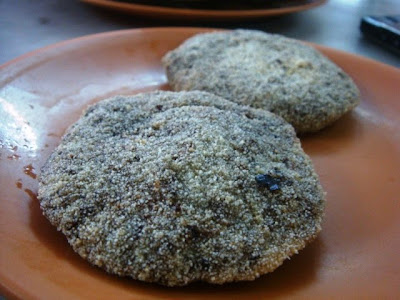 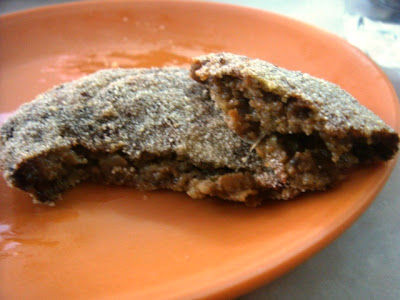 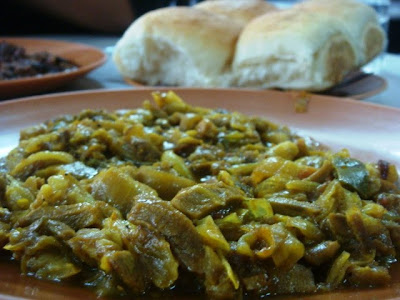 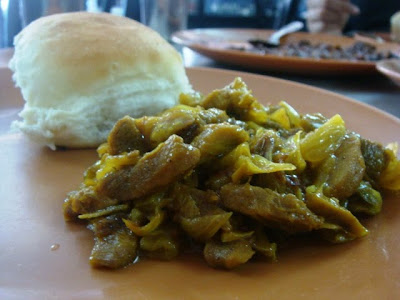 Pork sorpatel followed. My favoured choice over vindaloos in life. I took a bite of the sorpatel. It had a very deep taste of Garam Masala. A few more bites, mopped up with pao (local bread), and I discovered the secret behind the baritone taste. They had used whole garam masala here. Whole black pepper. Whole clove. Something I had never come across in sorpatel before. The sorpatel was nice. The pork chilly fry was even better. But then there is no disgrace in coming second to such a piece of art. 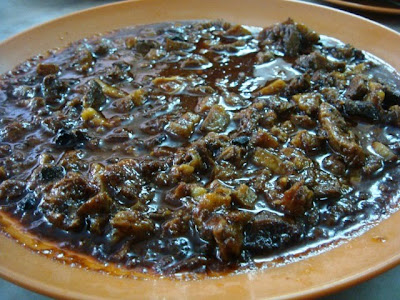 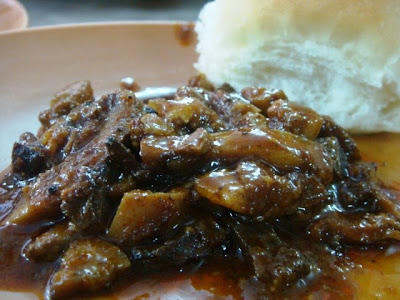 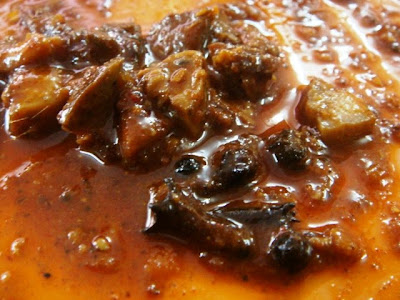 I packed both the cutlet and pork chili fry for dinner. Kainaz loved them too. I took vindaloo instead of sorpatel for her. K is a vindaloo lover. Well, let me tell you that this is the best vindaloo that I have ever tasted. The consistency of the gravy was perfect. Thin but not oily. It was spiced just right and didn't overpower you with sourness or excessive masala. Needed a pinch of salt. The quality of the pork was stellar. Fit for an emperor. You felt privileged to bite into this soft juicy pliant heaven. Wonderfully encased in a layer of very soft and maternal fat. I unconditionally liked it. Probably the first time that I had enjoyed a vindaloo so much. The first time that I preferred vindaloo over sorpatel. 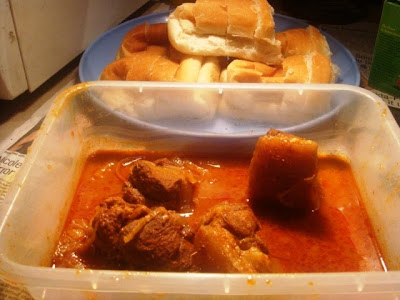 In a way we had two meals for two people each time for about Rs 300 or 6 USD. And, as MumbaiCentral pointed out, the best thing about such places is that they have just one vegetarian dish. 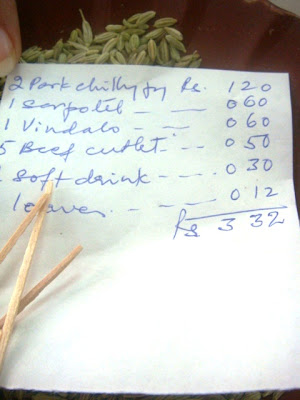 Sassy Fork said…
Thanks! Hadn't heard about this gem! Will definitely go there!
Bangdu must be mighty thrilled too considering how much he loves Goan food!
17 September 2010 at 08:26

Scarlett said…
That's a lot of oink oink right there ;-)

Both the pork chilly fry & sorpatel look delicious. 'A' is a pork & beef lover too...I wish there was a good goan restaurant in this city that I could take him to.
17 September 2010 at 12:03

Kalyan Karmakar said…
The Bride, that I need to have, where I can catch her?

@Sassy Fork, I am discovering lot of new places here. He is at the wrong end of town

@Scarlett; you guys come over for a weekend, I can provide bed and breakfast at candies
17 September 2010 at 15:28