Back Home at Fort... Muslim Keralite fare at Rahmaniya 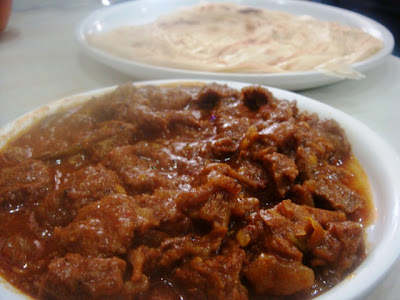 So I was back at Fort yesterday after ten days at Kolkata and Gurgaon. It had been too long. K texted me at lunch time, "so where are you having lunch on your first day back?"
Yes, it couldn't be just any place. It had to be special. Representing the very best of my Fort outings. I set off on a hunt. And did well.
I remembered the directions that Chandra,  the owner of Apoorva, gave me for the Keralite beef and paratha place at Fort. I had heard so much about the Keralite beef and parathas at Sunny's, Chembur. I didn't want to miss the opportunity of trying something similar. So I went past the lane in between Cafe Ideal Corner and the workmanlike 'saloon'. Down the narrow lane which eventually led to Forbes Building on the main road. There it was as Mr Apoorva promised. First his restaurant, Fountain Plaza. A humble 'lunch home' as he described it. With great mutton masala. Next to it was Rahmaniya. Muslim name. South Indian lettering on the board. As Chandra said, I would know it when I saw it.
Rahmaniya was what you could call a hole in the wall. Size of a biggish garage. Non air conditioned of course. People were queueing in to get in. The sort of place where four strangers share a table. Where  the food is fresh, has a certain home-like quality. The sort of place I have begun to love. Where I  have spent many sweaty and memorable meals. Happily chatting away with my fellow table mates and often the owner.
There was no beef on the menu. On asking I was told that they served it. A fact not publicised possibly keeping Hindu sensitivities in mind. Ironically similar to the Chinese restaurants at KL which don't mention pork on their menu. In their case to not offend the Muslims.
I had to have the beef masala and parathas and I ordered them. The parathas were made of flour. Gossamer thin. Not chewy at all. Gave in cheerfully too each bite. One of the best parathas that I have ever had.
The beef, succulent, tender. The curry seemed like it was cooked in someones home. The spices perfect. No colour or additives. You almost felt like like lying down in a bed of beef masala pulling a paratha on yourself as a sheet. That's how comforting and heart quenching the dish was. And we grew up thinking that all South Indians were 'Madrasis' who ate idli dosa. That's the danger of stereotypes. Thank God that I am enlightened now. It's never too late to stop being a frog in the well.
I begun talking with the gentleman sitting opposite me, Jamal. A second generation Gujarati. Born and brought up in Mumbai. Jamal pointed out that the beef masala wasn't really Keralite. He was eating mutton masala himself and said that it was 'standard'. According to him the parathas were Keralite. As, his smile grew bigger, were the fish curry and biriyani. Jamal said that Keralite biriyani was different from 'Bombay' 'biriyani'. It was apparently less oily and had less masala and gravy. My Bengali ears perked up and I ordered a chicken biriyani even though I was full. Jamal warned me that the portion would be large.
Was it the elusive dry and subtle Bengali biriyani? Well I removed the mound of rice to see chicken in a thickish masala. Thick by Bengali standards. The chicken looked fried in a thin red batter. They had given me a leg piece as per my request. Delightfully juicy. Biting into it made me fell like a Nomad having his first sip of water in a fountain in an Oasis. The chicken obligingly peeled off with each bite. The spice mix was dominated by deep fried onion which gave a seductive sweet caramelised touch to it. The rice wasn't infused with gravy. It was short and stubby. Not long grained Basmati. But extremely fragrant and erudite. The biriyani was served on a small dish which was placed on a larger saucer. I apparently ate it the wrong way. My new neighbour at the table expertly put the small plate on the side of the table and took rice and chicken out separately onto the big plate.
I continued my vain attempts to try to teach photography to the waiters in small restaurants at Fort. Another gentleman who joined our table and was benignly eating a chicken masala with paratha offered to take my photograph after he saw the disaster being clicked by our smiling waiter.
You have to pay at the till here. A princely 120 Rs (3 USD) for a beef masala, two parathas, one chicken biriyani and a small Coke. For the record, I didn't eat everything but wanted to try out multiple dishes.
I spoke to the owner, Mohammed, a man of few words on the way out. After persistent questioning I found out that the restaurant was started in 1965 by his father when Mohd was knee high according to his hand gestures. Given the home food-like honest taste and quality....I am sure Rahmniya will be thriving even when Mohammed's grandsons  appear on the scene.
I stepped out taking in the buzz. The colours of the busy street. The sandwich-wallah . Tha'swhen I spotted a shop selling green capsicum  pakoras. And then another story begun. More on that next time. 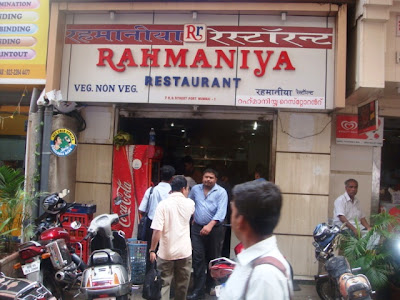 Farriemist said…
The Keralite paratha is my favorite. There are lots of Malayalee restaurants and hole in the wall cafeterias that make these yum parathas out here in Dubai. And they go so well with everything. Be it a stew or a curry and even egg. Omelette-Paratha is one of the best breakfasts ever. Maybe a kebab roll. Or just by itself with a cup of tea. We do get the frozen ones in supermarkets and it is yum but it comes out more crispy than soft and flaky. I crave these when I come to Bombay so now I know where to get them close to home. :)
22 October 2010 at 03:55

Sassy Fork said…
The Knife looks blissfully happy after having discovered another gem.
Is this the famous Moplah Biryani from Kerala...have been wanting to try it since ages.
22 October 2010 at 07:59

@Sassy Fork. Indeed. Need to go back and check on Mopla

@Farrie, I have had frozen Malabar parathas from Sumeru. The ones here were something else
22 October 2010 at 11:41

Mumbai Central said…
This is right below my office :) I think the biriyani at Fountain Plaza is better though. But that's just my opinion.
24 October 2010 at 12:15

Miri said…
I miss the Parotta - the frozen ones are not a patch on the fresh flaky ones...you are definitely broadening horizons :) And its awesome that you take the time to coax out stories from these people
24 October 2010 at 20:45

@Miri, chatting with strangers is new to me. Comes naturally now at these small places
25 October 2010 at 01:22

@Miri, chatting with strangers is new to me. Comes naturally now at these small places
25 October 2010 at 01:22

Anonymous said…
THANK YOU The Knife FOR THE GOOD WORDS. ITS REALLY HUMBLING EXPERIENCE AND MOTIVATION TO STRIVE TO EXCEL.
MOHAMMED.
7 March 2013 at 22:17

Kalyan Karmakar said…
Thank you for writing in Mohammed Bhai. Just today I was at Fort at and was rememering the lovely times I have had there and at your restaurant. The pleasure is mine...Kalyan
7 March 2013 at 22:29