on October 01, 2010
I have rarely been as embarrassed about a blog post as I was today. That too about a post I had just written. Then there was  the knowledge of having spoilt the lunches of seven good souls. And, worst of all, my own. It weighed heavily on my conscience.

We shut shop early today at work. The day of the Babri Masjid Ram Janambhoomi verdict. Doomsday was predicted by strident TV news channel anchors. An Oil Of Olay moment for me as it took me back to the heady days of '92. I had just joined Presidency College then. The first crushes had begun to crystallise. And boom, we were quarantined at home for a month with riots going in parts of Calcutta back then.

We decided to have lunch  today before we set home from work. I couldn't walk too much thanks to a strained knee ligament. It was hot. An air conditioned place would be good. I suggested Banyan Tree Cafe & Bakery. This was just across the road in the lane opposite Citibank at Fort. I went there a couple of days back. Summed it up as a great place to sit with competent food. Today it remained a nice place to sit. The food, a crime against humanity.

Sudeshna and I gave the Berryblast drink a try. We both winced with our first sip. It was watery and sour. Immediately told the waiter who offered to change it. I decided to have the more expensive New Zealander that I had the other day. They got a Berry Blast again and promised that they had fixed it. Left with a sour taste in my mouth, I refused. Turned out the New Zealander today was a lot thinner and less enticing than the other day. Meanwhile Sudeshna's Berry Blast begun to look like a test tube in a lab. The water and the yogurt mix separated perfectly. Fractional distillation eh? I could never get it right in the lab. The guys at Banyan Tree did today. 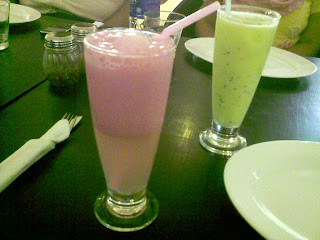 Chinmai wanted to order a mezze platter. Meher warned him against it. I suggested that he go ahead as the platter was nice the other day. Meher was right. The hummus which was nice and firm the day before was spineless and watery today. The muttabal was stiff, unevenly defrosted, had onion paste but no aubergines. I pointed it out to the waiter. He ran and got a proper muttabal. It had aubergine this time. And was ice cold. Well, at least they have a powerful fridge. 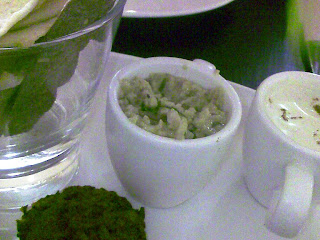 I complained to the waiter. He took it away, ran and came back in a few seconds. Turns out that they have a powerful microwave too. The mutabbal now was so hot that there was steam coming out of it. A bit like a cremation pyre. Needless to mention, mezzes are supposed to be served at room temperature. They are not supposed to supposed to simulate the icy frost of a Diva scorned. Or the tempestuous rage of a Prom Queen dumped. 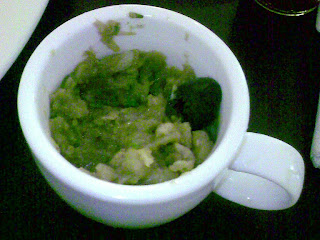 I suggested Pitzaa to Chinmai. Thought we could share it. The menu said tomato sauce base, mascarapone, cream, feta. It evoked memories of the fantastic Da Vinci pizza that I had at the Ristorante Pizzeria, Montreux and Zurich. A work of art. The individual pieces of emmenthal, mozaralla and mascarapone had come together with pepperoni, cherry tomatoes and rocket leaves to create a Renaissance work of art there.

Imagine a cream cracker biscuit doused in a pinkish liquid of unknown parentage with disintegrated pieces of something labelled as 'tuna' and you will get an idea what they served at Banyan Tree. Reminiscent of the Mosque which was broken down eighteen years back. I could almost hear a sadistic Chef yell "ek aur dhaka" (one more blow) as he demolished our meal. Interestingly, the pizza didn't age well. The last slices disintegrated faster than the Roman Empire. 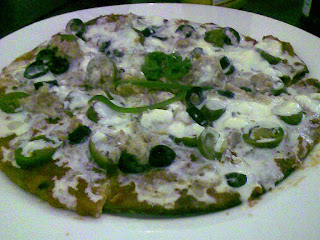 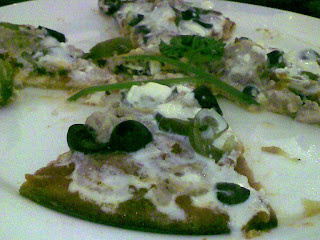 My sins didn't end there. I suggested the crostini to Ira and Neha. How wrong could you get with 'basil, cheddar, served on hot baguettes with an olive and mushroom tapenade'? Well as wrong as cold pieces of regular bread, toppings where you could taste neither the cheese nor a herb as idiosyncratic as basil. And a mushroom dip which was again ice cold and excruciatingly sour. 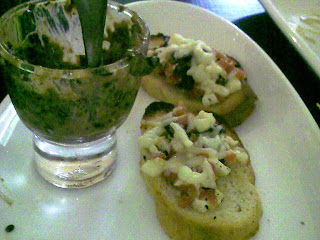 A restaurant I had recommended. Dishes I chose. An unmitigated disaster. Unlike Kalmadi, I take absolute responsibility for what happened. Felt really bad about the 320 Rs (6 USD) that each of us shelled out.

The nightmare didn't end there. Vir Sanghvi had written about the packaged water scam in his book, 'Rude Food'. The guys at Banyan Tree delivered this to perfection. The only thing they got right today.

They didn't serve water. They had a couple of Aquafina bottles on the table. We poured them into the glasses kept there. When the bill came, I saw that had charged Rs 40, a hundred per cent mark up, for these. They hadn't even informed us that they would charge for these. I challenged the waiter. I said that we had assumed that there was no charge for these. Regular, non criminal-minded places ask you if you want regular or mineral water and charge you only if you ask for the latter. The waiter could only dumbly mouth the words 'there is a charge for it'. I pointed out that there was nothing written on the bottles. Nor was this mentioned in the menu. And, as I stepped out and checked, the bill of fare painted on the wall outside didn't mention a charge for water. Well, Banyan Tree was obviously a place with no standards or scruples.

Thankfully the country has remained sane today after the court verdict. Perhaps the disaster and bloodbath at Banyan Tree Cafe & Bakery was what Goswami, Sardesai and Dutt were getting antsy about.
coffee shops Conti Fort Mumbai lows South Mumbai Woes

Unknown said…
I was wondering abt this.. your FB status and the previous post did not match. Well if a place every got finely chopped.. OMG.
1 October 2010 at 10:31

Scarlett said…
I'm not surprised at all. Indian restaurants are completely capable of such volte face. You should've refused to pay for the water.
19 October 2010 at 14:16

Nitheesh said…
Hey, nice site you have here! Keep up the excellent work!