Brother of the Groom

on October 10, 2010
Overpacked. Almost late for the flight, beating the closing gate... 12 neatly packed brownies from Theobromas, forgotten in the fridge...I was ready to leave for Calcutta

Catcher in the rye

The Bong blogosphere is rife with nostalgic posts on Durga puja. Shiuli, Dhak, Ashtaomi, Mahalaya are words that are all over the posts. I landed in Calcutta yesterday for my brother's wedding. Having learnt from last time, I booked a an airconditioned Mega Cab from Mumbai itself. Sheer pleasure, the sweaty traffucked drives home a distant memory. Though we  debated about whether they really need to take the Rs 150 plus detour down Rajarhat.

I saw the first Puja Pandal with a Bengali poster as I drove down the airort. Still takes a bit of time to realise I am in Cal and that Bengali is not out of place here. I must say that I didn't feel the same current of joy cumnostalgia that I used to feel earlier while returning to Cal during the Pujos . Which is when I realised that I have been away from Cal for more than ten years. And Cal was sandwiched between Canterbury, Liverpool, UK and Mumbai after all. Ten years plus spent in culture neutral Bandra. Married into a non Bengali family. Last couple of Pujas spent holidaying abroad. The thrill of Puja cooling off a bit in the process.

But I did find my way back home like a homing pigeon each time I drove off in my brother's car into the winding bylanes of the deep South.

"You get better coffee at Calcutta"

Who'll argue with cappuccino addict Mrs Knife on this? The cappuccinos at the Coffee Day's of Golf Green and Bunty were robust, steaming. Golf Green CCD was our first stop on the way home. They made a couple of excellent coffees for us though there was a problem with their machine. And Soumen, the smiling man at the counter, remembered my last visit there with Dadu, Didu and my mom. Right down to which table we sat at, how many pictures we took and what we ordered and what Dadu liked.

Guess one shouldn't think too much about things. You'll know when you are home. 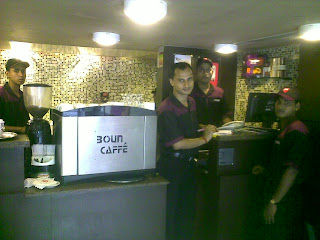 We met my brother and cosuin who were shopping all day at South City trying to get a fix on his wedding and reception attires. He is having a fairly informal, non Punjabi, new age wedding. K and I took charge and soon closed the call on a Sanjay Leela B like kurta pyjama and red stole for the wedding and a blazer, ZOD! shirt and trouser for his reception for his friends. The rational much married man in me pointed out that the blazer would come of use later. 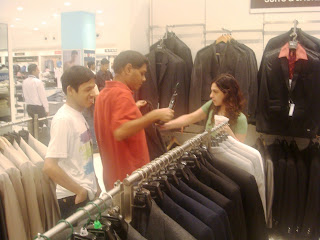 In between I tried to get the conviction to wear a dhuti. My dad was adept in wearing them including when abroad and I would wear these in my sub four feet days with him. We found a 'pre-tied' dhuti. What next? Pre digested mutton rolls?

Anyway, it worked for me. Though the diaphanous texture was straight out of a Bollywood rain dance. 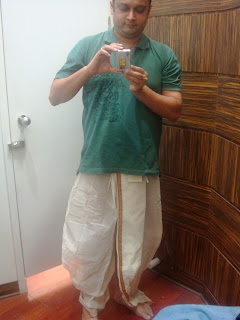 We took the tired to be groom (in red) and his loyal partner in shopping to dinner at Benjarong. The prawn Satays were cooked by Anna just the way the King would like it. The green curry ethereal. Flavoured with Thai Brinjals and basil rather than the carrot and broccoli nonsense of Mumbai. The spicy soft noodles livened up things. The duck in the red curry inedible and sent back by us. 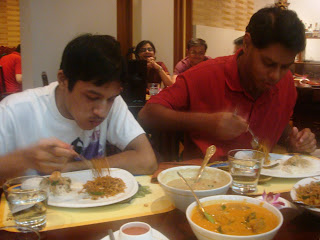 Mother of the Groom 2

Well the marriage registration,s in a while so forgive the fevered typing. No point stressing my mother even more. K has kept her occupied while I write. The weddings in a few hours and we are still trying to figure out where my bother will leave from as he doesn't want to get into his bridal attire at home!

You can take The Knife out of Mumbai but ...

By the way guess who is the new Mid Day mate in the the Sunday Mid Day at Mumbai today? There was an article on food blogging there. Can't wait to get back and get hold of a copy. Thanks for sharing this Sassy Fork. Was great to share space with Simon Majumdar & learn about Mallika Basu here. 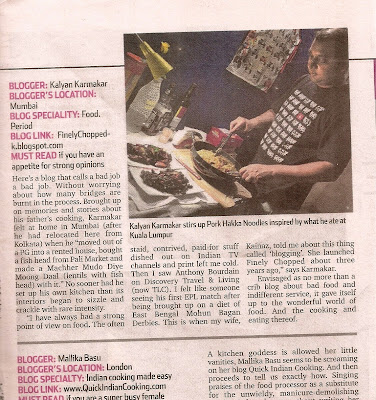 Sayantani Mahapatra Mudi said…
wow you are having a double festive atmosphere I guess or what we call a double dhamaka...enjiy brother's wedding...nothing matches the joy and excitement that a wedding in family gives.
10 October 2010 at 22:23

Rhea said…
Congratulations to the family for the wedding! I'll be in the city in less than two months myself, yayyy!
PS: I feel disconnected from Pujo too, n it's painful. :-(
10 October 2010 at 23:00

Rusha said…
Hi Mr.karmakar...
I jst wanted to say dat it's so amazing to know how much of a food lover r u n d best part is dat u can express d same wid so much pride...am a regular reader of ur blogs n must say dat dey r superbly written n ofcourse d pics widout dem all dis wud have nt meant d same...keep writing in d same way n filling up our quest for reading and eating...wish u all d best....
26 October 2010 at 18:57

Kalyan Karmakar said…
Thanks Rusha, Rhea, Miri, Sayantani and sorry for the late reply. There was a lot happening then but touched by your wishes
27 October 2010 at 01:14