Finely Chopped turns three ... The depths of Howrah and back home at Yellow Tree

on October 08, 2010
Finely Chopped turned three on 7th October
Gosh can't believe it's been three years since the first post. After Kainaz managed to figure out what this 'blog' thingie was and opened Finely Chopped for me. It was meant to be a crib blog. I started off with  rants against Kingfisher's food, JATC and then on Spaghetti Kitchen. Somewhere along the line the warm and fuzzy world of food took over. The Knife was sheathed. Soon Finely Chopped became an 'open recipe book'. A way of life. I wrote eighteen posts in the first three months. Now I feel uneasy if I go to bed without writing a post.

And what a birthday it's been. A very sweet mail from veteran blogger, and soon to be book writer, Idea- Smithy, the previous day which started:

Hi Kalyan,
"How are you?
I was reading your back posts on my feed-reader when I realised I’d been engrossed reading about something I never thought I’d enjoy – cooking! I’ve said this before and I’ll say it again. You really have a flair for food writing if you can get a non-foodie interested!..."
And then I woke up this morning to read the post, "When The Knife Cooks" by Jyotika on her evening at our place. No one has made my food look as wonderful as she did. I couldn't stop beaming after I read the post. A nice birthday present even if by chance. Both folks I knew thanks to the blog.

These were precursors to the mails and texts that followed from others...most of whom I knew through the blog. The amazing set of friends that I made in these three years. My 'Finely Chopped Knights'.
I was at a loose end for lunch after a busy morning at work and took myself to the New Bengal Mess which became Howrah and now hides behind Zaffran. The food was utter crap to put it politely. And my stomach didn't agree with it. Am still cramping. But then as K said, this is why I had started Finely Chopped. So watch out Howrah, I am coming. 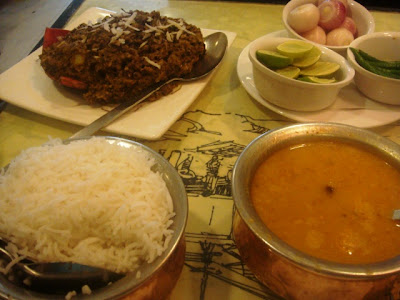 Soon I got talking with a group of three who were sitting beside me. They worked in a Calcutta based ad agency. Two of them were in Mumbai for six months. The gentleman missed home food and ordered posto bora and begun bhaaja and pabda with sheer glee. Turned out their office was next to my temporary work digs at Fort. We chatted about where to buy fish... about the famous Dulal of City Centre and the aggravation of ending up with a whole rui for a family of two. And we sung praises of the biriyani of Hangla at Bandra in chorus. 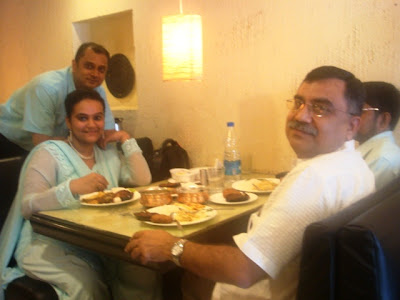 Three years back I wouldn't have chatted with strangers at restaurants. Nor would I have met the number of wonderful folks that I have through the blog. Many of whom have become friends in the real world. Yes, it has been quite a ride.
Came back to work to see an urgent email. A first time blogger had opened a blog, 'somehow' written a post and was now trying to figure out how to access her own blog. So I was giving advice to someone who just written her first ever post, three years from the day I wrote my first post.
And a food court featured prominently in this post! We had an interesting phone call where we discussed the merits of using a pen name versus one's real name, the difference between a 'url' and a blog name and the 'about me' section... and on how to read comments which people had posted.
Some of the Knights met up at Global Fusion at night and asked me to join in. I had to decline the invite thanks to my post Howrah angst.
K and I went to our home away from home, Yellow Tree. A calming apple ice tea. A thickish nourishing mushroom and Parma ham soup to calm my sore tummy. A nice stiff hummus and pita with extra pita on the house. A sublime crisp Vietnamese Basa cooked in an ethereal sun dried tomato based sauce served on a platter of potato baked with cheese and red pepper. Poetic. And as our smiling friend with the huge moustache explained, the frozen 'Vietnamese' basa imported daily would hopefully be free from the recent oil spill near Mumbai. I went for a penne arrabiata keeping my battered food pipes in mind. I am not a big fan of arrabiata but the one at Yellow Tree was not overtly sour and had enough character to keep one interested. 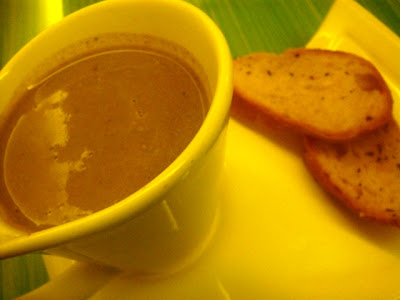 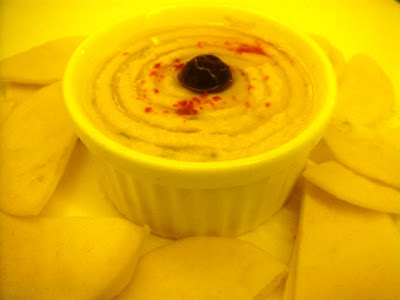 And now there is finally something to do with blogging which I can put on a time sheet at work. I normally keep my blog and work life separate but this I am really kicked about. I have been invited to conduct a workshop at Bangkok on how to get consumer insights from web 2.0. The meat for this case came from the world of food blogging and its 'Blogerazzi'. Now all I need to do is to figure out how to convert a twenty minute paper into a three hour workshop! BTW how do you like the term 'blogerazzi'?
Here's to year four. 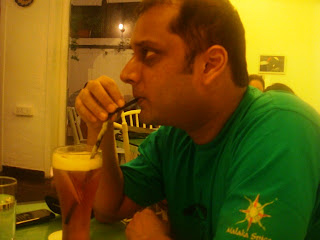 Unknown said…
Lovely! And a very Happy Birthday to FC. Food connects people. I am glad we connected somewhere...
8 October 2010 at 03:34

Anonymous said…
Happy Birthday FC. You brighten up my life! Eat your veggies and keep writing!

S said…
wow...congratulations! here's wishing you and the blog a happy fourth, with fond wishes for many many more!
8 October 2010 at 13:04

Unknown said…
People asked me if I had a crush on you after reading the post- I said its a blog crush. (And Mrs. K would kick my ass really hard). Besides Im still aiming for Mr you know who. Need help on that front!!!
10 October 2010 at 17:50

Scarlett said…
Happy Belated Birthday to Finely Chopped. I'm so glad you started this blog, for I got to know you this way. And like Ideasmithy, you got me hooked onto something I never thought would interest me - food, cooking, recipes. I got interested in food only b/c of you Kalyan, and I enjoy it so much now :)

Kalyan Karmakar said…
@Curry Spice...blankets and trees and you will reach there :)

jade said…
I high appreciate this post. It’s hard to find the good from the bad sometimes, but I think you’ve nailed it! would you mind updating your blog with more information?
Food Trucks In Los Angeles