"He who loves the baker gets hot noodles". Ming's Palace, Colaba 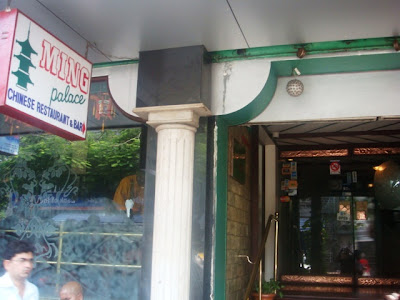 I was on Facebook the other day when I saw Gia's update. It went "Nothing spells comfort like the aromas from a simple pound cake spreading through the house. Vanilla and butter tantalises, while a golden crust beautifully beckons from inside the oven. It must be hot in heaven tonight, a 180 degrees hot!". And then I saw the pictures she put up.  I could almost smell the butter wafting out of my comp screen. I lusted shamelessly after the cake till Gia offered to give me one of the two that she had baked.


We met outside my office the next day. I got into car with the cake, unwrapped a bit of the silver foil and was immediately swept off my feet by the sensuous aromas of vanilla and butter. Now the thing is, Gia not only came from Wadala to gift me the cake but even took me to her favourite Chinese Restaurant for lunch. How lucky can a guy get?


Ming's Palace is this restaurant at Colaba Causeway. It is apparently sixteen years old and is owned by the Ismaels of Meena Bazar. It is opposite Electric House ahead of Leopolds and Food Inn. I had often passed it by but never gone in before. We went in and sat by the window and took in the joys of Colaba Causeway passing us by. 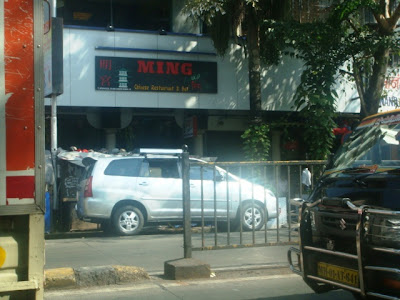 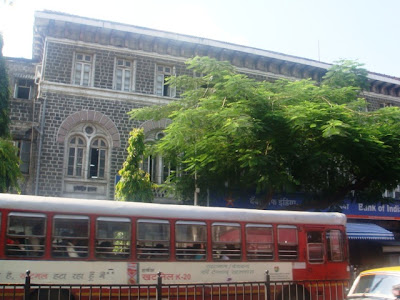 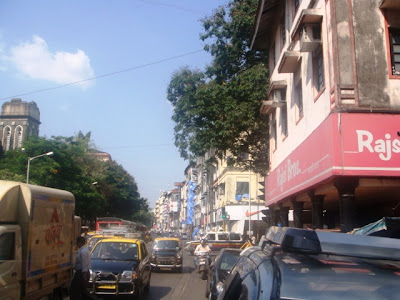 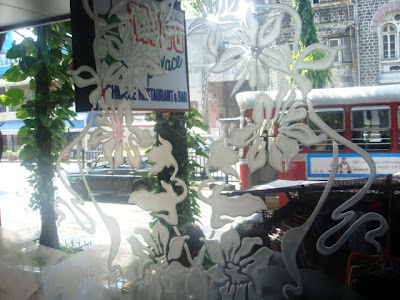 The decor at Ming's Palace  is very eighties Chinese. False golden ceilings, lots of reds, dragons, faux pagoda pillars... it had Enter The Dragon and Fists of Fury written all over. The service was competent and the managers and maitre d knew their stuff. The waiters enthusiastic even if they occasionally bumped into each other. 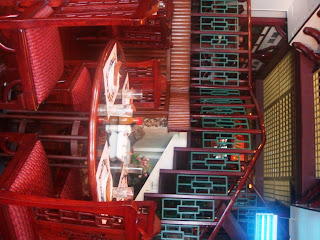 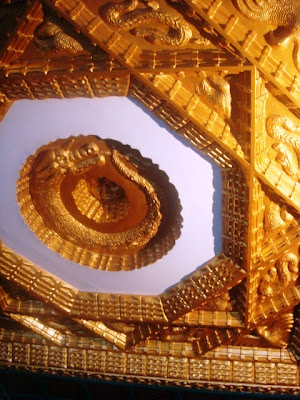 I asked the maitre d for something "uniquely Chinese". Gia told me not to bother as this was a hard core Indian Chinese place.


Gia ordered an old favourite of hers. Beef chili. She very clearly specified that it should be from an under cut. She told the waiter that she could  recognise a good tenderloin and threatened to send it back if it wasn't. Her stern words worked. What we got was a most delectable plate of beef chilly which was light years ahead of the beef chili of Leopolds. I realised that beef could actually be succulent and juicy. 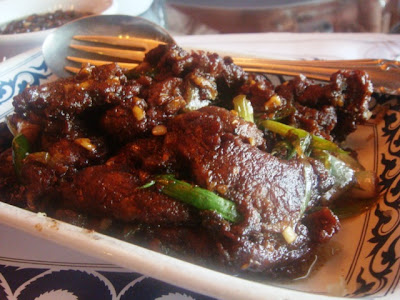 "Ask for under cut'". A lesson learnt. But then this is a lady who knows her meats. She had after all cooked up a storm for us with beef and pork in her magical kitchen sometime back. 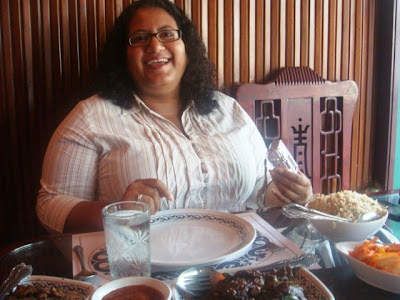 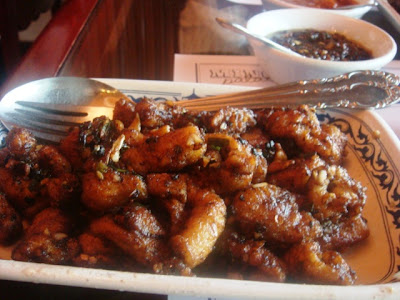 On asking we found out that you can order half portions of rice and noodles. The mixed fried rice was well flavoured and not the standard white and lifeless rice in widow's garbs served in many local restaurants. 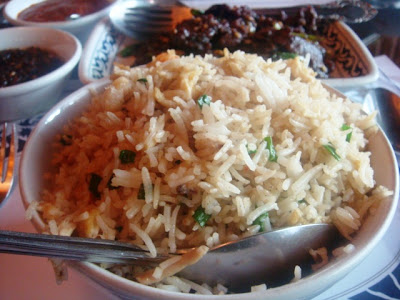 My first reaction to the mixed Hakka Noodles was, "it looks almost as I have made it". At the risk of giving in to the sins of hubris I must say that I make one of the best Hakka Noodles at Mumbai. The Hakka at Ming's Palace were colourful, zestful and bursting with passion. 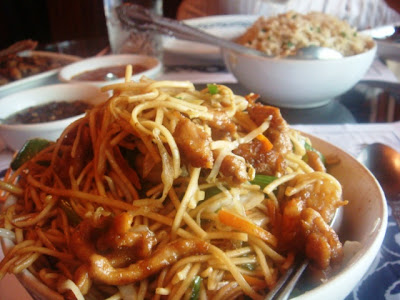 The food at Ming's was deep fried and spicy, as Indian as Chinese can get. There were a couple of dips - chili ginger and regular red chili which were volcanic. I looked as if I had dived into one of the Sichuan Hot Pots of Chengdu. Sweating and smiling. In fact the last time I perspired as much at a food place was at Puncham Puris. Both lunches were followed by strident burps late into the night. 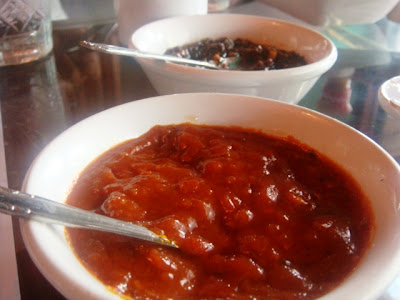 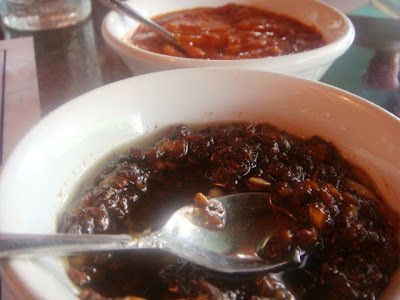 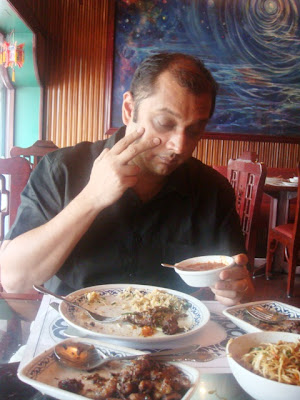 Gia and I parted ways till we met the next night for a Master Chef Pressure Test dinner at our house on Saturday. More on the later. 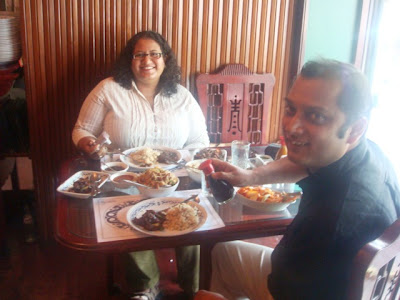 This fable had a happy ending. I came home late in the evening. Took out a juice before going to the gym. Cut a slice of the cake. "Thick" as she had instructed me. It was just as I had imagined. Just the right sweetness. The perfect hint of vanilla. The definition of comfort food. With all the love which comes with it. With "Baking Goddess' as K calls her written all over it. 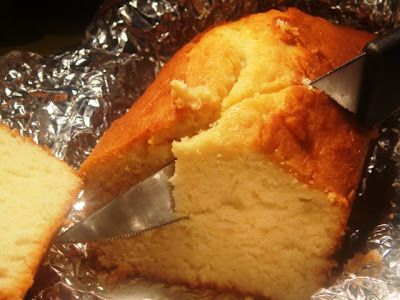 PS She is going to hate me for this but I must mention Gia takes orders for her sinful cakes ... she is now gearing up to make her Christmas cakes. A three month long process
Colaba Mon Ami Oriental People

sassyfork@gmail.com said…
This comment has been removed by a blog administrator.
4 October 2010 at 08:02

sassyfork@gmail.com said…
This comment has been removed by a blog administrator.
4 October 2010 at 08:07

Sassy Fork said…
Wonderful seeing Gia finally!
Was amused to see the newspaper over which you poured the chilli chicken say "lose weight now" :))
4 October 2010 at 15:05

Marie said…
Hi. Lovely beef chili. must try it. Ming's is bang next to my office.
Would love to have Gia's contact email etc. to place an order for Xmas cake and the lovely vanilla butter cake.

@Marie, I have pasted Gia's id gia(dot)fernandes(at)gmail.com She is at her wickedest when given a free hand with chocolates and liqueurs :) Enjoy Ming's and don't forget to ask for the under cut
5 October 2010 at 20:46

Anonymous said…
K&K - Your wish is my command. Next up, choco walnut loaf!