on October 12, 2010
Well I am sure that Bengali wedding have their share of rituals. But dancing doesn't feature in them unlike in the weddings of the North of India. The defining cinematic image of a wedding for many non resident or Probashi Bengalis would still be Soumitra walking down alone through dusty village roads in a groom's attire to get married in Satyajit Ray's 'Apur Sansar'. A black and white world far removed from the opulent colourful Punjabi/ Gujarati NRI song and dance numbers of Karan Johar films. Despite my limited knowledge of rituals I can still say that Bengali weddings as a genre would not qualify as 'Big Fat' ones.

I am in Calcutta for my kid brother's wedding. Thankfully the couple decided to do away with the religious paraphernalia in this wedding. The focus was on friends, family, food. The wedding solemnised by the legal registrar. Planned and put together in less than a month's time. Celebrating a love affair which was more than a decade old. 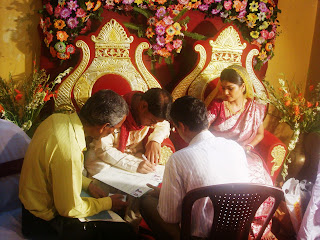 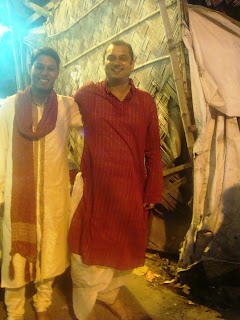 The basic framework of a Bengali Hindu wedding goes like this. Day one is the wedding which is hosted by the bride's side of the family. Day two is where the bride and groom, who stayed overnight at the bride's home, come over to the groom's house. The bride has now come to our house and I can fully empathise with the protective brother in law of black and white Bengali classics.  Day three is where the groom hosts a reception also known as Bou Bhaat.

Bengali wedding dinners were sit down affairs when I came to India in the early 80s. Members of the family would serve the food on banana leaves to the guests. I remember being given the honour of serving pieces of lemon at my autn's wedding when I was around 7 years old. Since then banana leaves have been replaced by porcelain. Sit downs by buffets. The men in the family by caterers who mange the show. And bhaapa eelish by fish butter fry as folks seek variety and modernity. Despite the caterers and porcelain, plastic chairs in place of cardboard ones, I was glad to see a traditional menu arranged for my brother's wedding. So there was a sit down dinner with caterers turning the tables as quickly as they could. The menu card which gave the bill of fare so that one knew what to focus on. The groom's name mis-spelt. Luckily we were too hungry for anyone to walk out over this. Plus I would have tripped over my dhuti. Here's a secret. This was a 'ready-made' dhuti and operated on the principle of pyjama draw strings. 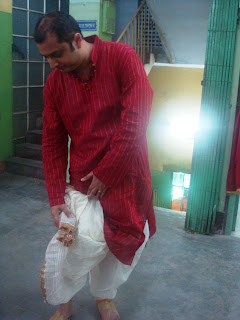 Strips of paper were adroitly laid out on the tables to cover the evidence of the previous diners. Don't expect knives and forks here. My recent subaltern eats at Fort have taught me to eat with my hands and take photos with the help of a bundle of tissues. People sat down in 'batches'. Salt and lime was served. Alas, not by a fat kid in half pants and a Brit accent. 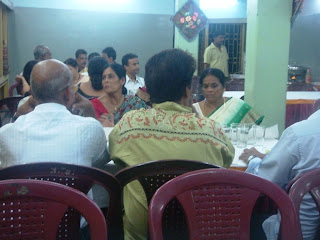 Course one, luchi chholar daal. The first Indian dishes that I really loved. Cooked everyday for me by Didu during my first trip to India when I was five. They used to get it specially for me in weddings which didn't serve luchi & c daal in those days. Never tasted as good as Didu's. 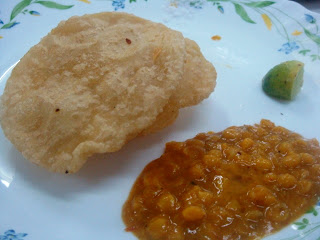 The vegetarian stuff disposed off, fish followed. Fish paturi or fish steamed and grilled in a mustard marinade wrapped in a banana leaf. I was glad to see that there was none of that chili fish nonsense which invaded Bengali wedding feast meals when I left Calcutta in the end 90s. 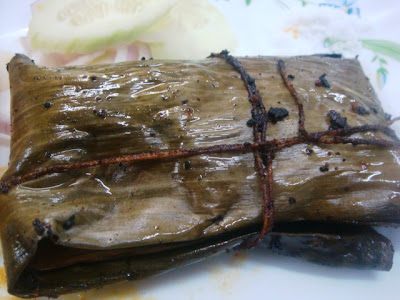 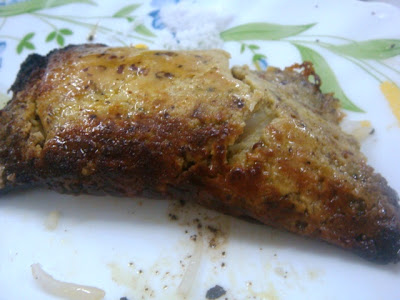 Then it was the turn of the meat. Here it was mutton rogan josh. No Kashmiri would recognise this but the mutton was very tender and succulent and served in an indulgent near-creamy gravy. I remembered the mutton later when my mom sighed in relief and said, "great that everything went off smoothly". The mutton served with an accompanying pulao rice was smoothness personified. The joy of sucking out the marrow, primordial. 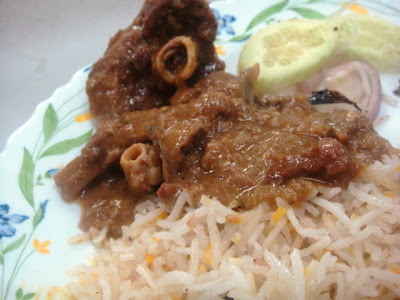 'Vegetables', fish and meat are followed by a change of palate before the sweets came on. This is done through chaatni and papad. Chaatni as against 'chutney' is similar to a boiled fruit conserve with syrup. A poetic mix of sweet and sour. The most popular form is made with tomatoes. You could also have chutney made with pineapple or raw mangoes or as in this case, mango preserves or aam shokto. Chaatnis are difficult to find outside the Bengal and the first taste, licked off my finger brought back a rush of happy memories. I used to take chaatni in a bhaar or earthen glass and dip into it happily after community lunches at the Durga Puja in our building. Tired and happy after serving others out of buckets of food. 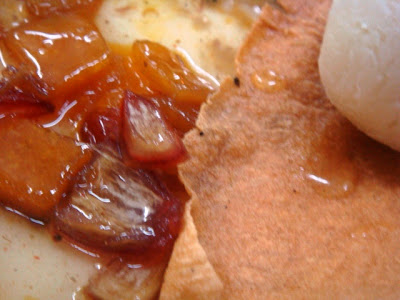 Sweets came on next, roshogolla, shondesh, kulfi instead of mishti doi... digested with the help of paan for those so inclined. 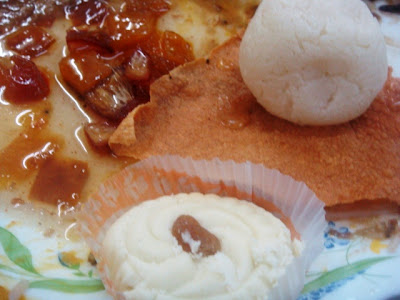 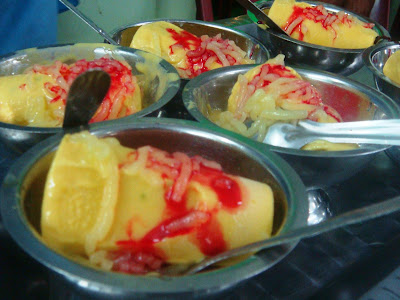 Soon the guests leave, tears are shed, laughter fades, adrenalin cools down, new lives begin .... at the end what remains are the memories of the food. 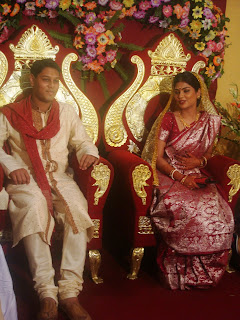 Pinku said…
ufffff....the food had me panting...nithing beats a sit down bangali biyee bhoj in kolkata...

the mutton and fish look so very tempting...

Best wishes to the couple yet again...hope the decade long affair translates into decades long martial bliss :)
12 October 2010 at 16:41