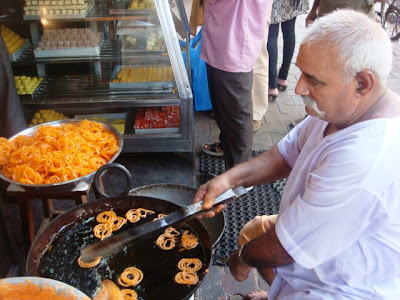 'Jilipir pyach' is a Bengali phrase. Translated literally it refers to the whorls of the Indian sweet jalebi, or jilipi in Bengali. Idiomatically it refers to devious people, who are not transparent or clean. They are evil, Machiavellian and scheming. Nothing is pure or simple about them. The sort of characters you would find in the loud, over the top, garish soaps on Indian television. As far away as possible from the gentleman I am going to write about.

There is a sweet shop in the lane behind Laxmi Building at Fort. A North Indian sweet shop. Vidya Dairy Farm. I pass it by everyday as I return to work from lunch. There is an elderly gentleman outside the shop making fresh, colourful jalebis in a pan of hot bubbling oil. You can't miss him. He catches your eye. Is this intentional? Like the old ladies who sit outside traditional Turkish restaurants making bread? Carefully stationed to catch the tourist's eye? Was he a billboard too? I don't think so. But he sure did fascinate me every time I passed by.

I was returning from lunch at Cafe Ideal Corner. I have said this before and will say it again. They make the best dhansak, the signature Parsi dish, in town. After ignoring the jalebis for many days, I gave in today. I stopped at the sweet shop and asked for a plate of jalebis. 50 g, about 6 to 7 jalebis for Rs 7 ( 0.2 USD). Looks weren't deceptive. The jalebis were as juicy, sensuous, tempting and rapturous as they looked. (In case my mom is reading this, I didn't finish the whole plate, had a green tea after that and worked out in the gym for about 45 minutes in the evening).

I went up to gentleman making the jalebis. He had a voice which was soft and demure for someone with such a swarthy white moustache.

"For how long have you been making jalebis?" I said


"Even I am not hundred." There was a twinkle in his eyes.

"But your moustache is so white."


"Nowadays even kids have white hair"

Well that did make me feel better about my greying side burns. Kids!

And so we begun talking. He said his name was 'Ustaad' or expert. Years of making jalebis had made him nameless I guess as he blended into the venerable stone walls of the buildings around him. The owner, sitting at the counter, told me that the shop has forty years old and started by the owner's father.

Ustaad said that he was making jalebis for more than thirty years. Twenty five of those in Vidya Dairy Farm where he worked now. He was from Allahabad. Home to India's biggest ever film hero, Amitabh Bachchan. But hold on. He asked me where I was from. Broke into a smile when I said Calcutta. He had studied in Sutanati School at a Burrabazar at Calcutta! He asked me where I lived in Calcutta. He nodded in recognition when I said 'Tollygunge'. I think he heard 'Ballygunge' though. Unlikely that he would have heard of Tollygunge in his times. We mulled about the differences in Bengali jilipi (pale yellow, chubby) versus the North Indian jalebi (orange, crisp). The other guys in the shop listening to us with wonder. On asking he said he preferred Calcutta as a city to Mumbai. Calcutta of a black and white era I guess. Of a time when Uttam Kumar wore a tuxedo and manned the desks of Chowringhee.

Ustaad didn't bat an eyelid as I took photographs. He went about his work and answered my questions while I clicked away. He would occasionally look straight into the camera. And why wouldn't he? He was the most photogenic person that I have ever come across. He was a star and he knew it. He had featured in the 'Times'. He made me go into the shop and see the laminated copy of the newspaper which featured the shop. Yes, there he was. Our ustaad smiling at us from the newspaper.

He asked me if I could give him printouts. I tried to explain the concepts of digital cameras and blogs to him. He smiled a toothy smile. Made you feel like a little child year old waiting to sit on your favourite grandpa's lap. And why not, after all my late grandfather, used to get jilipis for me when he used to visit me on weekends when I was about eight living at Dhakuria at Calcutta.

As I was about to leave the owner offered me another plate of jalebi. I protested. I was full. Both he and his helper insisted. Then I looked at Ustad and his eager eyes. I  bit into a jalebi. I broke into a big smile.

The trio beamed. Just as Muzaffar, the bhajiyawala, did when he saw me yesterday. And the bearded the guy at the counter of Fountain Plaza when  a few minutes before that. And as did Parvez  when I dropped in at Ideal Corner for lunch today.


How am I ever going to leave Fort? 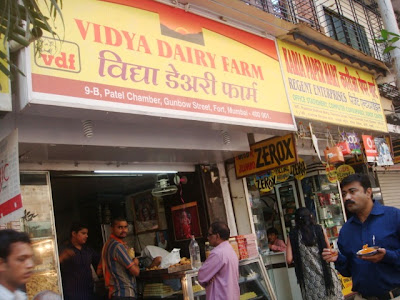 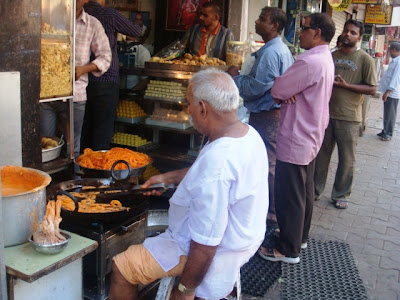 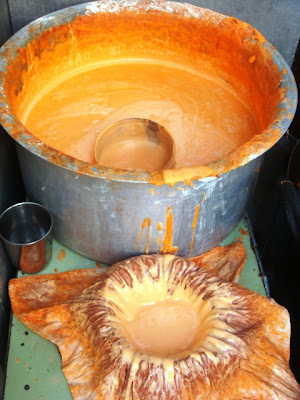 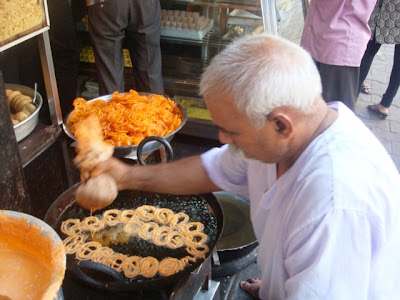 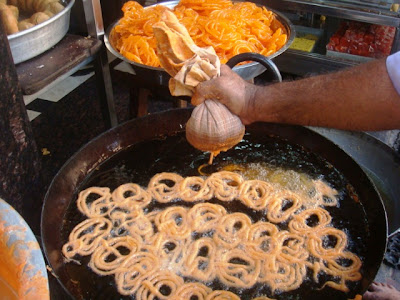 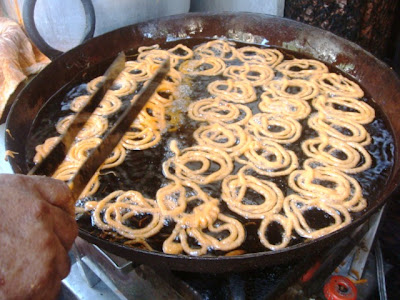 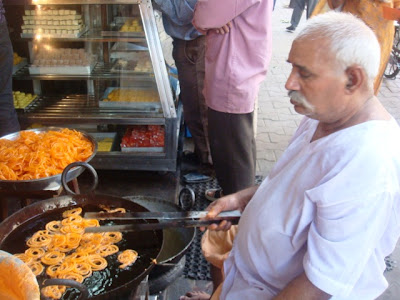 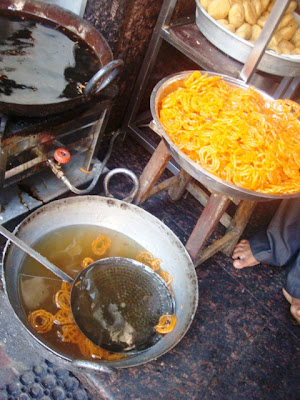 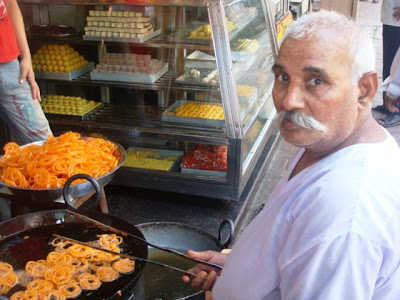 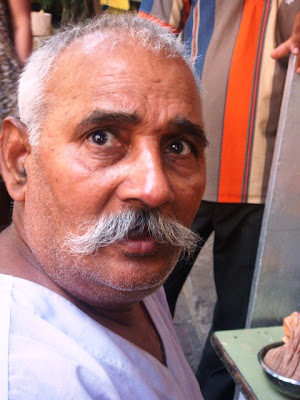 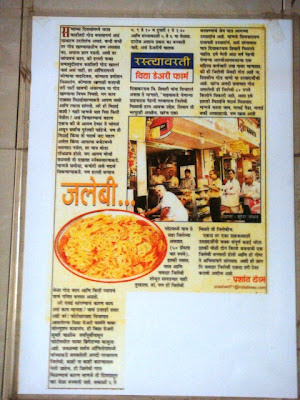 hamaarethoughts.com said…
that waz quite a JALEBI (confusing)post...it was for jalebi or mustache?ha hahaa hhaa had so much fun reading it...you seem to be having lot of fun...with fritters and jalebis :)
the pictures are aWESUM!!all apna indian crowd and cute lill shops!!
28 October 2010 at 04:23

jjs said…
miss the jalebi at muzaffarpur(bihar), orange in colour and little sour, it was amazing. there is shop, jalebiwala in chandnichowk, if in delhi, please try it, people say its almpst 100 yrs old. ll try to get a pic of the jalebis.
28 October 2010 at 10:41

Scarlett said…
I love jalebis! Especially with kachoris & aaloo sabzi. I prefer the north Indian jalebis to the Bong ones, though. Yumm!
28 October 2010 at 11:49

Sassy Fork said…
Love the way you bring out interesting things about everyday people
28 October 2010 at 22:20

The Bride said…
I'm loving your Fort posts not just for the food but the people. It's heartwarming to hear that there are so many humble, generous and openhearted people lurking on every street corner.
29 October 2010 at 07:06

nimisha said…
I have been a follower of your blog from quite sometime and all your post related to kolkata or giving the glimpse of the city really make me nostalgic as i have spent very important years of my life in the city.

me waiting for some of your personalized recipes from quite some time...

Unknown said…
Knife Uncle.. this is just getting better and better. You are in this great space. Just keep going.. what are we all going to do when they move you from Fort. Can we write a petition to your boss. Also Allahabad walla jalebi walla is awesome. And dude- the pics kya baat hai. they are seriously good.
31 October 2010 at 17:04

@Ips, yes the pale yellow, chubby ones, slightly soft and squishy, a touch of fermented sourness

@Scarlett: That sounds like the beginning of a beautiful breakfast

Kalyan Karmakar said…
@Priya, hope you got them

@The Bride...yes Fort has been really a Purple Patch for me...its been an amazing experience\

@Nimisha, thanks...there's one coming up soon :)

@Curry Spice...please do. You do know that I have been influenced by your fantastic style of photography. Any improvements are purely due to that
31 October 2010 at 17:29

Sin-A-Mon (Monika) said…
damn now I am craving for jalebis early in the morning and u dont even get jalebis like this in bangalore
24 January 2011 at 08:06