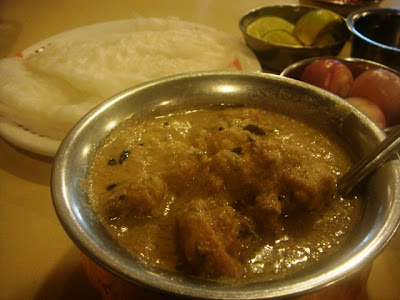 Yes, I know its my second post on the restaurant. But this post is special. It is about a dish which appeared out of nowhere and won my heart. Unplanned. Like a classic romance.

I was famished at lunch time and was busy at work till 1.30 PM. I then rushed down brushing away folks who still wanted to meet me. I was hungry. A hunter on the prowl. I didn't have a plan. I didn't want to eat dhansak at Ideal Corner again.  Nor did I want to go to Swagath and eat something vegetarian. I walked into Harish Lunch Home. A strong smell of fish hit me. I was still reeling from the memories of Howrah. I ran out. I ambled across a few more lanes. Saw the restaurant named Udipi. Walked in. Saw some half eaten vegetarian thalis. Walked out and returned to Apoorva. This time I sat downstairs in the non air-conditioned segment.

I wanted meat and ordered a chicken stew with neer dosas. You get appams only at night here. Prabhakaran, the smiling waiter from Udipi in Karnataka, got me the stew.

I was seduced. In its spell from the first delectable bite. Ready to climb the highest mountains, swim the furthest seas, battle the fiercest lions, wrestle the strongest Kazakhs ... for the stew had won my heart.

It is common to use idiom of lovemaking when it comes to food. The merits of this could be debatable. But this chicken stew was truly sensuous. The curry was ethereal. The texture, a work of art. Reminded one of Cleopatra and her baths in the milk of asses. Light and yet full bodied. Deep and mysterious. The sauce was alluring. Had the slight sweetness of coconut without its overpowering fragrance. The taste was complex and yet simple. You could sense the poetry of its spices. Condiments which titillated but didn't bull doze you. The stuff of poetry. Move over green, red and yelllow ... the time of the stew has arrived. The stew combined with the neer dosa like figurines on a wedding cake. 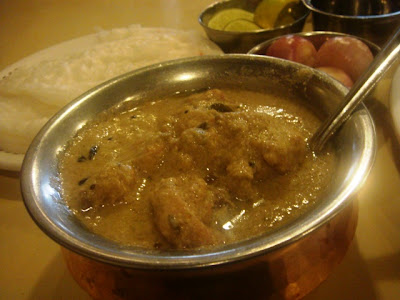 Prabhakaran told me that the stew was from Kerala even though served in the Mangalorean (from neighbouring Karnataka) restaurant. He explained that Mangalorean dishes are more hot as they have chilies in them.

The owner, Chandra, whom I met last time, joined me at my table. According to him, the flavour of the  original Keralite stew came solely from coconut milk. He claimed that the stew at Apoorva took this tradition forward as they added condiments such as garlic and curry leaves to build on it. Well, the result was quite celestial. Chandra told me about his plans to convert the restaurant into a fully air conditioned one. His policy of washing his restaurant thrice a day would probably keep it from becoming smelly. He told me about the other two restaurants that he owned. A vegetarian place, whose name starts with A I think, which he apologetically mumbled about. And Garden Fountain whose mutton masala Mumbai Central praises. He also told me about where to find the Keralite Muslim Beef and paratha place that I was looking for. 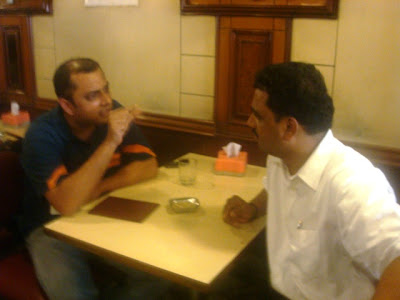 I am off to Calcutta tomorrow for my brother's wedding. I really hope that I don't have to give the birds and bees talk! Will stay back for a bit of the Pujos. Then back to Mumbai for the weekend and then Gurgaon. So the earliest I can be back at Fort would be a week and a half from now. How will I survive?
Fort Mumbai highs South Mumbai South of the Vindhyas Vintage Bombay

Unknown said…
This is why I read your blog super regularly. I learn from you.. what u capture in words I hope to capture in Photos. Romancing the chicken stew.. MMMMMM!!!
9 October 2010 at 10:01

Anonymous said…
Survive on the memories and the tastes as they linger on... the way I'm surviving on the memory of a certain bacon pasta that I recently had. The very thought is comforting...

Journomuse said…
Apoorva was where I had my first taste of neer dosa and chicken gassi...i miss neer dosas :) thanks for bringing back the nostalgia of yummy taste though..
9 October 2010 at 22:12

Kalyan Karmakar said…
But he's such a baby. Was glad to see him finally take his plate back from the dinner table in his own house at Gurgaon
24 October 2010 at 03:08