I didn't have a plan for lunch today. Was my usual half awake Monday self. Went down. Wandered aimlessly. Skipped Swagath and its thali, Ideal Corner and its Monday biriyani, walking down the lanes of Fort on a cloudy, grey day... and there I was, in front of Fountain Plaza.

I walked in. Found an empty table. Sat down. Pointed out at the remnants of the fierce looking plates of  chicken at the adjoining tables. The waiter told me that it was 'roast' chicken. I called for a serving. And parathas or porotas as Berges pointed out at Twitter. Garden Plaza was a Muslim Keralite place as well. It's speciality is the biriyani according to MumbaiCentral. Fountain Plaza was larger than Rahmaniya. Non air conditioned. Apparently offered accommodation too. It is twenty years old.

The porota was nice and soft but I must say that the one at Rahmaniya next door was even better. The latter was Muslin like. Fit for a Nawab. The porota at Fountain Plaza was almost up there. A close second. Delectable and tender.

The 'roast' chicken seemed like a very juicy, deep fried chicken. Nice and firm. Cooked to perfection. The sort of texture and tautness botox promises. But this was natural. It was coated in a red spice mix which looked very menacing. It threatened to set you on fire. Looks were deceptive. In reality it was passionate without being overbearing. The right balance of spice designed to throw out any remnants of Monday Blues out with the dish water. It was the sort of dish which would make you stop looking at life with a jaundiced eye. It brought back the joy and art into living on a Monday. Seventy five Rupees ( 1.5 USD) for a plate of roast chicken, two porotas and a glass of nice, hot, tummy settling rasam on the house. An honest lunch.

Feeling at peace I looked across at my neighbour across the table. We got talking. Inayat (if I got the name right) had ordered a plate of surmai fry. This came with a coconut milk based gravy and he ordered a porota with it. We discussed the merits of eating rice versus roti/ porota with fish. Inayat, who had shifted into Mumbai a while back from Bangalore, told me that he preferred porotas even though South Indians ate rice with fish. As did Bengalis I told him. I told him about my shock at seeing people eat fish with rotis instead of rice at Saayba years back. Inayat told me that fish was the speciality of Fountain Plaza. We were two strangers, yet it seemed as if we ate lunch together everyday. .

He told me that he had lost close to thirty kilos over the last three years. Hence he skipped dinner and just ate papayas at night. He ate fish and porotas as he tried to avoid the more fattening chicken and rice. He told me with a grave face about a report he read on the obesity problem amongst European kids. I told him that I need to lose weight too. He looked at me and said, "but you have height on your side". We chatted a bit more about 'today's youth' and their carefree, spendthrift ways, about how they drink Colas at the drop of a hat and become fat.

Then this smiling stranger offered me a bite of his rather slim sliver of  fish. I politely refused at first. And then I felt at home enough to take a bite. The fish was very fresh. Masalas exploding in your mouth. Cooked in the typical Indian South and West Coast style where the spices often overpower this fish. A pick me up if there ever was one. Inayat broke into a big smile as he saw the look of turbulent joy on my face.

We headed our separate ways. The week had finally started for me. In the warmest possible way. 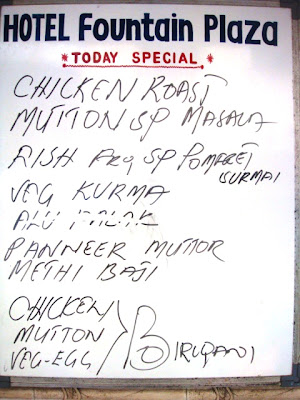 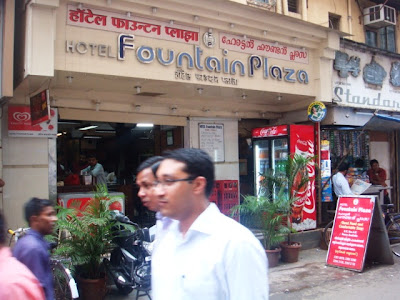 raxter said…
Damn...I order this as takeaway lunch from Fountain Plaza every other day but it just doesn't seem as nice (or taste as nice) as your pics!!

I have been lurking (drooling) long enough at Finely Chopped but the mere mention of Fountain Plaza meant that I had to delurk. I work in Fort, love to eat, am an aspiring foodie and perhaps one of these days I can tempt you with some Kerala 'sadhya' (Kerala Hindu style thali)at a hole in the wall place near Fort, eh? :)

Unknown said…
I can't believe I read this post while I'm fasting- (dont ask - its to give mom company). Good lord it sounds so good. And the photos my friend very drool worthy.
26 October 2010 at 13:28

Raxter, I'd decided not to order in while at Fort. Let's do lunch

Raxter, I'd decided not to order in while at Fort. Let's do lunch