Finding love within the temples of Doi Suthep, Chiang Mai


I went to Penang a few months back. Did nothing. Just walked up and down the roads outside my hotel at Georgetown. Had the holiday of a life time. Didn't see the famous temple there. Or the beach. A true Seinfieldian holiday.

Then I headed back to the Orient. This time to Chiang Mai after Bangkok. I landed there and realised that it reminded me a lot of Penang. Relaxed, laid-back, earnest, honest, history peeping out from the back of its busy and yet sleepy lanes. I was having a nice time doing nothing. Absolutely nothing. Well, I did go to a cooking class. And a night market. But I didn't shop there. And a man has to have dinner right?

I skipped the elephant farm at Chiang Mai, the panda zoo, jungle treks (but of course) and the much touted 'traditional  Northern dinner with dance and fireworks'. But then I gave in. Quite a few people told me to go to the Doi Suthep. Some temple or so on a mountain. I  thought that I'd go this time rather than do a Penang. I booked myself into one of the combos from the hotel and set off next morning for my 500 Baht tour.

I chose a 'traditional' village over the summer palace for the add on. We stopped there first. The icy cold wind of the hills woke me up. The fresh breeze cleared my sleepy eyes as I realised that the 'traditional' village was nothing but a Tibetan market. That too, sans momos. Which put paid to my breakfast plans. Our tour guide desperately tried to make our group of six or seven people buy something ... weaves, 'Royal Produce', poppy flower (not for sale) and even bows and arrows.... we bit for nothing barring a ten baht ticket to see a little waterfall. 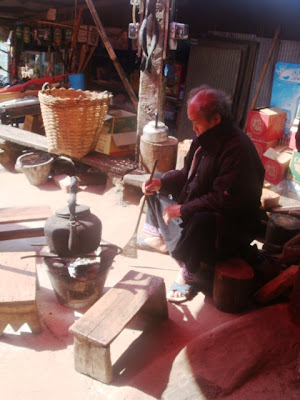 We then drove down to Doi Suthep. The thing about Doi Suthep according to web sites is that you need to climb some 300 odd steps to get there. Well our entry included a trip up a lift which was more my type of pilgrimage. We reached there and were told the rules - barefoot, covered bodies, no touching the Buddhas or the monks, no showing affection to another person - well no one told that to the little puppy who welcomed me as I was about to enter the temple.

I went in ... golden stupas, pagodas, gongs, monks, people praying, lotus flowers, incense - it's just that if you have gone to as many Chinatowns as I have then you begin to develop a blind eye to all this. I respected the place for its spiritual and religious significance... but frankly organised religion leaves me cold. To me this was, with due respect, out of a set for Tintin in Tibet.

I draw my spirituality out of people and nowhere do I sense it as much as I do at the Hawker Carts of the Far East  with their simple, fresh, nourishing, tasty, affordable food ...dished from constantly bubbling hot pots.  Food you can trust and draw your strength from. Food which is bursting with life. Food which is served with a smile which transcends language barriers to make you feel warm, cosy and at home. .

But hold on. I did sense a 'li'l bit of the human touch', as Bruce Springsteen put it, within the grandeur of Doi Suthep. There was this chubby British couple with us in the group. The lady wore a tee which said "I beat anorexia". Nice sense of humour. She had a little walking stick. The gentleman wore a tee which said 'Mr Greedy'. They were quite pleasant and kept to themselves. Our guide had told us that he would be with them. The lady would enthusiastically nod and smile when our guide spoke his spiel.

We entered the temple complex. They still held hands. 'No showing affection to another person', remember? Then I heard the gentleman whisper into the lady's ears, "we are walking on brick coloured tiles which have a design of four flowers each with a fifth flower around them".

That's when it struck me. I realised that it wasn't a Bollywood moment when he earlier held her hand and gently brushed it over the orchids at the entrance of the temple. I understood why our guide would make it a point to address her and repeat everything slowly. Even as her partner, the gentleman himself with very high powered glasses, helped her see the world.

Somewhere within the opulence and pomp and religious authority was hidden a little island of love and humanity. Something that would make the most jaded and cynical of minds believe again. 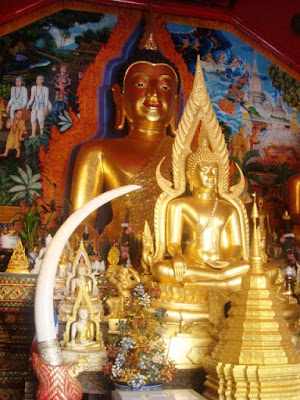 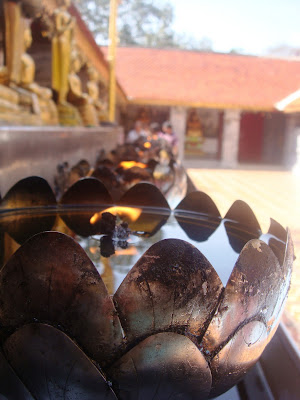 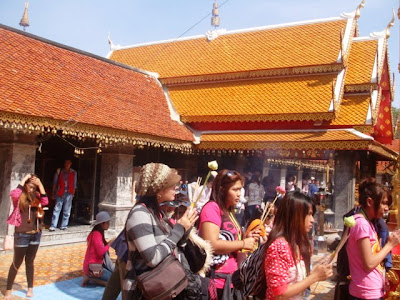 The food angle? Well, keeping with the superficiality of everything I ended up having satays

And then it was Jet Airways welcoming me back to India with their feeble and unsuccessful attempts to force a vegetarian meal down my throat. Good luck indeed. 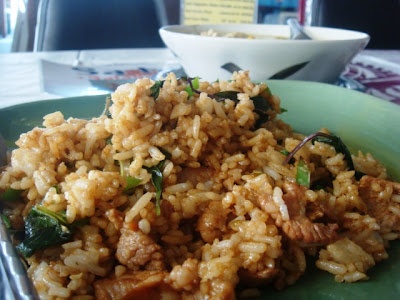 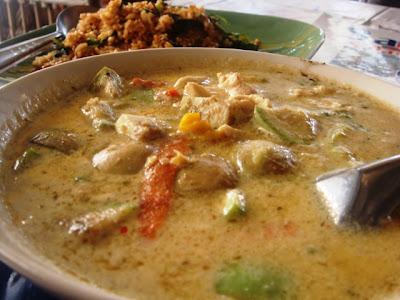 Anonymous said…
omg!!! what a cute chap
And loved this post!

Scarlett said…
It seems to me from your tales & those of my other friends who've been to Thailand/Bangkok, that it's a big tourist trap.

As far as religious places/places of worship are concerned, I try to stay away from them during my travels, with the exception of Churches. I like to visit Churches for their architecture. Otherwise, I'm pretty disillusioned with organized religion myself.
16 November 2010 at 12:40

@Scarlett: religious places grab my attention if there is a historical angle to them. Loved Istanbul for that. And yes, the churches at Switzerland
16 November 2010 at 18:07