on November 05, 2010
Here I am at Bangkok for a conference on Diwali weekend. Honestly, not that big a thing for me. As Arindam reminded me, for us Bengalis, it is Kali Pujo and the growing up thrills of lighting 'chocolate' bombs, kaali potkas and dodomas (lour firecrackers) and then you are done with it. Saraswati Puja in spring and the Durga Puja later sap the festive spirit out of us...we recover just in time for Christmas or 'Borodin.'

I was last at Bangkok on '05 Started the flight otday with an hour of Obama helicopter induced flight delay at the Mumbai airport, over heated tasteless chicken biriyani korma and ice cold lumpy gulab jamun (why do all airlines flying out of India serve biriyani?) on Jet Airways and an in flight entertainment system that crashed as I tried to watch 'Once Upon a Time in Mumbai'.

The lobby of the Hotel Swissotel, Bangkok, looks like an old Hindi film set and you would expect Hema Malini to come slinking down the winding staircase, glowing under the chandelier. The room is fairly grand if old school and yes, K would approve of the bathroom. There's a separate shower cubicle so she wouldn't rant at me for getting the bathroom floor wet after a shower if she was here.

My fellow delegate, Pravin, landed before me but waited for me for dinner. The most sporting vegetarian that I have come across. He indulged me in my 'why eat in the hotel when we are at Bangkok' stand... bravely volunteering to eat just rice.

Then an uninformed trip to Sukhomvit...empty roads...bars with Johnny Walker bottles in cycle carts...girls, or so it seemed, pouring out of their dressed smiling and calling out to you, this was heartbreak street...we finally reached a lane which seemed alive but turned out to be a street of Go Go pubs - 'live shows', 'more girls than you can handle inside', 'suzie wong show', 'twin massages' - everything but food. Yes, there were sausage and curry carts but that wouldn't be fair to Pravin.

Tuk Tuk guy who offered to take us to 'girl's massage' but changed track when we asked for restaurant...off he took us to a sea food restaurant. Our goofy traveller moment. Obviously a tourist trap. Exorbitant. But at least they had a separate vegetarian menu and sweetish phad thai noodles for good old Pravin.

I had a basic prawn red curry...tears of joy as the heat hit me with fish sauce and split bird's eye chillies... no massage could be as relaxing or rejuvenating, this was good stuff and it is so difficult to get a decent red curry in Mumbai....millions of prawns though what the hell were all the green beans doing in the curry?

So this is my first travel post on my new HP mini from the hotel room...no cyber cafes, strange keyboards or business centre woes this time...getting ready for the workshop on blogging today...'The Rise of the Bloggerazzi"... yes, it is Diwali for me

Confession time: I ordered a chocolate ice cream once I went to my room...needed to douse the curry 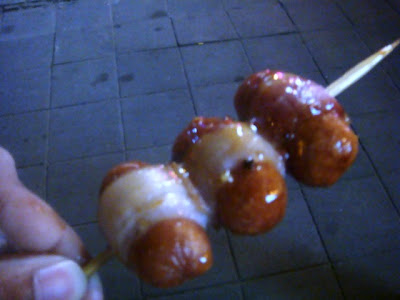 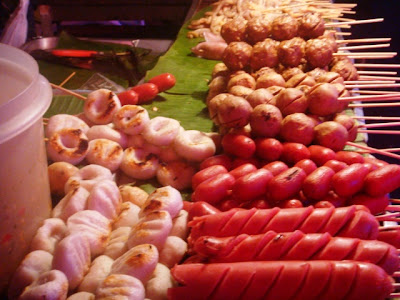 Sayantani Mahapatra Mudi said…
Happy Diwali Kalyan. have a great stay and good foods there in Bangkok.
5 November 2010 at 18:31

jjs said…
Happy diwali, was in pattaya and phuket in june, enjoyed the street food. sausages wrapped in bacon brought back the mempries :-)
6 November 2010 at 00:57

those pics and especially the prawn curry are just so yum.

Unknown said…
Rajasthan may be a major tourer destination that pulls travelers from round the world. The country has created a variety of hotels to suit differing types of travelers. If swank hotels in rajasthan and accommodation choices are plentiful.
4 July 2013 at 11:39

travelchacha said…
Rajasthan Tours - Rajasthan will be a definitive place for the devotees who needs to reveal another and distinctive planet. Holding the pride of being biggest state of India, Rajasthan is also known for stories of brave Rajput Kings, deserts, sand rises, forts, fair and festivals.