Two bad dishes one after the other. That too from two of my favourite places. Places where I have had some excellent food and I am sure these are aberrations.

It was my in laws 35th anniversary on Wednesday and we went to Yellow Tree. Great prawns grilled in lime and butter, customised ice free SOB (sic) mocktail for MIL, great 3 cheese pasta for her, pa in law loved his sandwiches. Baked potatoes wrapped in chorizo on the house for us, soon to be introduced. Loved the way the matronly baked potatoes cut the sharp taste of the tart like chorizo...great pairing. Pity that my penne carbonara was more like a salt free Italian White Curry. Anyway I salvaged it with some salt and sauteed garlic from K's prawns. And the chocolate terrine at the end left us with 'sweet memories' as the occasion warranted.

Thirty five years. Phew! They were celebrating their 25th when I first knew of them. They had gone to Holiday Inn, Goa. K gave me a half kilo pack of cashews that they got from Goa. I finished it as we walked from Nariman Point to Churchgate! 'Those were glory days' ... as the Boss serenaded.

And then I went to Ideal Corner for lunch on Thursday. I wanted to try out the their famous American Chop Suey. Turned out to be one of their lowest moments. Dhansak, biriyani, kebabs, gunpowder pork, sali boti or even fried rice and chicken in black bean dry works there... but do yourself a favour and don't order the chop suey unless you want to punish yourself with salt free tasteless food.

Let me go on record saying that I love both these places and would strongly recommend them...but these two dishes seem to be their black sheep.

Incidentally I almost wavered on my way to Ideal Corner. I passed Mathura Sweets and its signboard with chhole bhature written on it called out to me. I almost walked in a couple of times before going to Ideal Corner. Well, wrong call. Anyway might as well fix things when one can. So I left my chop suey unfinished and headed back to Mathura Sweets.

It was a shop with a sweet counter at one side and four to five tables on the other. Spartan. Clean. Non air conditioned. Cool thanks to thick walls and high ceilings.

I was a bit awed. This was almost a 'Man Vs Food' moment for me. I don't like the concept of the show. Over eating doesn't work for me. Neither does calling the food of other people 'Bizarre Foods'. But could I really eat more after eating half of the American Chop Suey?

Well I did order for cholle bhature and a small lassi. The bhatures (Punjabi flour based breads) were fresh, round, deep fried but not as thick what one gets in other restaurants at Mumbai. Deflated with a hiss once you broke it. Something that called out to the child in you. I did manage to finish the two which came in a serving.

The chhole was quite tasty though oily and spicy. But then restaurant chholes are meant to be oily, grimy and spicy. Looking for a low oil chhole in a restaurant is like going to a strip joint because you want to listen to the music. I had half of the chhole but remember I had already had half a lunch before this.

Interestingly the waiter asked me whether I wanted my lassi after the food or with it. I asked for it with my meal. But later realised what he meant. The lassi was almost like a dessert. Thick to the extent of almost seeming solid. Very sweet with a hint of the sourness or curd in the back. A mid day pick me up if there ever was one. A friend later said that this is how lassis apparently are in North India. Of course a few of these saccharine babies and you would soon be a much bigger man.

On the way out I spoke to the owner, Thakur Ajay Singh, in Hindi who soon switched to English. Turned out that I was at the oldest Mathura Sweets outlet. This is the one beside the Fire Brigade at Fort. Turns out that his grandfather had opened the shop SIXTY FIVE years back. He was from, no not Mathura, but Varanasi or Benaras. Both are in Uttar Pradesh in North Indian of course. The chhole had curry leaves and I asked why as these are used in South Indian cooking. He shrugged and said, "for their taste". Can't argue with that.

Their other branches are at Churchgate, near Yazdani at Fort. Peddar Road which the have hired out to Dominoes. Ajay said that he and his brothers ran the chain. One brother had gone abroad to study medicine. Hence a Mathura outlet became Dominoes.

Mathura Sweets looks like a quiet peaceful oasis. People were tucking into their thalis and puri bhajis, lassis and masala milks. The crowd ranged from office execs to office support staff.

I need to go back for the puri bhaaji and to take photos with a camera. Still am fairly happy with the BB Bold pictures. 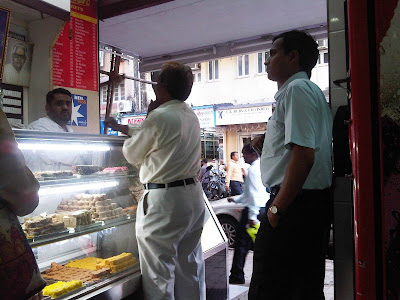 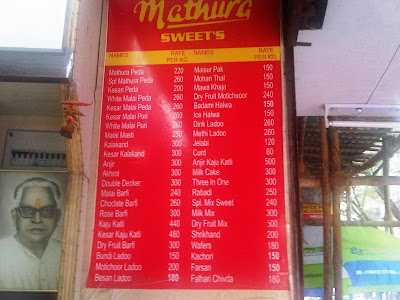 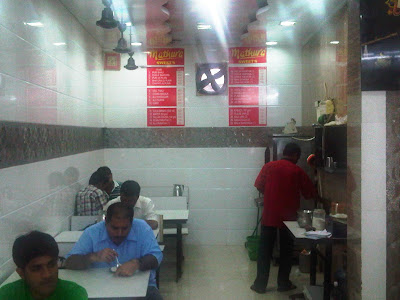 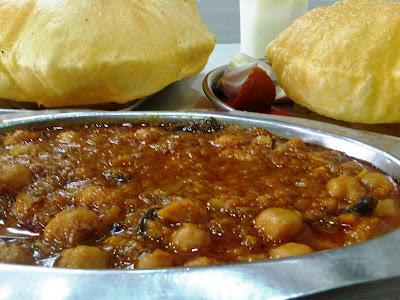 Unknown said…
Ok so I LOVED yellow tree- first time there and great food. thanks for the recommendation...
And where do you come up with these- each post has its own similes.. they are great...
"Looking for a low oil chhole in a restaurant is like going to a strip joint because you want to listen to the music."
I wonder if one day I will come up with a great simile.. Wow that will be the day.
26 November 2010 at 21:25

Kalyan Karmakar said…
@Curry Spice well I need words to bring food alive as I don't have your gift with the lens....though was once chided by a tunnel visioned Brit editor for the use of analogies

@Sassy Fork, I know I spent quite a bit extra for this model so am really happy

Scarlett said…
All said and done, you get the best chhole in Delhi. Restaurants in Bombay don't know how to make chhole, chaat or alu paratha. Case in point - curry leave in your chhole!!

Though I ate some great chhole bhature in Chembur once. There's this small eatery near Chembur station run by a Sindhi (I'm sorry I don't remember the name). Authetic chhole.
29 November 2010 at 15:10

And I loved your comparison of the chop suey and Iraq after the Americans went in.
29 November 2010 at 15:11