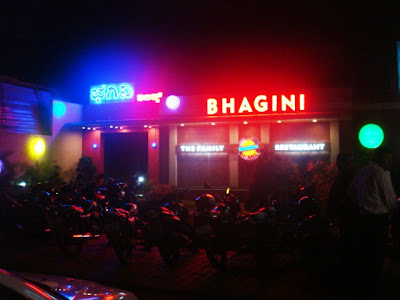 I thought things could only get better after my lonely, congealed food buffet dinner at the Spa off Bengaluru yesterday. I was wrong. Breakfast was no great shakes. And then there was was lunch. A few bites down and colleague of mine looked up and said "I can't have this for dinner today".

And so I lead a renegade band of three people from my group, and one more who joined us, out of the Spa for dinner. I could feel the revolutionary spirit of Subhash Chandra Bose and his INA running through my veins. I headed in search of an Andhra restaurant. My lunch mate MumbaiCentral said that this was a better bet than Kannada food at Bengalore. I trusted her judgment. Even asked her what to order.

We were pointed to a restaurant called Nandidi which was apparently a 30 min drive from the resort. And then there was Bhagini, apparently not as good, but 15 minutes away. 40 minutes into the drive, our cab crossed Bhagini! By that time we had got used to Bengalaru time which seems to belong to a different time zone. So we decided to get off there and give the elusive Nandini a miss.

It was chilly when we got off. Pleasant change from muggy Mumbai. We had been told that Bhagini was a dhaba which had apparently had a makeover. We walked in. The place was segregated into different 'garden' sections. Covered spots, open in the side. Psychedelic lights flashing in between the sections for some reason. We were ushered into the 'family' section where there were other mixed gender groups versus the men only groups in the other sheds. The seating was basic, the walls pink... looked straight out of one of the places which the Highway On My Plate guys, Mayur and Rocky, would visit.

We waded through the Chinese menu and finally reached the Andhra section. Following MumbaiCentral's recco, I ordered a nati chilli chicken fry (country chicken), which had a walloping taste of hot chillies. A pleasant change after the faceless spa food. Then crab fry which was served in a painted crab shell. Odd bits of crab meat in another incendiary Andhra spice base. This was good food and some of us begun to grin widely. Andhra chicken kebabs ... succulent, juicy deep fried chicken which could out Kentucky KFC...the night was getting better by the moment. With Old Monk at Rs 26 for 60 mil, it would, I guess. 'Goontoor' chicken fry which came in a delectable bed of hot green chillies, tropical curry leaves and soothing garlic pods...tender meat enrobed in a fiery velvet spice mix. Nati (country) chicken curry which was similar to the gassis of  Mangalorean restaurants such as Apoorva and Mahesh of Mumbai. We had over ordered by then. There were three non vegetarians in our group. But we had to order an Andhra mutton biriyani. It came well recommended. Turned out to be the best Calcutta biriyani that I have had out of Calcutta. Firm rice, no gravy, delicately flavoured and tender mutton. I could see my fellow Calcuttan purr in delight.

The manager was a bit terse with the poor vegetarians and turned them to the Chinese menu saying there was no vegetarian Andhra food. Poor things were struggling with mushroom Manchurian and then tough rotis and horrid cauliflower sabzi. That's when I took over and ordered neer dosa and vegg gassi for them. The veg gassi turned out to be more like a veg a korma at Mumbai. Thick versus the thin gassis of Mumbai. But who cared, the vegetarians finally got some food which they enjoyed. I did my good deed for the day.

I will try to sum up the post the way Rocky and Mayur of Highway on My Plate, the only food show on Indian telly with a soul, would: 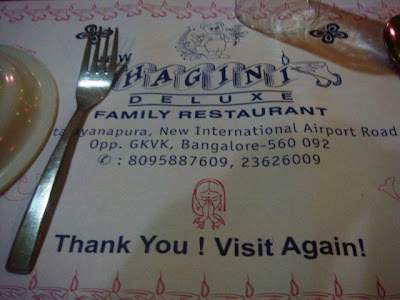 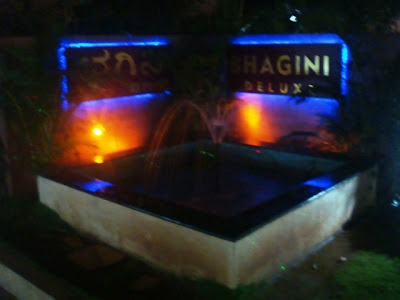 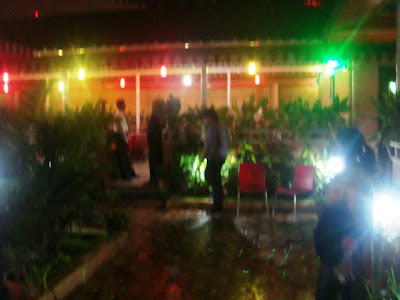 mumbai paused said…
I have spent many afternoons, (when I was supposed to be in catering college, cooking) sitting on charpoys and sipping beer with friends in Dhabas around this very place. This was way outside the city at that point of time. The Dhabas were very basic then and were also open very late into the night. Over time they deteriorated and I guess they have a new avtaar now.
19 November 2010 at 13:25

Anonymous said…
You should try Nagarjuna for their biryani and green chilli chicken. I love this even though I'm partial towards the Kolkata style biryani with the odd aloo and dim sheddo.

Do try out Esplanade at Koramangala for excellent Bong fare, and if you're there till the weekend, do try the buffet.
Ditto for Koshy's at St. Marks Road, Unicorn on Infantry Road for Mangalore food (you have to try their chicken/prawn ghee roast!)You also have an Oh Calcutta on St. Marks road if you're interested. If you're hearting Kolkata style Biryani, Lazeez at Koramangala/M.G Road. Red Bamboo Shoots at Museum Inn Road for great Chinese and A Spoonful of Sugar at CMH Road and Corner House (Koramangala/Brigade Road/Indiranagat) for your sweet fix. And if you have time, Daddy's Deli for great Parsi food at Indirnagar. You can also pack some goodies from Cream and Fudge for Kainaz :)

Unknown said…
"You can take The Knife to a hotel buffet, but you can't make him buckle"
I have a feeling i will be using this line one of these evenings...
19 November 2010 at 20:43

@Curry Spice...out of office I hope

Ab$hake, wow, wished I could have passed on my compliments through you to them

mumbai paused, those sounded like happy times. These dhabas have glammed up now