The most beautiful mortar & pestle this side of Chiang Mai... penne pesto in sausages, rude cheese at Godrej Nature's Basket, Bandra 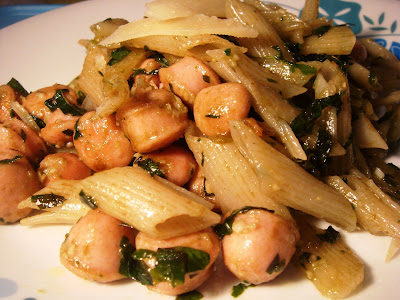 Sometime back I bought a mortar and pestle. A petite, shiny marble one. Inspired by the Jamie Olivers of the world, I tried to make a pesto in the mortar and pestle. Later tossed prawns in some white squishy stuff and flattened basil leaves. Gia, our guest that night, sportingly praised the dish and then pointed out that I needed a bigger mortar and pestle, that I should have smashed the garlic, pine nuts and cheese one by one, that I should have removed the stalks from the basil leaves and then crushed the pesto mix.

I heard her. Next time I used the mixer grinder to make a perfect pesto.

Then I went to a cooking school at Chiang Mai, Thailand. Inspired I followed that with a trip to the local market. I lugged home the most beautiful and sensuous mortar and pestle West of Chiang Mai.

Yesterday I made a pesto mix that was much closer to what was required.

I remembered Gia's wise words. I took a teaspoon of pine nuts and hammered into them in the new mortar. They became powderish. Then I added a tablespoon of peeled garlic. Bang bang bang. A proper paste. To this I added about 50 g of Parmesan. More pounding. A proper paste again.

Talking of Parmesan, what was with the girl at the cheese counter of Godrej Nature's Basket, Bandra, yesterday? She guarded the cheese as if she wanted to eat it all herself. When we wanted to taste some she reluctantly parted with a sliver for one and for another said we could not taste another as there was very little. So only if we were buying it. We did buy a Gouda but frankly I was put off by the attitude of this Sour Puss as well as the long strand of hair in the cheese display. I went to Sante at Pali Naka and bought my Parmesan which was one fourth the price of that at Godrej Nature's Basket. I must say that the guy at the meat counter at GNB was nicer and we picked up some ham and Thai sauces and ice tea too. But seriously, they need to put a less possessive person in charge of the cheese counter.

Well coming back to the pesto I took two handfuls of basil, leaves, removed the stalks as Gia said, and added them to the mix in the mortar. Wham bam bang bang and soon I had a good mix. I added a couple of tablespoons of olive oil and pounded again. A jet of oil flew out with the first bash. I had to do it far more delicately after that and blended it all together with a spoon. I was quite happy with the end result. It was 'the beginning of a beautiful friendship'.

Here's the recipe for the sausage penne in pesto that I made: 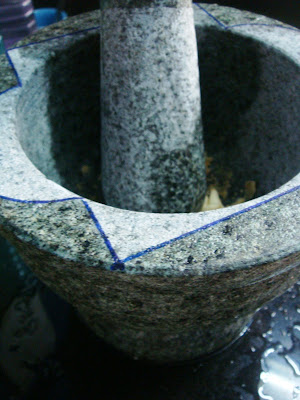 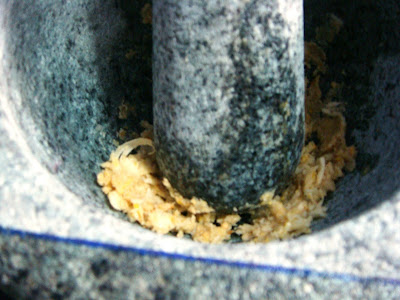 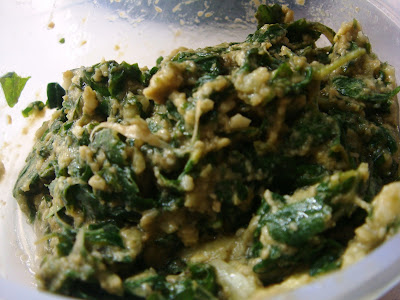 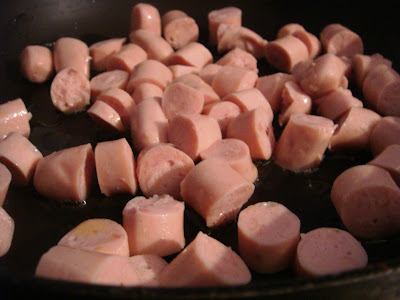 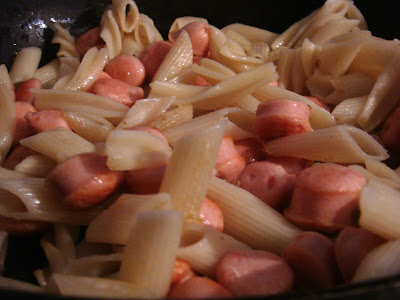 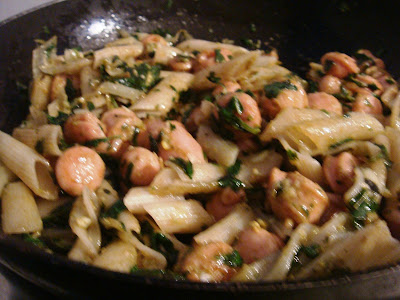 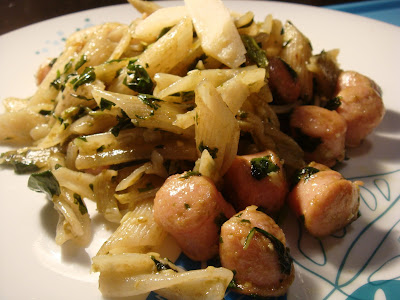 Scarlett said…
I must say that for a man who dislikes pasta, you seem to cook it quite frequently ;)

Kalyan Karmakar said…
Well, I am married to a woman who loves pasta, Scarlett, plus its so easy to make

@Curry Spice...well you are the customer right...so what guts?

Happy walker said…
This comment has been removed by a blog administrator.
16 November 2010 at 19:23

Ma said…
was amused to see the picture of ur mortar n pestel. Funnily enough, we too bought three pairs of mortar n pestle from Agra from a shop near Tajmahal. Saw Kutb Minar in Delhi n Tajmahal in Agra after about forty yrs like Rip Van Winkle. Only difference is that R V W woke up after twenty yrs n me after forty years. Was very happy to see that both the monuments were sparkling unlike their earlier faded n dusty look. Regarding food, we mostly had food at the revolving restaurants of Hotel Pushp Villa in Agra n at Macdonalds in Delhi. Nothing local. Opening a Facebook is in no way in my menu. My good old diary is best for me.
Love
ma
16 November 2010 at 21:50

That's quite a coincidence. Taj Mahal's aplace I am yet to see myself.

I often do cite your Europe photo scribbles when I tell people that blogging was inevitable for me. It was in my genes.

Miri said…
hmmm....i have been having second thoughts as well about Nature's Basket after the initial euphoria of having a gourmet shop right next door to home, faded.

They once had a guy with conjunctivitis manning the meat counter. Didn't speak of a concern for quality to me.
22 November 2010 at 16:55