I knew what was coming by the third time I heard this, "Today is Buddha Day?"

Our enthusiastic, over friendly, effusive and over eager stranger of the moment grinned, flummoxed. Pity that I fell for this scam the next morning as the cabbie charged me three times the fare to the airport. And I left behind my cell phone in the cab to boot.

Well it wasn't my plan to go to the Emerald Temple. But I gave in after I earlier ignored Pravin's plans to leave for the floating market at 7 in the morning. He wanted to take photos. I snored and locked myself in my room. I got a text at around 8 am, 'floating market cancelled, will go to Emerald Temple, join me if you want'. Well, what the hell... he was a good chap and I had nothing else to do. I went down and joined by my fellow conference speaker but not before I had a hearty breakfast at the hotel.

We got off a Metro station and were looking for a Tuk Tuk when a guy came up to us and gave us the same 'Buddha Day' spiel trying to take us somewhere else. I almost gave in. But our Tamillian friend exclaimed 'chu*%$a bana rahe hain', in chaste Hindi that he picked up at Bihar, and chased them all off.

Pravin doggedly ignored the friendly guy on the road, the tuk tuk guy, the gardener at a temple as we trudged on, dropped off far from our destination by a tuk tuk guy whom we refused to then pay...  I was sapped and sleepy. Pravin, bless his heart, offered my Oreos and chips which he'd shopped for me at 7 Eleven for the Floating Market trip. But I needed something stronger.

A fried sausage on the stick and coconut water nectar later I woke up, life crept into my body....and the Temple and Royal Palace suddenly appeared in front of us. After what seemed like marching across the whole of Bangkok with Phuket, Pattaya and Phi Phi thrown in too. We went in after a hefty entry (350 Baht) unlike the Thais who went in free.

We walked around, took the official tour with a grim lady and her trainee. Pravin brandished two cameras. The joke was on him. You couldn't click the Emerald Buddha from inside. We walked around the buildings as I remembered K and my trip back here in 2005. Looked pretty much the same. And there was the same smug look on the face of fellow Indian tourists when the guide recounted the story of King 'Lama' from India. 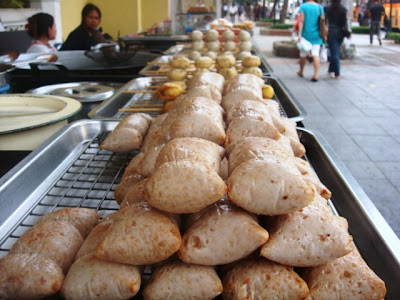 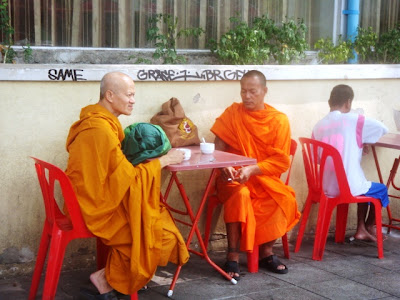 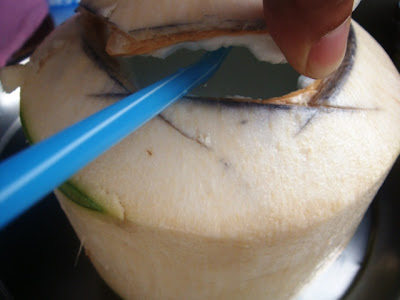 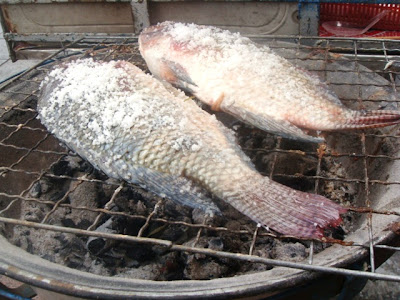 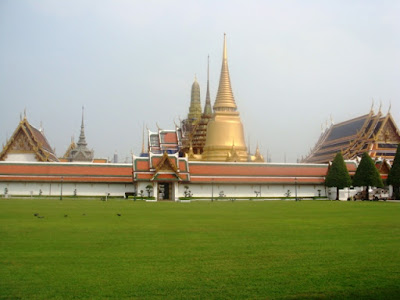 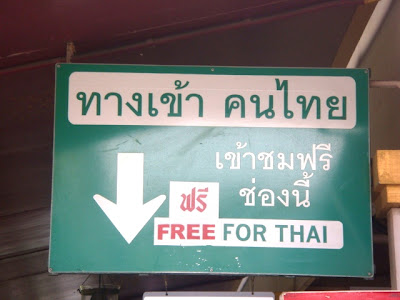 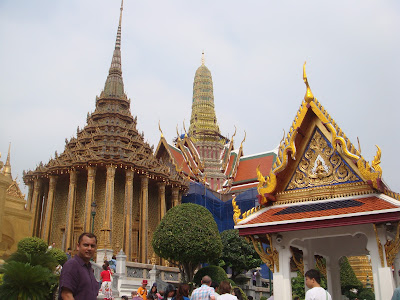 I had the presence of mind to ask the official guide about places to eat at. "Where do locals eat?". She pointed us to the 'Pier'. Reached there and I was finally at my sort of temples and palaces....rows and rows of food carts and stalls with fresh stuff being fired up in woks and hand grills - tom yums, satays, banana fried, sticky rice or silk worms...name your dream and you would see it. A Disney land of food.

I looked longingly at the street carts with curries...then sat down at a street restaurant in deference to our vegetarian friend. They had a vegetarian section the menu, showed their cooking oil to Pravin

(written in Thai but possibly not fish sauce) and made him a spaghetti. I ate a pork green curry which was simply celestial...more sophisticated and exquisite than anything that we saw at the Palace or the Temple. The curry was very delicate and yet had the deep passion of chillies rumbling deep inside. A 70 mm experience that I finished off with some fried banana fritters. 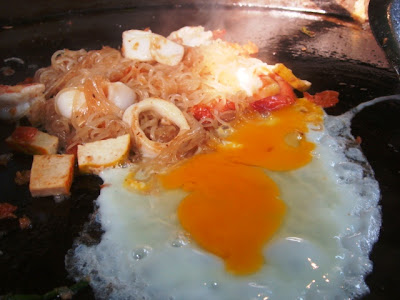 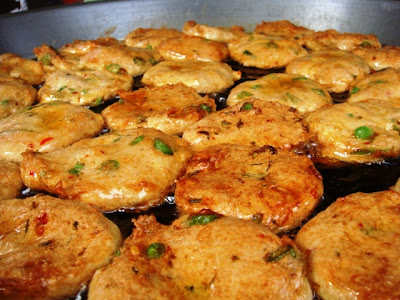 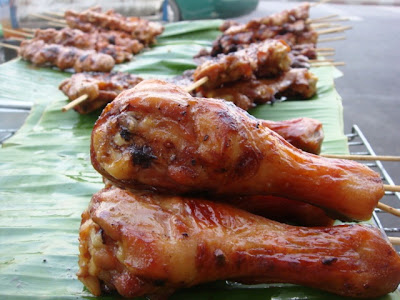 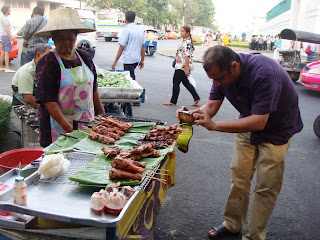 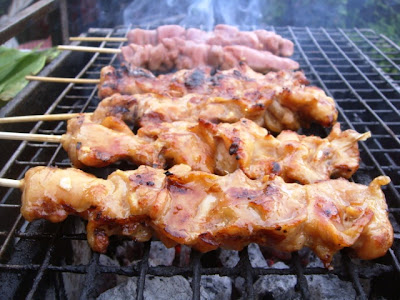 We got a metered cab after saying no to a number of tuk tuks and cabs who refused to go on meter, reached a metro and then Sukhumvit. Somehow Sukhumvit with its grey buildings, Linking Road like street shopping, quiet and largely empty and deserted Watergate Mall reminded me of Miss Havisham's house. Despondency and despair shrouded the memories of the buzzing city that I had from 2005...we had come back too late...the music was over. 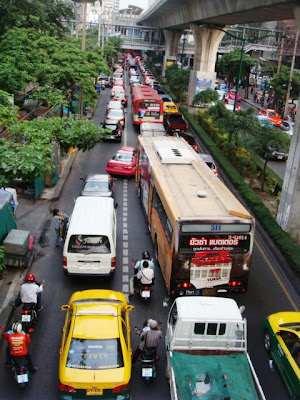 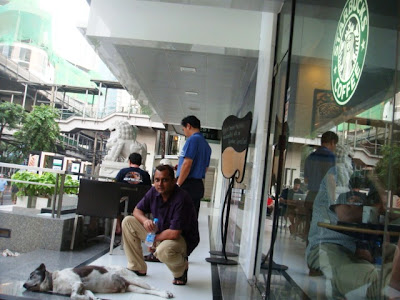 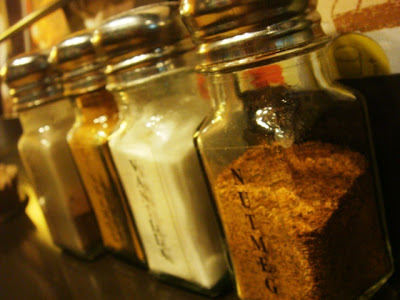 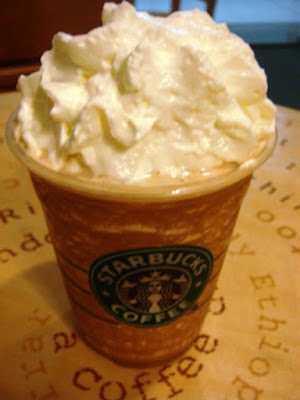 I went back to the hotel for a soak in the tub while Pravin hit the department stores to shop for his family. We met up again at Suan Lum night market (Lumbini Metro Station). Gone was the bright and busy night market that I remembered. This had the deadly calm of an old age home. The packed food court that I remembered from last time was almost ninety per cent empty...the girls aggressively selling beer a few years back, standing lazily at a corner now.


Pravin had a pad thai. I ordered roast duck and rice that was leagues behind the Roast Duck at Ristoraan Sunrise that Arindam took me to at KL. The oyster omelet that I ordered at another stall almost reclaimed the night but for its lack of salt ... symbolic of Bangkok, a city which seemed to have something missing this time. 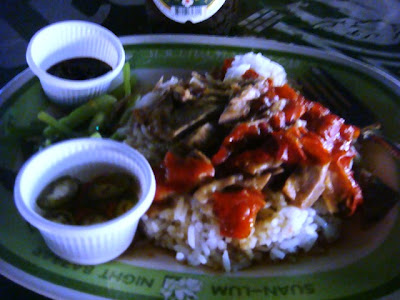 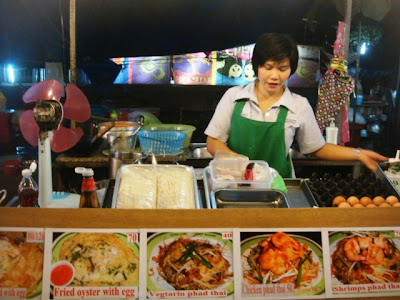 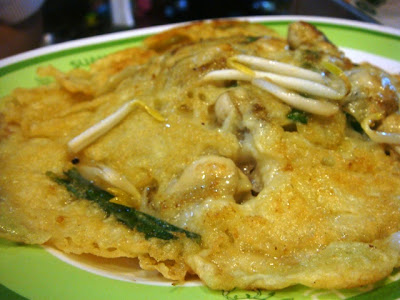 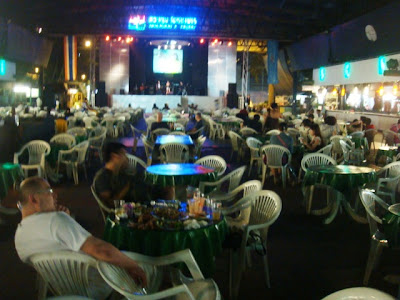 Scarlett said…
Thank God for Starbucks! As long as there's Starbucks, there's hope in the world.