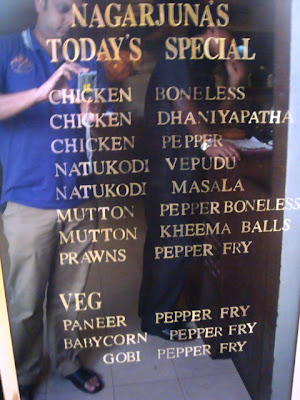 I got about a million suggestions on where to eat at Bangalore. The city does evoke some passion! Problem was that I just had two and a half eating opportunities. And one tummy. I had to be very strict. Pecos, one day it will be your time.

One of the names that cropped up was Nagarjuna. A name which evoked memories of a Hindi film called 'Shiva' from our school days with a South Indian actor of the same name. The hero a shy college guy, a timid dancer, pushed by the bad boys .. snatched the chain of a bicycle and beat everyone in sight. Gruesome with no food connect. 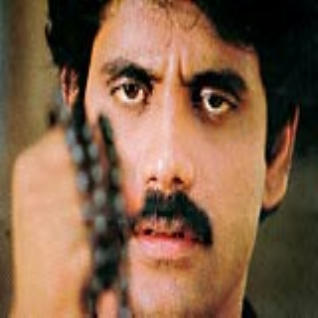 I literally had to snatch a few minutes for lunch. Nagarjuna with its Andhra food seemed to be the most practical option. I walked in and then up the stairs into a buzzing cavernous restaurant. It was past 3 PM and yet there was a queue to get in. Different from MTR though. This was air conditioned, had sofa booths. And meat. But the joy de vivre and sense of bonhomie was just as strong.

I was led towards a table. I saw a group of ladies digging into biriyani at the table beside me. Served on banana leaves. I quite liked the Andhra biriyani at Bhagini and the biriyani at Koshys. This looked good too. But I wanted to try something different. So I followed my lunch-mate at Fort, MumbaiCentral's words of wisdom and ordered a vegetarian Andhra thali (meal) and side dish. I chose 'ghee roast chicken'. Ghee roast was MC's reco too as well as that of the waiter who took my order.

I waited and soon a banana leaf was laid in front of me. Twice in a week. I guess this has been the week of coming in touch with my vegetarian side. A young boy came and served rice. I looked puzzled at the condiment pots on the table - roasted chillies, pickle, a green chutney, yellow powder. Our waiter came to me and told me, in English, to break the pile of rice, put some of the yellow powder on it and that he would add ghee after that. This done, I looked at the bowls piling up as well as the dishes served on my banana leaf. "Eat one by one" was his advice.

Which is one I got a neighbour to share my table with. Turned out that his name was Sudip and that Nagarjuna was a favourite haunt of his. I looked to Sudip for directions on how to navigate the meal. Problem was that he was North Indian from Delhi who was based at Calcutta on work before Bengaluru. At Ranikuthi. Two bus stops away from my house at Ranikuthi. After I left the city though. How six degrees is that?

As Sudip apologetically put it, he had no idea about the nuances of the meal. He did smile and say "Eat the dishes one by one". He said this is what he would do even though he had no idea about the 'traditional way' of eating the thali. Sudip was a Nagarjuna fan and liked the kebabs here. The only thing he missed in Bangalore was good, non tamarind infused, North Indian food. "South Indians restaurants serving North Indian food can be a disaster" Malls were his only solution apparently. But that didn't matter today as he dug into his chicken sholay kebab (reddish coloured nuggets) and asked for extra rice.

So how was the vegetarian meal? Well there were two yellowish blobs plonked on the banana leaf. I was enthralled by the taste of the first one - creamy yet robust and solid, mildly sweet, pleasing on the tongue...turned out to be a daal. A speciality of Nagarjuna apparently. Left a distinct impression on you. This was stellar stuff.

The other one was a potato curry which didn't really impress me much. There was an interesting crushed peanut chutney which had a pleasant and cooling effect. Then there were the usual suspects kadi (sour as against the Sindhi version), curd, buttermilk, rasam and sambar. The highlight was clearly the first daal. None of the food taxed your digestive system, very sleep inducing though.

And, in case you were giving up on me, there was the chicken. Very well flavoured, very succulent ... elegant like silk...very different from hot chili  and rather rough taste stereotypes one associated with Andhra food. The ghee roast chicken was served in a bed of fried curry leaves which acted a nice little taste breaker. The ghee roast chicken lived up to its billing and it is a pity that it doesn't have the fame of its Northern cousin, Tandoori chicken.

Sudip and I both washed down our meals with Thums Up, a rather appropriate drink for a Bengali and a Bihari exchange Calcutta tales over Andhra food at Bangalore over. 'Unity in diversity' as we wrote in our essays in school.

On the way out I met Naveen Reddy the manager of this more than twenty five year old restaurant. He has worked here for twenty of those. He told me that the owners Mr Mohan Reddy and his son, no relation to Naveen Reddy himself, come to the restaurant every morning and personally supervise the mixing of masalas and the marination of the food. Naveen said that the spice and heat had been tempered in the food as locals couldn't take the amount of spice that Andhraites needed.

Naveen said that I should come back again so that he could give me a taste of some of their special masalas. 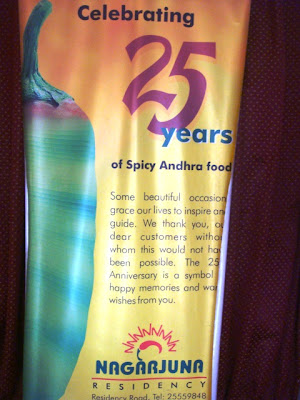 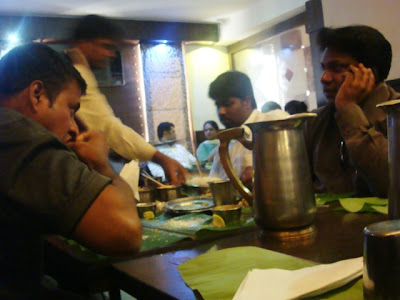 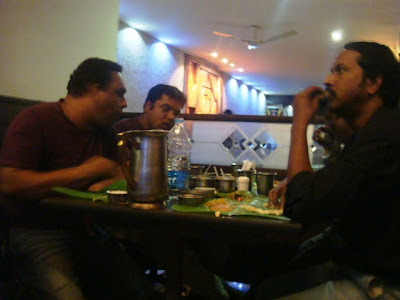 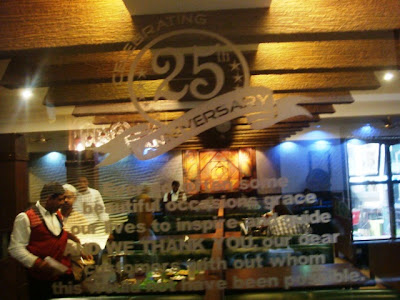 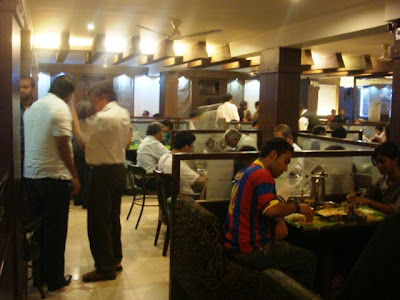 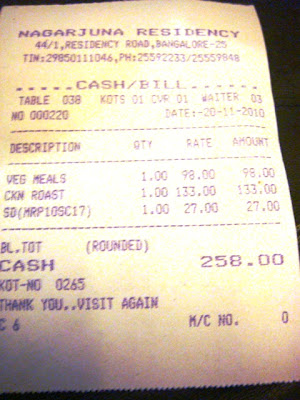 Scarlett said…
I want to have that ghee roast chicken! There's a very good South Indian non-vegetarian restaurant in Cal. It's called Tamarind. You should try it out sometime when you're in town. It's not "grunge" though :P
23 November 2010 at 14:04

Bong Mom said…
There are two Nagarjunas(restaurant) in B'lore, I presume. The Savoy which I loved. This one is good too but all that slurping would make me flinch
24 November 2010 at 00:03

@Scarlett: Well can't always do grunge when in the company of the fairer sex can I :)

Jason said…
Bought back memories with your post..Absolutely sleep inducing...Naga's,as the locals call it,was my intitation to andhra food...The yellow powder is also known as "Gun Powder".....The Andhra Style Biryani is a killer....For the meals I used to order different sides but my fave used to be Mutton Fry and Omellete...As my ofice was on St Marks road,the options around that area is just mind boggling....and Yes Next time hit "Pecos"...you wont regret it....
27 November 2010 at 21:38

Kalyan Karmakar said…
@Jason, I have to go back to Bangalore for Pecos. Thanks for writing in

Sid said…
I have been to Nagarjuna too in 2008 n have off late become quite a gun powder addict...I make it a point to order a bowl of gun powder with ghee separately at Gurgaon s South Indian restaurants...
26 September 2013 at 09:19