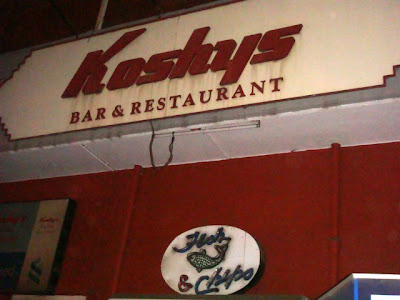 The first time I was at St Mark's Hotel was 13 years back. I didn't have a mobile phone. Let alone a laptop or an email id. I had more hair and was more than 15 kilos less in weight. I lived in Calcutta. Was fresh out of college. This seemed another world as I would walk to to the Vidhan Sauda after the cold cut and muffin excesses of breakfast to make place for the roast chicken in red wine sauce and vindaloo dinners...meals I would describe in letters back to Calcutta. When blogging was not even a dream. The hotel was a year old then. I have stayed here once in between and am now this time after the renovation...when the rooms look modern and yet cosy and the service sweet as ever...making you feel at home.

I met my friends Naina and her husband, Asan. for dinner. Naina, is new to Bangalore, and wanted to take me to the plush European restaurants of the new UB City. I, however, am into what I call 'grunge eating'. I need history, character and a local flavour to go with my meals. So after much discussions and suggestions by folks on Blogger, Twitter and Facebbok, we zeroed in on Koshys. A fact that would be blasphemous to many local Bangaloreans. For Koshys is more famous for its breakfasts than for dinners. I walked down there from St Marks.

Naina told me that she liked Koshy's. That it was more like a Coffee House, fans, but no air con. Not 'fancy' but the crowd consists of 'people like us'. The impression that I got once I walked in was a mix of Coffee House, Mocambo and Oly Pub from Calcutta. Austere lights, waiters in white, basic chairs and tables, creaking fans, yellowing walls and happy, content animated diners. I took an instant liking to the place.


Folks had suggested cutlets, vindaloo and sandwiches at Koshy's on Twitter, Blogger etc. We reached at 1040 PM and the bar shut at 12. So there was a bit of speed dating like downing of our beers, whiskeys and rums. Asan was a generous host and ordered everything that I pointed to.

I fell in love with the mutton cutlet on the first bite. The after taste of pepper was heady. The prawns in the prawn curry were very fresh and were complemented by the gentle brown coconut gravy that it came in. The pork vindaloo was one of the best that I have had. It was not overtly sour or oily. The sauce was thin had a slight sweet after taste. I am not the right person to say whether the vindaloo was authentic or not but gave me the sense of being made at home. It turned out to be one of my favourite vindaloos and vindaloos rarely satisfy me. This hit the sweet spot though. Closing the meal was prawn biriyani. Again the rice was dry, well flavoured and the prawns very fresh. What a wonderful closing ceremony to our first meal together.

Naina and Asan, you made me feel so comfortable and welcome that I have already begun to plan my next trip back.

And guess what, I just realised that I had never met Asan before and had spoken to Naina for all of ten minutes before... though I knew her from social networks of course ... andyet it seemed like we were catching up from where we last left off.

Note: And this is the other side of the story 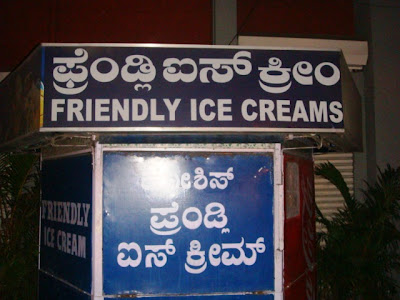 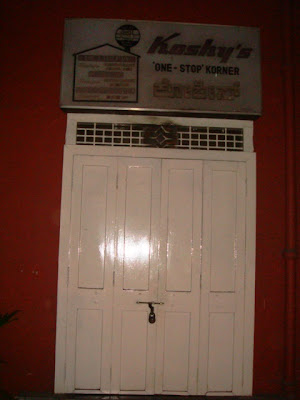 Bengaluru People South of the Vindhyas

Moonshine said…
Thanks Kalyan it was fun!!!!

Sassy Fork said…
Enjoyed this! which is the Kolkatta restaurant which looks like this,features in ads and is famous for adda?
20 November 2010 at 14:57

s amit said…
u really have a way with words.... the details it self along with the lovely snaps gave me such an appetite that somehow i stopped myself from rushing to the place....am new in Bangalore ...shifted base from good ol' Kol.......valo thako , likhte thako
21 November 2010 at 21:27

Kalyan Karmakar said…
Thanks Moonshine for the wonderful evening, really looking forward to coming back. Say hi to Mr A

@Amit, thanks so much for writing in. I was not planning to write today. Your comment bucked me up ...have a great time at Bangalore...a place with many more calcutta restaurants than we have in Mumbai. Cheers, Kalyan
22 November 2010 at 02:04