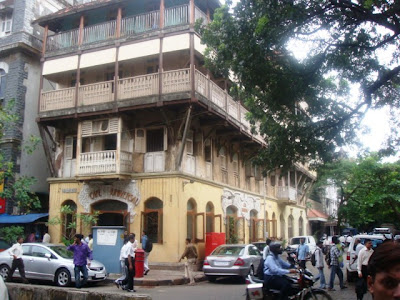 We met our landlord (Ll) and real estate agent (A) this morning. Both Goans. It was that time of the year. The bane of every tenant's life. This is how the conversation went.

LL: I just went to Goa. Had some very bad chili fry there. It's too crowded right now. My co passenger paid Rs 24,000 for his flight ticket
A: It is so difficult to get good chili fry
The wife: Martin's is good for Goan
LL &amp A: big smile
Me: I like Snow Flake too
LL: But how did you find the service? Last time I went it was in shambles
Me: Well, it seemed like some-one's house. Quiet and empty.
LL: Exactly. The emptiness put me off. D'Sousa used to be good
The Wife: D'sousaaaaaa! my dad used to eat there before he was married. I thought he had got the name wrong as I never saw it myself
LL: City Kitchen was good too
Me: I went there the other day. It has closed down
LL: Yes, the owner is a stupid woman. She apparently closed the place down for renovation..told the workers who had worked there for 35 years that she would call them when done...sold the place off...and didn't pay them
LL & A sighed
The Wife: we love the steak and onion fry at Martins
A: (smiling again) My wife and I book nine steaks when we go there as they get over
LL: And the place has remained the same. The owner is crashed out. His father used to sit there before. Same spot. With a glass of country liquor
A: You don't get good steaks anywhere. At the most, that Gondola place near your house. Kobes
LL: Kobes is all crap, bullshit and hype
Me: Mondegar's has good steaks
A (much to my surprise) Where is Mondegars? New place?
Me: Mondy's is a classic
A: Now where is this Mondy's
LL: It is the same. Short form. It is in the first lane after Regal
A: The Baghdadi lane?
LL: No. No the one before
A: (suddenly)....er, I think this way we will only talk of food

And then our discussions of commerce began. I got a call from the A later in the afternoon

A: Kalyan, sorry to call you. This is not about the rent. Where is this place Mondegars again?

Well, welcome to my world.

(A lot of the restaurant gossip above would be hearsay and probably not all true...so no defamation suits please. The gossip here is not that of the blogger's.)

So we strolled into a place called  Universal Cafe   An old building from the British era. Stained glass windows which proclaimed that it was established in 1921. The place looked smart and well maintained. High ceilings. Creaking fans. Irani Cafe tables. Wooden sofa/ bench booths. Smartly painted. Aged yet graceful like the late Maharani Gayatri Devi.

The air was languorous, lazy. Execs in white shirts, ties and trousers, young couples taking a break from work... pitchers of beer. Not the sort of place to walk into if you have to get back to fill in hours in your time sheet.

It was an Irani restaurant. The menu ranged from steaks to OMG ('world's' biggest burger'), Chinese, Dhansak and a couple of Irani dishes that I had never heard of. I didn't feel like experimenting. So we went for Chinese.

'Beef chilly fry' said my lunch mate. This is the landmark dish of Leopold's. Seemed like blasphemy to order it here. The beef chilli turned out to be quite different at Universal. I think that don't approve of cow slaughter at Leo's and don't encourage eating beef. The beef chili is inedible at Leopolds. Yet it holds you in its spell. You order it though you know it won't be good ... and then curse it.

The beef chilly at Cafe Universal on the other hand was well flavoured and suitably tender...edible of course, made you happy and satisfied, like, er, a cow chewing cud.

For the mains we went for pepper prawns. Guided by our knowledgeable waiter. Spicy. Juicy. Hot. China meets Yana Gupta. The mixed fried rice was well flavoured, had a good mouth feel. As my lunch mate said, "Don't know if its the beer but I am actually beginning to like the rice too".

Cafe Universal is now synonymous with lazy afternoons in my mind. This was a place where time had fallen asleep. And urged you to doze too.

And here's Kurush Dalal on the Finely Chopped Facebook page on the history of Cafe Universal: 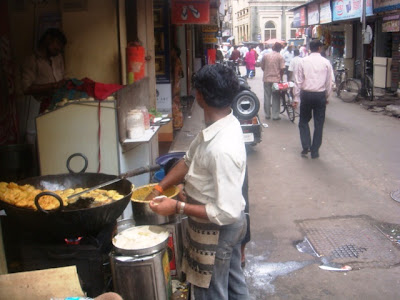 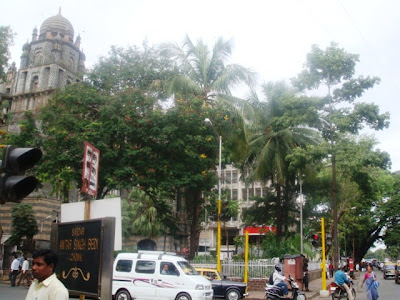 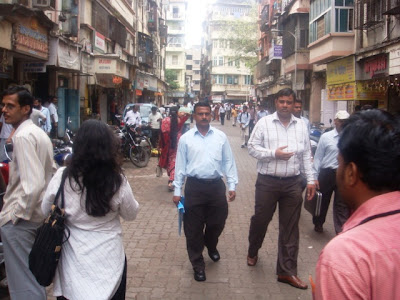 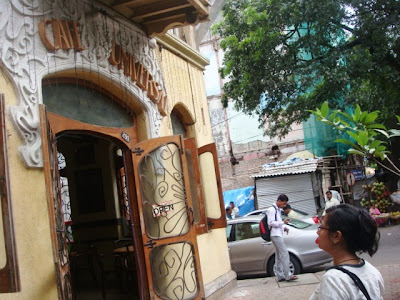 hamaarethoughts.com said…
nice..all good stuff to eat!! But seriously kalyan u still look fit..
I mean its scary to look at this fried stuff...but ur doin good dude!!how many hrs of workout??
best of luck tc!
28 November 2010 at 04:07

Unknown said…
Hey Knife:
the photos are really nice. The entrance door of Cafe Universal look very Art Nouveau and remind me of the work of the architect Victor Horta in Brussels. Check out his stuff. Its great that you are documenting these gems in the city. Also the post made me very hungry.
28 November 2010 at 12:09

Kalyan Karmakar said…
Thanks Harman: loose tees, trich photography, height :) ... well I do go to the gym at least four times a weak and do a moderate 45 min work out

Anonymous said…
Dear Kurush,
You know me, ABHAY K. SINGH teaching in The Deptt of Ancient History and Culture at Rohilkhand University, BAREILLY. I have a lot to discuss with you about Iran and Irani food of course. Sadly, i have no contact with you. Please drop me a line at
abhay1996@yahoo.com
It is important to be back in communication
Your friend
Abhay
10 July 2011 at 18:55