Waking up to smell the waffles .... Just Around The Corner, Bandra 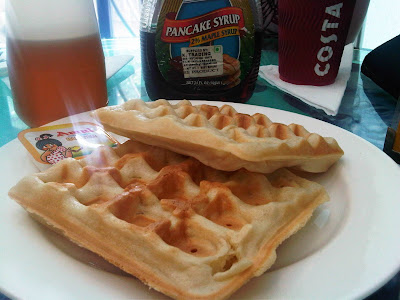 Coffee and waffles at Just Around the Corner used to be weekend staple for us.

Then the indifferent service and the birth of the new Candies near our house put paid to our trips to JATC. K missed her waffles. In the feather weight class, she could. Didn't fit in with my faux health consciousness though. So the mutton puffs, mayo and cheese sandwiches of petite four of Candies became soul food for me.

We went to JATC after ages yesterday. We were looking for a place which served coffee, had good food AND a wash room. Suddenly remembered JATC. Thought would give it a try for old time's sake.

K was thrilled to see that the waffle machine was there. Last time I went to JATC they told me that they had stopped making waffles as the machine had conked off. Plus it was past noon and JATC stops serving breakfast after a point.

"I want one waffle. I want waffle," went the Missus. I was a bit flustered by her manic chants and looked for something for myself. I settled on an alu paratha. And then I remembered, we used to share a plate of waffles in our JATC Wonder Years. It was two to a plate after all. Except that the hysteric, 'I want one waffle', chants had distracted me. Seemed like I had over ordered.

The alu paratha was ready first. It looked hot and steaming and fresh. I took a bite. Passionate stuff. Fresh, bursting with flavours, hot, felt good in the tummy. K said she'd skip the paratha. I told her to try a bite as it was pretty good. Well, it was pretty good and the 'one bite' turned to many and I didn't have to worry about over eating.

Coffee came next. JATC used to serve their own coffee earlier. Then Coffee Day which had a section outside. Now it was Costa. The Costa cappuccinos were robust and masculine as always. A tad under- heated. A blast of steam in the cappuccino machine and we were good.

The waffles arrived. Twenty minutes later as they told us in the beginning. I like my waffles crisp. K likes them soft. She had requested them to keep it soft. The waffles we got were sheer perfection in K's world. Soft and formed perfectly. And yet firm enough to not put me off.

The sight of butter melting on the waffle. The sweetness of honey smearing across the sharp salty cut of butter is the stuff the nicest of dreams are made of. To be savoured as long as you can.

A breakfast which made K update her facebook status thus: "I can walk to a place where butter melts on hot waffles and coffee shops know my name. That's why I live in Bandra."

but what i dont get is how can you guys actually find the energy to look fresh and actually step out for breakfast on a day off.
28 November 2010 at 16:00

Kalyan Karmakar said…
@Deeba: Loved the fact that they made waffles on the street at Berne (fantastic with Moven Pic) and even the Far East

@Pinku, we had to get up for a rent increase meeting before that...needed some sweet succour after that

@Moonshine: I always feel like eating alu paratha. Specially the ones my granny and my PG aunty would make
28 November 2010 at 21:37

I feel awful for not doing justice to my waffle maker.. I must have used it twice in three years! Your post is instigating me to pull it out.
28 November 2010 at 23:25

Scarlett said…
I'm slightly more biased towards pancakes (American style) vis-a-vis waffles. But waffles will do to! Parathas, idlis, dosas, pohas, upmas of the world don't even compare to pancake/waffles!!
29 November 2010 at 14:31

Kalyan Karmakar said…
Scarlett...used to feel that way about indian snacks when I'd moved into Mumbai and they were on offer at my PG. I'd eat jam and bread. Miss them now
29 November 2010 at 23:15