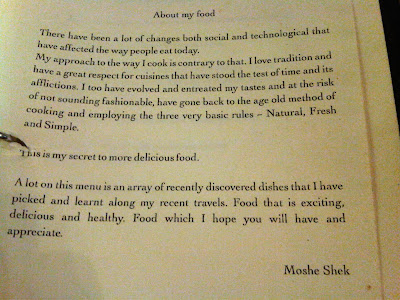 Trivia: I had to depend on my mobile camera on my last visit to Moshe's at Cuffe Parade. History repeated itself at Moshe's Bandra

It's been a while since I have actively sought out a new restaurant. The honest, old school eateries at Fort and Colaba have been such a wonderful ride that it is difficutl for me to get excited about any new place.

Moshe's is different. This restaurant belonging to Jewish Chef Moshe Shek, is a bit of a modern Mumbai institution after all. And it has finally opened at Bandra. The original's at Cuffe Parade. I went there once with K a while back.

We made sudden plans to go to Moshe's at Bandra this Saturday. I was a bit apprehensive given the stories that I heard of the long queues there on Twitter. We called at 1.30 PM and luckily got a reservation at 2.30.

We got into the tiny lift and went to the restaurant which is at the floor above Nature's Basket at Hill Road. Now there are various things which you look for when you walk into a restaurant. It's not just about food. How you feel is a big part of it and the decor at Moshe's makes you feel pretty good. High ceilings, airy...very non burby. Aesthetically done with nice lamps, stained glass, interesting mirrors... a sense of decor which stretched right up to the loo. It had a nice Mediterranean touch to it.

Another thing which I look for in a restaurant is competent service which to me means a waiter who knows his menu. I always get that in the humble eateries of Fort. Never in new fangled places though. The former has the advantage of staff who have worked there for ages. I must say that the young man who took our order at Moshe's was quite efficient and answered our questions on the menu to our satisfaction.

The food hit some pretty high notes and was fairly mortal at times. We started with a mezze platter and chose four mezzes. The labneh (hung yogurt) was stiff, sharp, tantalising. There were some cubed potatoes, perfectly baked, the ladies felt that the Spanish sauce didn't add much to it. I liked it though. I thought that the sauce brought the potatoes alive. We chose the mumarrah...chopped nuts with a bit of tomato and onions. Again tasted pretty good though only in small measures I realised as I took a whole tub home. Thesmoked eggplant mezze was quite a treat too...very poetic...even K who is not too much a brinjal lover fell for it. The memories of it make my mouth water even as I write it. These nomads sure knew how to eat well.

I didn't want to go for the usual Italian stuff at Moshe's so I opted for slightly Mediterranean stuff for the mains. We started with prawns charmoula. Skewered prawns slathered in a green base. The sauce had a mint-like Indian taste to it. An 'Indianness'  which I often sensed in the food at Itsanbul too. If you want to study the migration of cultures then food is a good place to start. I feel that they could have gone a bit easy on the marinade as one hardly got to taste the size zero prawns.

Char-grilled rawas followed. It was nicely plated in a crepe basket. The two ladies, K and G, approved of it. K is a fish lover of course and G has a very strong point of view on food. I am not much of a pescophylle and don't remember the taste of the dish at all. I have had better.

The flagship Philly baked cheesecake of Moshe's brought in the closing ceremony. Tiny little thing which left the three of us satiated. That's how rich and aristocratic it was. Think the seven deadly sins. Multiply them a hundred times. You have got your Moshe's baked cheesecake.

Rs 2500 odd (50 USD) for three without alcohol ... given the setting, the service, the peaceful easy feeling, culinary sparks of brilliance and overall sound food... yes, I would say its a good call. These are hard times after all. 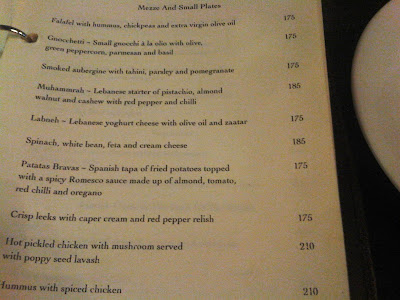 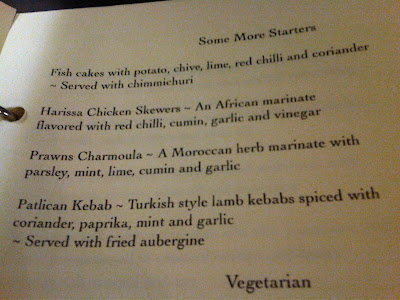 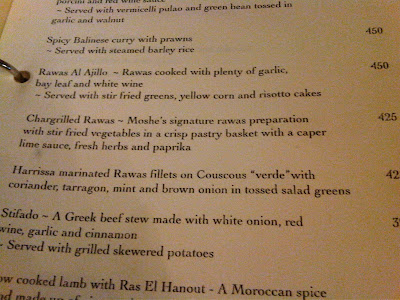 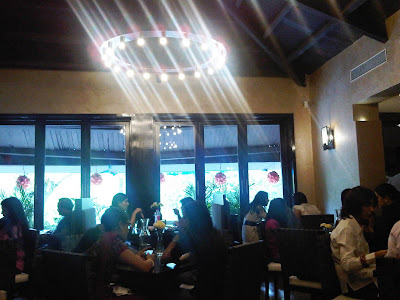 Scarlett said…
Oh man, look at that cheesecake! You're so cruel, Kalyan!!!!!

BTW, I like this man's food philosophy of 'natural, fresh & simple'. That tends to be the philosophy of a number of celebrated chefs across the world, as far as I've seen. No wonder Moshe's food is so good. I like them way better than Basilico BTW. Basilico is just over-hyped & wannabe.
10 December 2010 at 12:52

Sassy Fork said…
Hmmn...sounds delicious...good that u tried some unusual stuff
I believe they sell their own jams.
10 December 2010 at 14:52