A walk in the clouds... Ankur, Moti Lassi, Fort.

on December 22, 2010
Note: I wrote this post last evening when I though that Friday was our last day at Fort. Just got to know that we have got an extension till the first week of Jan. Thanks Santa :) (lots of photos so keep scrolling)

It was lunch time on Monday. The first day of the week. I got an SMS from K.

"Last week at Fort. Choose where you eat wisely"

I didn't have a plan when I went down for lunch. I thought I had eaten at most places at Fort. Should I repeat one of my favourites?

That's when I remembered Ankur. The Mangalorean restaurant that they showed on NDTV's Secret Kitchen the previous night. A rare food programmewhich went beyond Gajalee when it showed seafood joints at Mumbai . A little asking around on Twitter and Puja Dhingra of Le 15 Pattiserie told me that Ankur was at Fort and that it was one of her favourite restaurants.

I thought of heading towards Ankur.  I embarked on a hunt reminiscent of my early days at Fort. All I had to go by was that 'it was close to Apoorva'.

Well, it wasn't. Some people I asked said it was towards the Stock Market. That seemed far. But the weather was perfect to check this out. I asked the folks at Yazdani. They knew of Apoorva, Mahesh. But not Ankur. In desperation I tweeted and immediately got directions. I headed down directed by tweets and by a pakorawallah and suddenly stumbled upon Ankur. Did I say I love twitter?

For those interested, take a right from the Bombay Store Building at Fort. Cross Mahesh, not Apoorva, head past Yazadani, cross the Akberally road and the Church over the and then take a natural right. You'll find Ankur.
﻿
﻿ 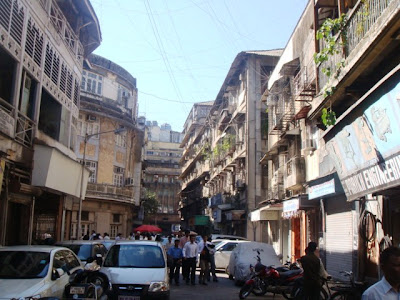 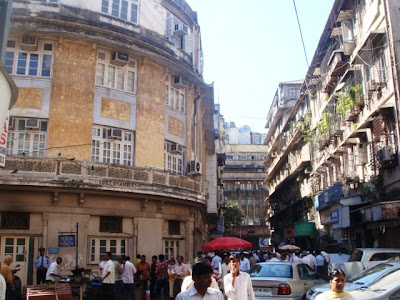 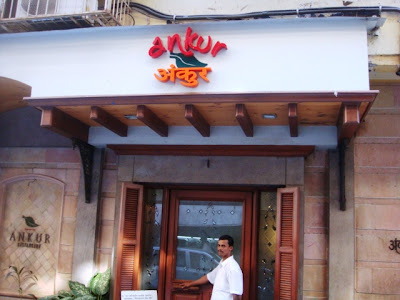 My friend and guide at Fort , Mumbai Central (on twitter), summed up Ankur as an 'expensive Apoorva' when I tweeted. Well it was grander than Mahesh and Apoorva. A tad frostier and marginally more expensive than both. A tour guide had got some foreign tourists over. It was that sort of place.

After much consultation with a senior waiter and his trainee I opted for Prawn Karavalli. Their other suggestions were fried fish (a speciality apparently) and gassi (which I earlier had at Apoorva).

I am glad that I ordered the Karavalli. The curry smelt divine the moment they placed it on the table. It tasted tangy and sharp. Exactly as it smelt. The sourness gave into a lightly woody bite ending with an unusually pleasant bitter note of fried curry leaves. Went very well with neer dosas.

I am not much of a curry person but I lapped up the entire bowl of Karavalli curry. That's how good it was. And this is very rare. On asking, the senior waiter told me that unlike gassi, karavalli didn't have coconut in it. It was made with tamarind, coriander, black pepper, chillies and curry leaves. He insisted that there were NO mustard seeds in it. When I pointed out black specks, he said that they were specks of dried tamarind.

He told me that Ankur was a fifty year old restaurant. That it started as a vegetarian restaurant. Was owned by the same gentleman who started Apoorva apparently. Better sense finally prevailed and it became a fish place fifteen years back.

How were the prawns? Overcooked. Possibly not too fresh. And overpowered by the curry. The crime which most Mangalorean and Gomantak places commit.

But the Karavalli curry? One of the unforgettables of Fort.

@Finelychopped it's the same lane as Military Cafe, if you know where that is. It's a more expensive version of apoorva.

@Finelychopped we've been to most restaurants at fort, I have only one Ankur in my database... ;)
»

@Finelychopped i hope thats the same ANKUR rest your looking for !!
»

@Finelychopped ankur is one of my favourite restaurants in the city! U must try it!!! 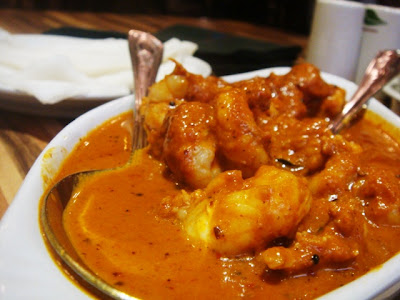 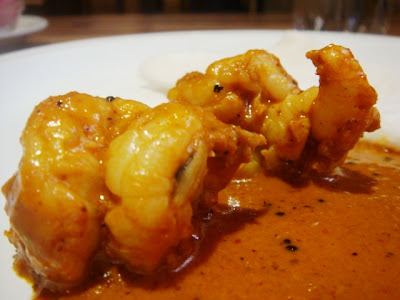 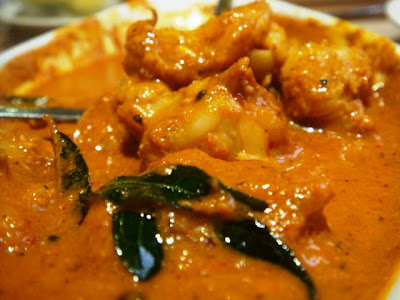 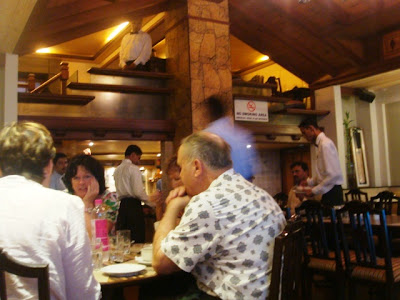 I stopped at Moti Halwai on the way back. The sweets at counter looked tired. Meals inside seemed to be vegetarian thalis. What caught my eyes were the lassis outside.

I was in two minds about the lassi. I had a sore throat. The cold sour curd based drink didn't seem to be a good idea. Then I said what the hell and picked up one.

Madhukar, the Maharashtrian lassi maker, in this 56 year old Punjabi restaurant poured out a lassi for me. Each sip was Ambrosial in the truest sense. Rich. Sweet. Warm. Soothing. Nourishing. A granny of a drink. A hefty chunk of malai or butter bobbing on the surface, added in at the end. Most were fishing it out with a spoon and happily munching on it. I took a few tentative bites. It had a slight salty taste which countered the taste of the lassi.

Madhukar, who posed for me, explained that the difference between the 18 Rs (1/2 USD) plain and 30 Rs (3/4 USD) Special lassi was that the latter didn't have any water in it. And had some nuts on top. 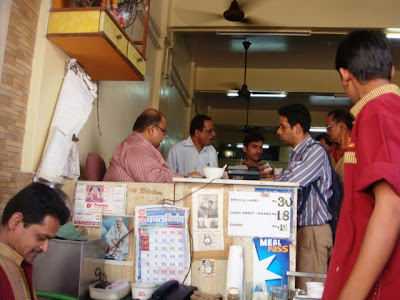 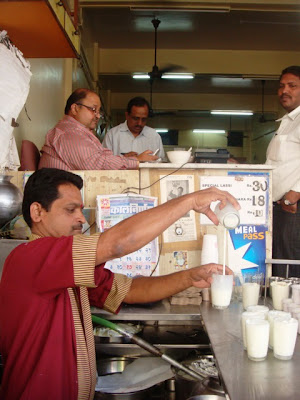 And so I ambled back past Fort House and its magical gate, HSBC, the Church, Yazdani, past Mahesh...to Laxmi Building. A lesson in architecture, some great food, friendly faces, a walk, all packed in in less than an hour as I counted my last few hours at this enchanted world of Fort. 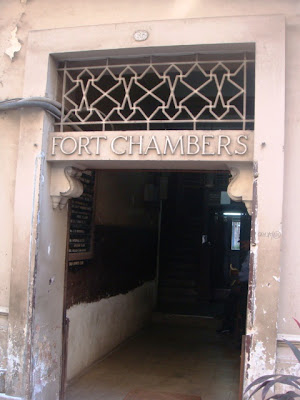 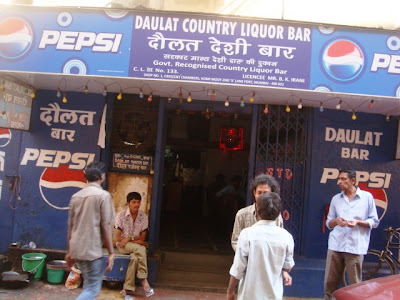 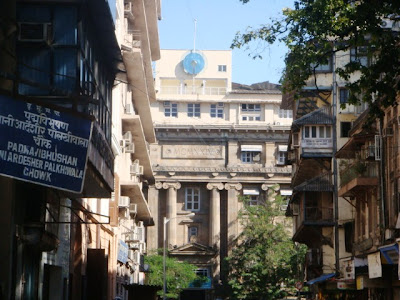 soulsearchingdays said…
hi, The lassi looks so yum and yes your photographs of the lassi are 'proudworthy'!!
23 December 2010 at 10:44

Kalyan Karmakar said…
@Sassy Fork...well actually she did mention the lovely food at Fort the other day

Pinku said…
I am not a lassi person at all...but ur pic tempted me too...thats how good it was.

Ashish said…
Hey knife tht was a lovly review of good ole fort. hav u tried paradise at the causeway?
25 December 2010 at 18:24

Kalyan Karmakar said…
@Pinku, yes, you now what it means to me