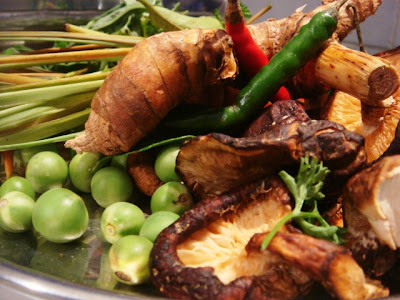 It's been almost a week since I lost wrote. That's not happened in a while. But my much sobbed about relocation from Fort happened. I now work in the dust bowls of suburban Mumbai. The Knife has lost his Mojo. The only notable food event this week was our friend's wedding. But then you have eaten at one good Parsi or Bawa wedding and you have more or less covered it all.

So here's finally a post. Even if it's about something I cooked last year. On new year's eve. 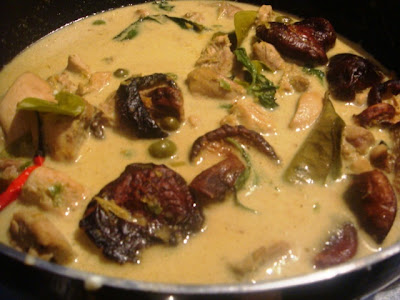 I dipped into Simon Majumdar's Eat My Globe once again last night. Read the chapters on Sydney, Melbourne and Hong Kong. Food blogger turned published author turned TV celebrity and yet he earnestly answers my mails to him. Perhaps I should learn from him and shouldn't be so constipated about adding people as 'friends' on Facebook.

I opened the chapter on Bangkok and Thailand. Simon wrote about how he was awed by the curries there which were so different from 'the goop' he apparently got at London in the name of Thai curries.

Well, it's pretty much the same here at Mumbai. You get Thai food in a number of restaurants here. Most get the curries wrong. I could say this with reasonable authority after I went to Thailand way back in 2005. I'd gone there in '78 too but wasn't a food blogger then. I went to Thailand again in 2010 and hopped over to Chiang Mai after Bangkok. I had a number of Thai curries there. Attended a cooking class at the Asia Scenic Cooking School at Thailand. Learnt to cook curries too.

The trip confirmed my belief on what is wrong with most Thai curries in Mumbai.

Well let's take green curries. The colour of the curry is pale green and not bright fluorescent green. There are no carrots in Thai curries. Nor broccoli. Thai curries are seasoned with fish sauce. I doubt if most of the restaurants here do that. And the consistency of the curry is a lot thinner than what we get here. Interestingly, the only difference between red and green curry is that mix of the former uses red chillies while the latter uses green. I made a red curry at the cooking class as we find it difficult to get a good red curry at Mumbai. Thai Pavilion, Thai Baan and Candies at least get the green curry right to varying degrees.

I made the green curry base up this time. Used natural ingredients the way they showed us in the cooking class. The way our grannies once cooked. I'd picked up a mortar and pestle from Chiang Mai and used that. You could use a mixer grinder too. The fragrance of raw spices and herbs were maddeningly nostalgic. Redolent of a golden era. The best thing is that I got every single ingredient at Bandra's Pali Market at Mumbai. Next lane to where we live. So nothing, barring the fish sauce that was imported, or increased the carbon footprint. The only thing that I didn't get were the golf ball sized light green coloured egg plants that they used at Chiang Mai. Still I am pretty sure that a Thai grandmom would have approved of the curry that I cooked.

So here's the recipe for Thai green curry. Not mine really. It's from the Asia Scenic School. 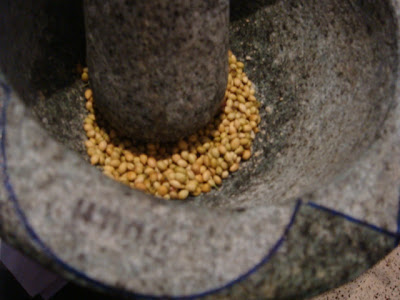 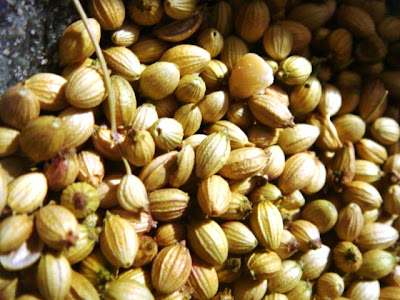 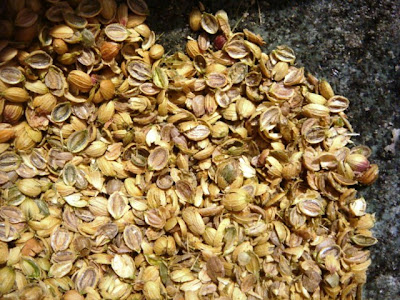 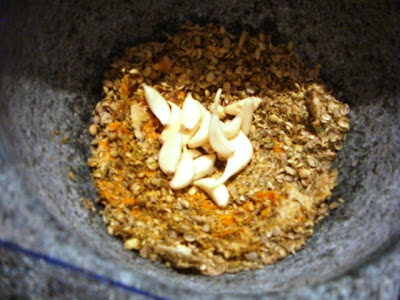 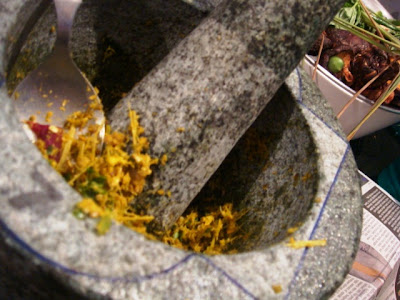 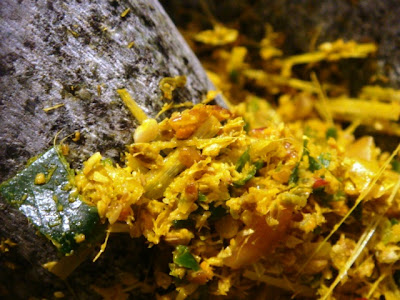 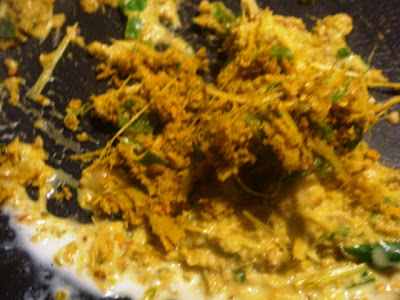 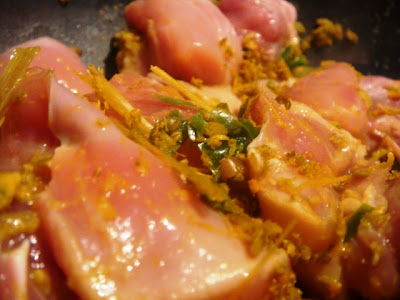 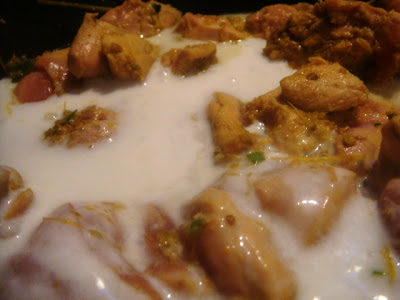 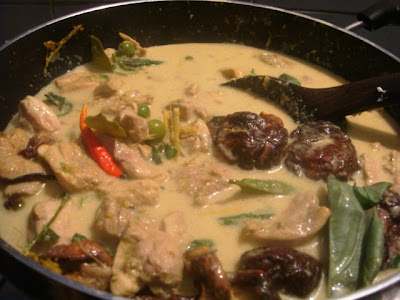 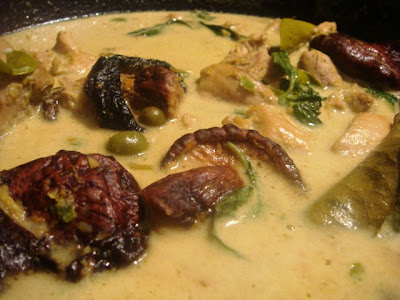 Now there's one more thing that I picked up at Chiang Mai. The way they served a crunchy bean sprouts side with curries and soups. A fantastic combination of textures with noodles or rice forming the third element. I didn't have the recipe for this. But I made a sprouts mix on the side which tasted of Chaing Mai and enthralled all those who tried it. It's pretty simple really 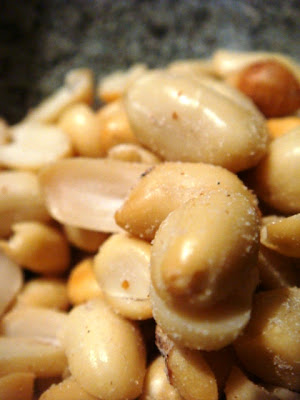 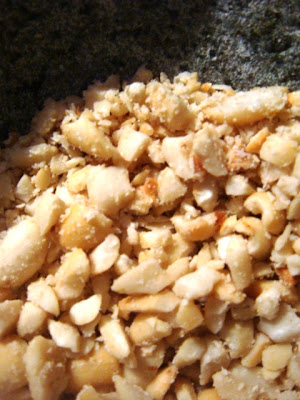 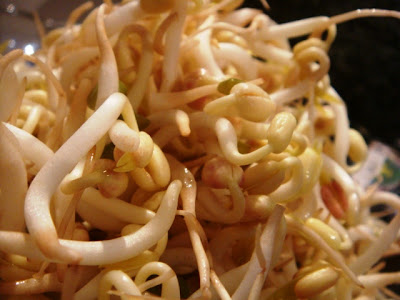 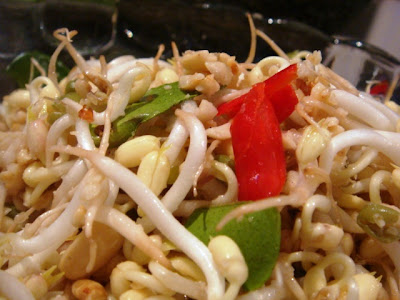 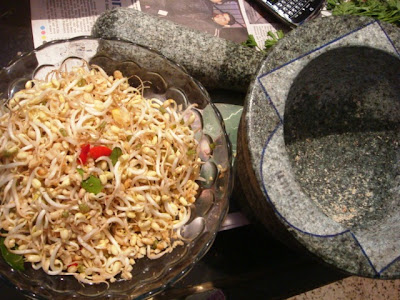 So how was your week in food?
I love Bandra Oriental Recipes

Sharmila said…
Sounds and looks yum. I've been making a lot of stews with coconut milk this winter (about to post one) but I do like the spices mixed with coconut milk in Thai dishes. The salad is great. :-)
15 January 2011 at 09:21

Shobita K said…
One more lovely, lovingly prepared dish, Kalyan! The curry looks yum but for some reason what really got me drooling was the salad. Have to try this combination if I manage to find all the ingredients.
By the way what are those round grape like things in the first picture? I think I saw them in the picture of the finished curry too.
And come on your mojo isn't lost, you haven't even misplaced it. You just feel like you have. Mumbai is full of lovely places to eat even in the dust bowls. Some may say especially in the dust bowls. You'll happen upon a few of those and then a few more and all will be right again. Occasional interspersed visits to the haloed Fort area and it'll be sone pe suhaaga.
Come on Mr Knife am I right. OR AM I RIGHT! :-)

@Shobita, hey that's sweet of you though right now I am not really convinced. Driven by the paint fumes I went down the other days and was shrouded by a haze of dust. Finally a spotted a vada pao stall. And three garbage trucks by it. But your confidence is reassuring :)

Those round grape like things are Thai Brinjals. Spicy as hell. The Thais use it more for garnishing from I understand.

Scarlett said…
The Knife has got his Mojo back!! Your green curry looks yummy...and what makes it more exciting is the fact that it's made from scratch. Total yumminess.
17 January 2011 at 12:22

Miri said…
That is one good looking curry - and yes I agree, when I ate Thai food in Singpore last year, I realised that what we are served here in the name of Thai food is a travesty! :(
18 January 2011 at 11:46

spiceandmore said…
Impressive looking curry paste Kalyan. And good use of that mortar and pestle too!
Sounds like the move from Fort is as traumatic as expected. I hope it improves. If anyone can hunt out good little eateries in hidden laneways, it would be you. Take it on as a challenge...!!
20 January 2011 at 04:15

lesley said…
I love your recipes and blog. Your pictures are really good as well and make me want to start cooking.
23 January 2011 at 15:12