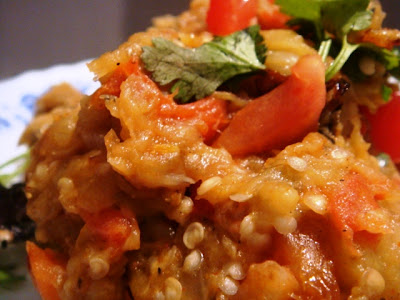 "So what are you making for dinner tonight?"


"No, this is not like baigan ka bharta. it is not a liquidy over spice goop. This is delicately spiced, smoked and you will be able to taste the baigan (egg plant). It's like a baba ganoush. Served warm though"


At the end of dinner:


"You are right. This is not baigan ka bharta. It tastes out of the world"


It had been ages since I made begun pora (literally 'burnt brinjal'), the Bengali smoked brinjal dish. In fact I doubt if I had made it ever since we moved into our current apartment. I suddenly remembered it the other night when I was editing the note which my mom has written on our years at Iran in the end seventies. There she had mentioned a 'baigan ka bharta' like dish while describing the food at Iran. I suspect that she was talking of baba ganoush. The Mediterranean Arabian dish of similar lineage.

Baigan ka bharta is a more Punjabi or North Indian form of the dish. The only place whose baigan ka bharta I have eaten is that from Khaane Khaas at Bandra. Kaianaz likes that quite a bit. I don't. I find the consistency too liquidy with the seeds of the egg plant sticking out like the scales of a Martian. Plus I find it too spicy. The over powering taste of garam masala kills the dish for me. Aubergines or brinjals, in my world, should be treated delicately. Now, the only problem is that I don't know whether this is how baigan ka bharta is meant to be. Or whether this is Khaane Khaas's take on the dish.

Begun pora was a fairly regular dish at our dinner table while I was growing up. You would smoke it on an open flame and then mildly saute it with some spices. We used to eat it with rotis. The authentic Bengali Begun Pora would be seasoned with mustard oil. We didn't use mustard oil in our house. I don't like it. Never did. I never took the recipe from my mom. But the begun poras that I havee made do bring back the taste of the begun poras that I grew up on.

Purists might argue that my mustard oil sans begun pora is as 'authentic' as an olive oil biriyani but still, here's the recipe: 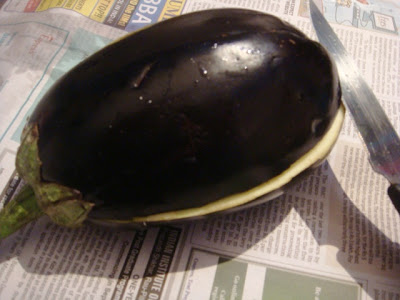 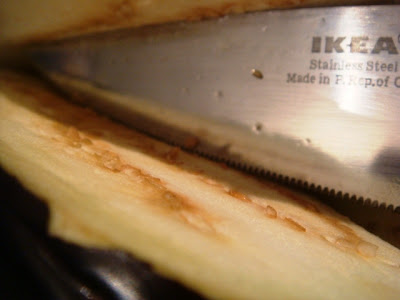 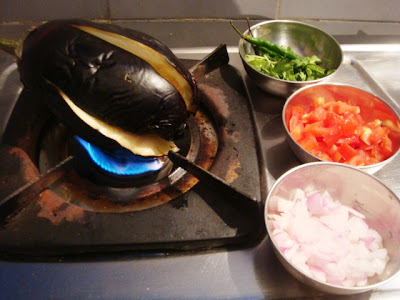 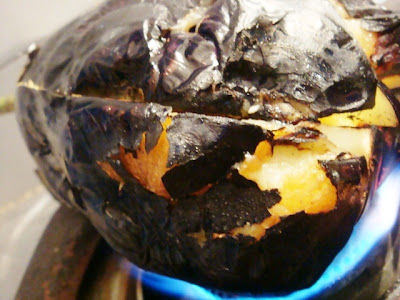 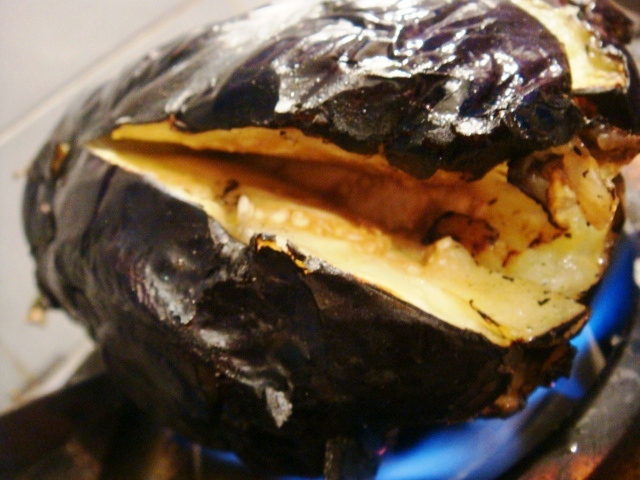 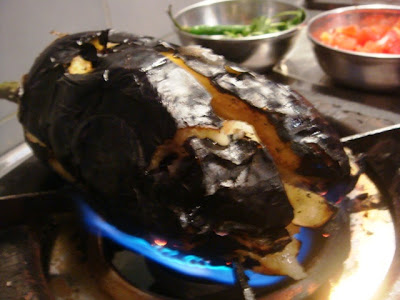 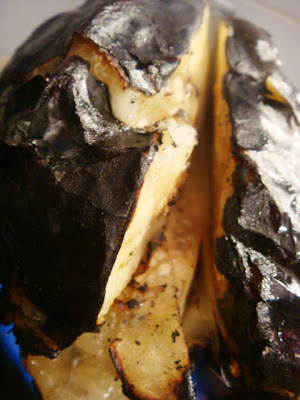 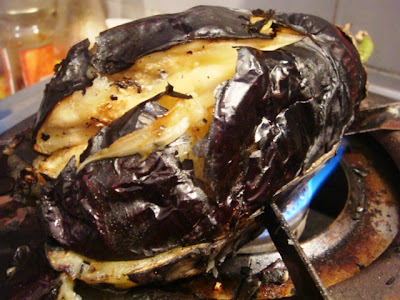 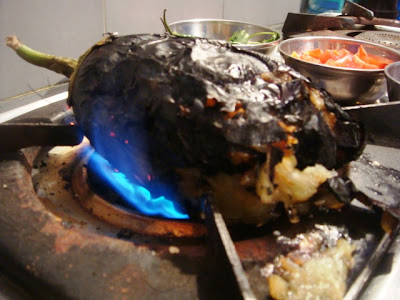 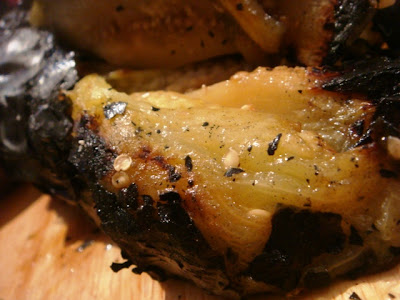 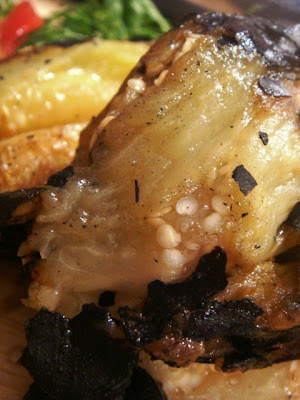 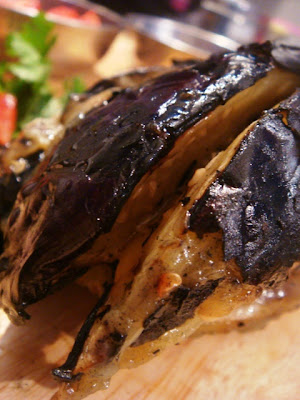 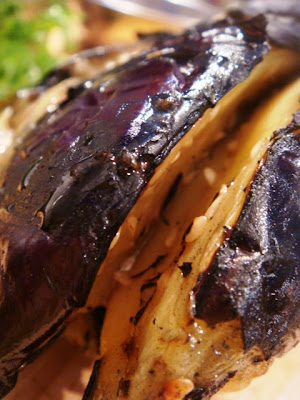 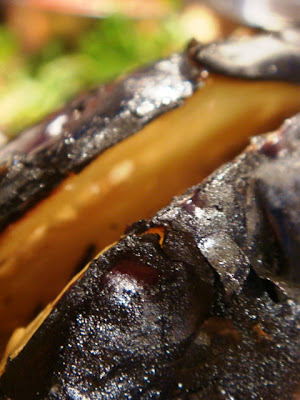 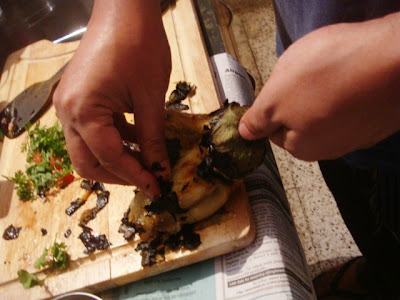 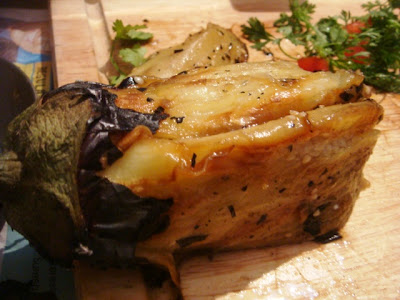 Cook: Stage 2: Spicing it up 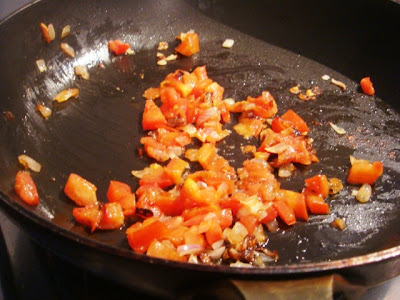 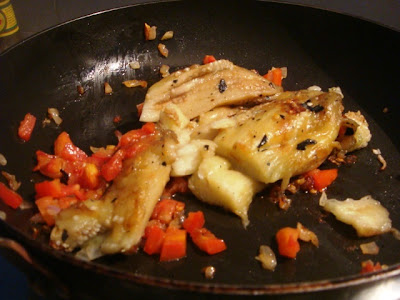 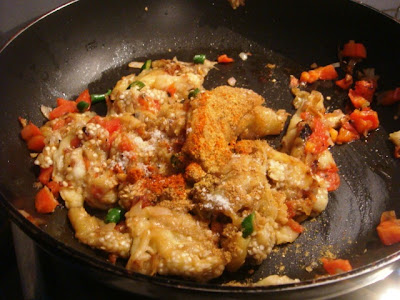 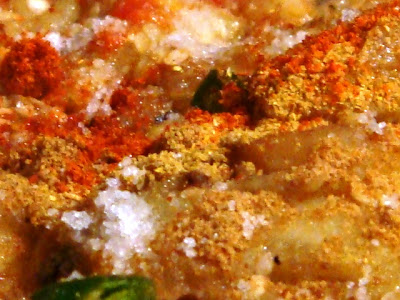 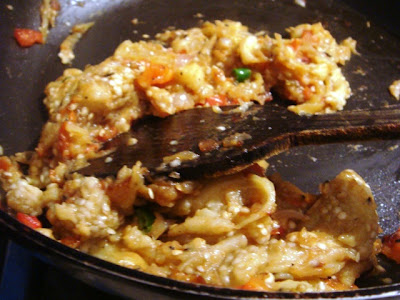 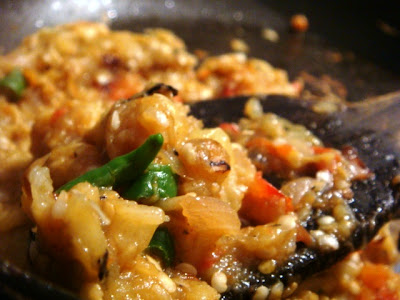 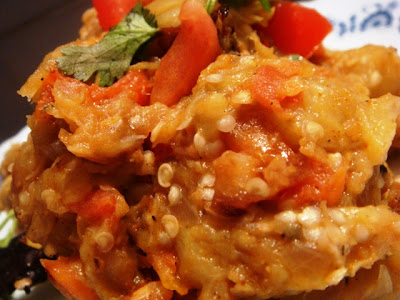 Try it and let me know if you think that begun pora is baigan ka bharta. 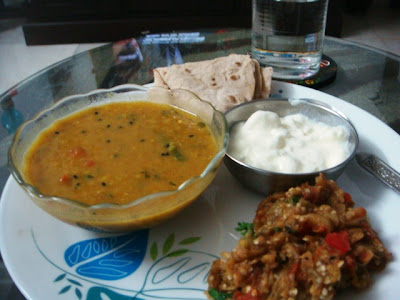 In my opinion begun pora is to baigan ka bharta what the Bengali 'Mahanayak' (film hero) Uttam Kumar was to Pubjab Da Puttar and rather macho film hero, Dharmendra.

hamaarethoughts.com said…
nice..I like baigan pora,baigan da baharta..its awesome!!
try it with tandoori roti and raita!
thanks for sharing!
19 January 2011 at 03:59

Gastronomist said…
I think it is the same. I haven't eaten Baingan Ka Bharta in a restaurant but what we make at home is pretty much the same only difference being that we add julienned ginger.
19 January 2011 at 09:02

Scarlett said…
Kalyan, this is indeed baingan ka bharta. This is how my mom makes it as well, except I don't think she adds cumin & coriander powders. She puts onions, garlic, green chillies & tomatoes, and garnishes with coriander leaves.

BTW, in one of the episodes of Take Home Chef Curtis Stone served baingan ka bharta along with bite-sized pieces of pita bread, as a starter. Except he made it the Mediterranean way, so it had olive oil. He first smoked the brinjal on a gas top, then put it in the oven along with a generous drizzle of olive oil & a whole garlic. And then seasoned it. Seemed like it would taste heavenly, though I suspect that may have been partly b/c of Curtis Stone :D
19 January 2011 at 12:07

jjs said…
I only make it a bit different, as I make smaller slits with green chillies and garlic stuffed inside. In delhi baigan ka bharta is easily available in dhabas and veg eating places, but the same are very spicy. In north indian homes the usage of tomato is more and they use a lot of garam masala which I don't. Once I had a baigan ka bharta who had used peas.I liked it and I make begun pora with matar shuti, except in my home pora is only allowed on monday, tuesday and saturday and as saturday is no onion no garlic, so begun pora only on 2 days.
19 January 2011 at 15:03

Unknown said…
Nice! I like the comparison between Uttam K and Daddy Deol. But Kalyan, the little I know about Begun Pora is that its not cooked after its fire roasted. You add the onions, green chilies, fresh coriander and mustard oil in the raw. Else, it becomes baingan ka bharta. My Mum also adds baby green peas to the tatka begun pora sometimes. And I still use mustard oil to zing it up. Begun Pora and Ruti for us is manna from heaven.
19 January 2011 at 18:10

deseng said…
We make it with raw onions only. And mustard oil of course.

Unknown said…
Lovely pics, Kalyan. The picture of the finished dish is very yummy and inviting. I've had baingan ka bharta once or twice in restaurants here but I didn't care for them. I make a brinjal dish using all the same ingredients minus the smoking part. I think I'll have to make it this way soon.
And nice job comparing two such handsome guys to brinjal dishes! :-bd :D

Kankana said…
Begun Pora is my fav bengali dish and i can't make it that way any more .. because .. because now i stay in US with my husband and this city doesn't have flame gas in our apartment .. or most apartment out here .. we have to depend on heat coil .. hence i bake it in oven and make baigan ka bharta ( minus the smoke ) !!
I am new blogger and came across your as I was hoping around .. I will learn a lot from here :)
20 January 2011 at 06:36

Pia said…
its a bangali version of baigan bharta. Loved it

Kalyan Karmakar said…
Well it seems like my begun pora is the way North Indian mothers make their baigan ka bharta :) Which probably explains what you said Pree on the real Bengali way

@Harman...I nice hot tandoori roti should go well with it

@Anurag, I did think of adding fresh ginger. Should be a good touch

@Shobita, well guess there is only that much one can write about Baigan before you need to get in Bollywood and Tollywood to liven up things

@Kankana, welcome to blogging. Hope you enjoy it as much as I do :) Maybe you can take an egg plant next time you go to an American Barbecue

@Scarlett: Well I made it with Olive Oil too. Your pick ;)

@jjs thanks for sharing, I'll try garlic the next time

@deseng, well that seems to be closer to the Bengali version that Pree speaks of

Sunshinemom said…
Well, this is my baingan bharta definitely! Only I do not slit the baingan when I char it.
24 January 2011 at 20:34