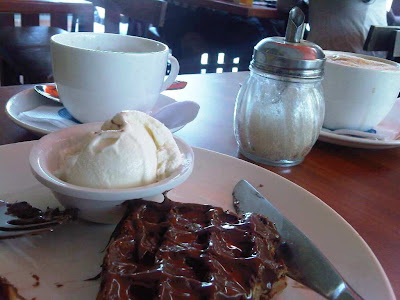 Note: I guess there would be repeat reviews in a three year old blog. I had written about Crepe Station at Bandra before. Let's say this post is a way of seeing whether things changed. Quite proud of these Blackberry photos.

I had severe dessert cravings last night. There was a nip in the air and I wanted something warm like the dense chocolate fudge cake at Moshe's or a gooey brownie or some gajar ka halwa. But then even Bandra gives up after midnight.

I woke up this morning to a tweet from @themovingcloud, a girl who gave up a job in advertising to follow her dream of wanderlust. The tweet read "Stuffed omelette, watermelon juice, nutella and banana waffle and coffee. Sunday morning. :) #food"

K and I had just sleepily got out of bed and were going to Candies as we are programmed to. But @themovingcloud's tweet had me in a spell. I decided to head for Crepe Station where I could live the dream that her tweet conjured. And yes, turned out that she did go to Crepe Station when she tweeted. As apparently did @madhumita too according to this tweet which I later read: "Hazelnut chocolate waffle at Crepe Station. More than made up for the fail brunch at eggsunday http://twitpic.com/3qiwiz""

Nowhere does the irony of Mumbai become as apparent as at Crepe Station. A hot spot, buzzing at most times, perpendicular to the sea front, al fresco seating with the sea in front of you... yet the dust, sound of constant construction, the honking of traffic drove us to the air conditioned section inside. The mosquitoes drove us out again and we joined the crowd of Sunday revellers in the open section at Crepe Station. At least it wasn't hot.

At the table across were two Bengali girls... always a sign of good food.

I meant the race before you accuse me of peddling smut. We Bengalis have a knack of seeking out good food.

It was 1 pm and ours was officially the last 'breakfast' order at Crepe Station. We started with an omelet. I am not a big fan of ordering omelets or fried eggs at restaurants. You end up paying a king's ransom for something that is unbelievably easy and cheap to make at home. Restaurant omelets tend to be under salted and are brought to your table cold. Even at five star buffets. The best place to eat omelets and the like are at carts at Railway platforms or at at anda bhurjeewallahs  (Mumbai) or deem parooti aalas (Calcutta). The omelets there are served with a lot of warmth and are to be treasured.


I felt like an omelet today. I asked for cheese and ham, which was off the menu, in the omelet. I conveniently forgot to mention "whites only". 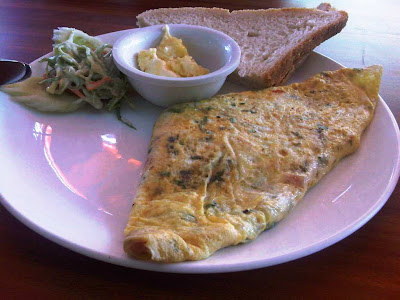 I was pleasantly surprised when they got the omelet to my table. It was hot. The salt was perfect. The omelett was soft and juicy inside with the egg and cheese blending together in conjugal harmony. The ham was understated and yet brought the morning alive. Though at, Rs 100 for a two tablespoon portion of ham, the bill  did make me sigh deeply. But then it was good stuff and even K who didn't want an omelet dug in. Again and again. Plus she footed the bill. 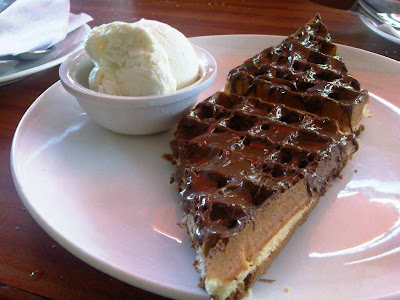 Then came the Nutella waffles which @themovingcloud made me dream off when I woke up. The waffles were doused in a very liberal coating of Nutella. Anyone who talks of raw oysters, caviar or garlic as aphrodisiacs needs to taste the Nutella coated waffles at Crepe Station. This is the stuff boy dream of. Well after they grow up. I was heart broken when the waffles got over. Then I added some of the honey from K's waffle plate to the vanilla ice cream which came with mine. I smiled again.

K, who had, once introduced me to Nutella waffles, wanted plain waffles today. Though she did dig into my Nutella waffles as well. Her waffles had honey, butter and lemon juice on the side. She had a bite with butter and moaned with approval. She loved the consistency of the waffles. "Here you can actually taste the waffles unlike the Nutella ones where you can only taste Nutella". I had a few bites of her waffles with honey and butter. She was right. I have never had waffles with such perfect consistency. They gave in seductively with each bite. But I still don't know what's wrong with "only tasting Nutella". (I just realised how cheesy this paragraph could read to the puerile mind!).
Soon our coffee arrived and somewhere across a steaming cup of coffee and Nutella drenched waffles lay the sea. A fairly high price to pay at Rs 550 (11 USD) for breakfast for two. On the plus side there were 'half portions of waffles so we could both both have what we wanted. The food was more than good, the service prompt, the crowd pleasantly lethargic but the grimy surroundings of the street, the heat and the dust, the screeching drills, smoky cars were too close for comfort.
But then that is Mumbai. A city thriving on the 'spirit' of its people. Despite government apathy and stone age infrastructure. Wait, that's the story of India too.
PS: I picked up some gajar ka halwa today from Punjab Sweets after the gym. My exercise card said 'stretch' at the end. This would stretch my waistline. There was a wired Bengali family ahead of  me. And yes, the gajar ka halwa did turn out to be good. Remember the 'signs'? 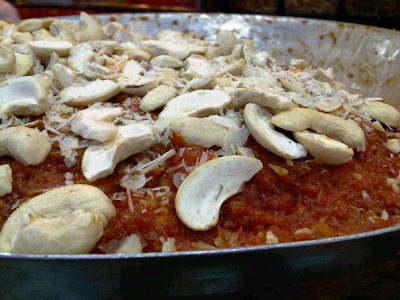 Sassy Fork said…
So glad to see you blogging again!Thoroughly enjoyed this!
17 January 2011 at 07:54

Shobita K said…
What an adventurous breakfast! Never heard of ice cream with waffles. Its like a kids dream come true. Ice cream for breakfast! Lemon juice and waffle too is a novel idea to me.
You look quite pleased in that picture. Does this mean you are beginning to come out of your funk? I hope so!
Kainaz seems completely zoned in. :-) Hi Kainaz!
The signs? I remember' The Signs' but what does M Night Shyamalan have to do with gajar ka halwa? Hahahaha...just kidding...

@Sassy Fork: well always helps to know that someone's actually waiting to read it :) Thanks for the tweet asking me to write

@Shobita, turned out that ice cream was part of the deal. And ice cream plus weekend are the best way to snap out of a funk till Monday comes at least.

Miri said…
I agree with K - waffles as they are are better than those drowned in Nutella - but I am a person who doesnt like Nutella in the first place (gasp!), so I guess there's no middle path here! :) The omelette looks very good...
18 January 2011 at 11:42

singh from domionos india said…
Its not a breakfast its a divine food,Awesome no words to say
18 January 2011 at 11:45