Breakfast in a Box...Barista, Carter Road 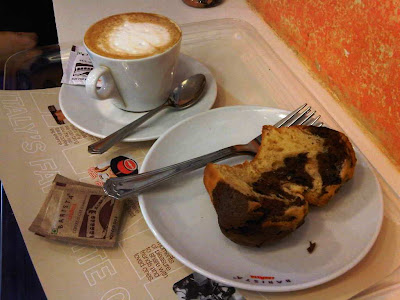 Soumik called me in the morning asking for brunch options. Given that K and I wake up at noon on weekends, breakfasts are brunches in any case for us. He was looking for dim sums but Mumbai doesn't have any exclusive dimsum joints as far as I know.

K and I went to Candies for breakfast but it was too crowded. My resolve weakened and I decided to head for Crepe Station where we had a great breakfast last Sunday. Visions of omelets and waffles were smashed as we reached Carter Road and saw that there was no Crepe Station! It was getting renovated. Will be up on its feet on Monday we were told. Must be connected to the crackdown on  Bandra restaurants with illegal extensions that I read about in the papers.

We went to Open Affair next door which advertised breakfast. There was a couple sitting there. A Caucasian girl and a local guy. They had a half eaten plate of scrambled eggs on their table. We were told that breakfast orders ended at 11 am. It was 1215 so the couple must have been nursing their scrambled eggs for long.


So we headed to the new Barista at the Carter Road Khao Gulley (Food Street). A nice cosy place. One table with two seats where there were two ladies catching up over coffee. And a corner with bar seats which is where we sat. Nice, cosy and quiet. Unless you are the third group who comes in which case you won't get a place. It was almost like being by yourself as I stretched my hands to to the counter and picked up our orders. The orange theme gave the shop a chirpy feel. The road in front gave a sense of space. The glass door and windows keeping us in a comfortable air conditioned cocoon, shielded from the dust outside. 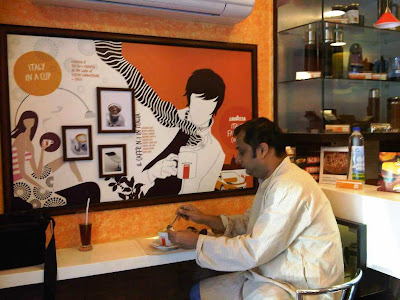 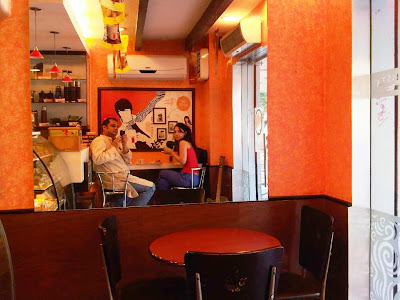 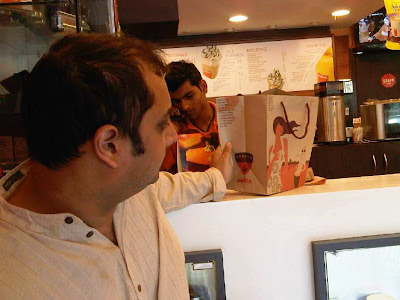 I went for a cappuccino. Lavazza brew I think. The cappuccino at Barista is one of the the best in town. It tastes of coffee to start with unlike most cappuccinos around. Is served hot, again rare. And has a good, reassuring kick.

K went for a Sugar Free Delite Ice Tea. Tasted good. She got so excited that she bought two 200 ml tetrapacks in a sugar free rush to take home. They cost Rs 89 each. I told her it would be cheaper in a regular store. She panicked them in any case. We checked the printed price later. Rs 20!

The coffee and chocolate muffin was a disaster. Couldn't break it with a spoon. Reminded me of the Pre - Indus valley civilisation brownie that I ate at the airport Coffee Day a couple of years back. This muffin was baked then too. Vintage though inedible.

K was quite happy with the mince chicken and hummus in pita that we ordered. The pita was just about ok if you ask me. The mince filling was creamy and pleasant. The hummus too subtle and understated for a hummus lover like me though. We actually had a kheema curry in the fridge at home. I told K that we could have bought bread and had a similar breakfast at home. "Spoken like a true housewife" she said. 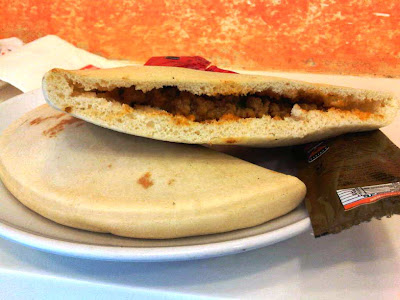 But the great cappuccino in a quiet corner, 'Far from the Madding (sic) Crowd', made it all worth it.

hamaarethoughts.com said…
nice..narration...
I know barista..its good but very expensive even in US dollars...
Cappuccino of Tim Horton's (Canadian Chain)is Awesome..Matchless ..jus for two bucks!!
try if you get!
23 January 2011 at 04:57