on January 26, 2011
A quick note on Indigo Deli at Palladium.
I had been there earlier. I had written about my inconsistent experiences during my visits to Indigo Deli. Some dishes thrilled. Others under-awed. And the chairs gave you a bad back.
Well, we went there a few nights back after watching ‘Dhobi Ghat’. An Indian film that tried hard to match up with the best of world cinema. Too hard perhaps.
Well, there was no flaw at our dinner at Indigo Deli this time. The food was uniformly brilliant. The chairs were the same but the exquisiteness of the food washed away all pain.
We ordered barbecued pork spare ribs. Extremely luscious meat in a sauce with a point of view. The sauce had a nice coarse texture and the shreds of red chili added an exciting touch. It had just the right amount of sweetness and tart to tantalise without being mushy. Each bite was followed by a nod of approval from us. It cost a bit more than Rs 400 (8 USD) but could have fed both of us. 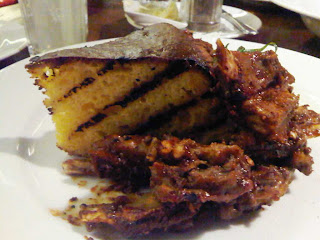 The sweetish corn bread which came with this was not too impressive. A uniquely disquieting combination of sweet and smoke.
The spaghetti in pesto that we ordered made up for the bread. We asked for mushrooms on top as chicken didn’t seem that interesting. And extra pine nuts. The pesto was refreshing and without cream as I had specified. The parmesan was understated and was a perfect foil to the zest of basil. The sauce could have been a tad stiffer and less liquidy in my opinion. We still loved it though. Including K who doesn’t like spaghetti. This, at Rs 400, was a bit too expensive if you ask me. But we had ordered off the menu and this was billed as ‘guest’s special’. 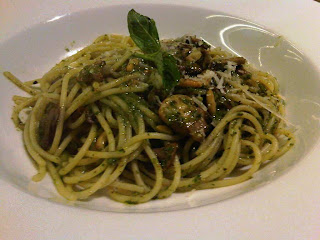 K’s dessert choice of baked chocolate brownie cheesecake couldn’t be faulted. It was dessert heaven. Warm, sensuous, seductive and with ice cream a bit too raunchy for public display.
We ate well. Definitely ‘worth repeating’ as my Mom in law would say. 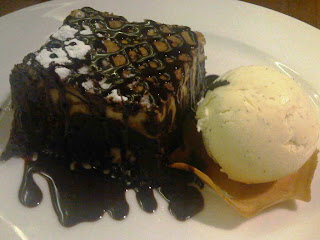 Gaurav said…
i usually end up going for ol favs... food is rarely disappointing.. service on the other hand is rarely consistent
26 January 2011 at 10:02

Unknown said…
perfectly put- trying too hard. I walked away wondering about that. If Kiran Rao was not Mrs. Khan - Im not sure. I mean its a good film and a good story. I had an incredible cinematic experience in AHmd. That film was not trying too hard. It was beautiful. perfection. slow.. but i love slow. I hope that film gets a release in India. Any how...
Prateik and Aamir were very good. Mumbai was treated - im ambivalent to its visual treatment. I shall not carry on and on abt dhobi ghat on your food blog. Later..
26 January 2011 at 12:29

Kalyan Karmakar said…
well Gaurav, the food has always been patchy in my previous trips...service better than Olive which of course is not raising the bar too high

Anonymous said…
I love Indigo Deli. High quality food with good value for food. Seriously their portions, ingredients are just superb compared to some of the pretentious restaurants floating around town.
21 February 2012 at 15:00