on January 07, 2011
Credits: Thanks to Sudeshna Banerjee of Cook Like a Bong for awakening some very sweet memories by sending me these spectacular photos

It's not easy being a fat kid. Children can be very cruel as an author once wrote. Add to that shifting countries. And cultures. It was not even Calcutta. We were in a suburb to the South of Calcutta.

A world away from England and pre Islamic Revolution Iran where I spent the first seven years of my life. To start with, there was no Coke. Or Pepsi. Or rocket lollies (ice creams).  No television. No Muppet Show. The clothes were funny compared to my fairly swish wardrobe. The food was strange. My parents had to make fish and chips, chicken and chips, spaghetti and 'Spanish Omelets' for me. No daal, rice or Bengali food for me.

Everyone would pull my cheeks. Including the mosquitoes. I learnt about power cuts or load shedding, a strange concept. The people around me seemed different. We lived in comparatively smaller towns of England and Iran before this. My parent's social circles were dominated by locals. My exposure to Indian culture had been minimal. I didn't speak Bengali when we moved to India. I picked up Farsi in Iran a lot faster.

I missed my friends, my teachers. It took time to relate to even my own family. The local kids would mock my accent which was a mix of British and Iranian. And ridicule my chubbiness. From a four feet old's point of view everything was strange - accents, languages, clothes, complexions (!). 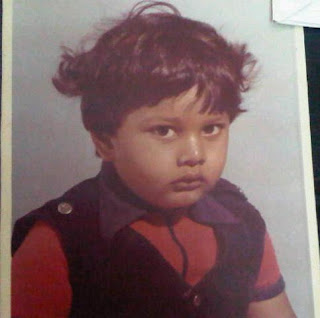 The connections one makes at that age are strange. I can never explain why I clung on to a ragged yellow blanket every night. Or the soft corner I developed for 'Joynagorer Moa'. Not in the same league as roshogollas, shondeshes, lyangchas or pantuas when it came to Bengali sweets or mishtis. Joynagorer Moas  were not 'sweets' in the truest sense. Not the usual cottage cheese or chhana based delicacies which Bengal is famous for.

'Moas' (Mow -aa-s) are rice crispies rolled into balls and held together with gur (jaggery). A popular snack in Bengal. Joynagorer moas were different from other moas. While regular moas were crisp, these were soft and as mushy as an Uttam Suchitra Bengali love story. These are, if memory serves me correct, made with gur (jaggery) from Joynogor, a suburb to the South of Calcutta. The speciality of this is that you get it only in winter. Come November and little stalls would set up in local markets selling joynagorer moa and patali gur. The latter is the most prized of Bengali jaggeries. Again a winter speciality. They would both slowly fade away as February ended bringing in Spring and Summer together.

The moa shops could be cigarette shops converted for the season. Or annexes of existing shops. You would traditionally not find Joynagorer Moa in sweet shops or 'Mishtir Dokans'. Though they did make an entry into sweets shops in the late 90s. You would normally get two varieties. Regular and Special. The latter would be slightly larger and have a couple of extra raisins on them. They would be sold in white paper boxes. If you were buying a dozen. Else in paper bags made with newspapers. They used to cost 50 and 1 Re and then 1 Re and 2 Rs before I left Calcutta in the late 90s.

Joynagorer Moas were excruciatingly sweet. Appealed to the most unspoilt of taste buds. Had a touch of nectar to them. They were soft. Virginal and cherubic.You could almost bite them and then slowly swallow them barring the odd dry rice husk. Bite into them and you could only feel love, warmth and joy around you. Simple and pure pleasures. Plump, cuddly, little bursts of joy.

Joynagorer Moas were my constant companions through winters as I grew up under some fairy dramatic changes of fortunes. Winters meant incessant sneezing, cricket matches, vacations, Christmas, New Year, my birthday, Saraswati Puja and, always in the background, were joynagorer moas.

I never went back to Calcutta in winter once I left the city. Memories of wheezing through nights of its smoky and polluted winters haunted me. I had made it a point never to go back during winter.

It's been close to twelve years since I have seen Joynagorer Moas. Or tasted them.

These excellent photographs kindly clicked and sent by Sudeshna who runs the very impressive blog, Cooks Like a Bong, brought back memories of a very dear old friend.

Anonymous said…
I wish I had a time machine to transport u back to that chubby little kid so I could kidnap u. U were so adorable!!! and still are btw.
7 January 2011 at 11:14

Jaya M said…
Well nothing can be compared with joynager'er moas Kalyan..I have been so wishing to make them in home but have no recipe so far..any help regarding this!!..and memories last forever I guess :-)..ah! thats one cute pic..Wish you and Kainaz and mashimaa a very happy new year ..
8 January 2011 at 00:29

Pinku said…
ur description of the moas and your pic as a child go so well together knife....no wonder they were ur favorites.

Btw we get some very decent joynagarer moa here in CR Park..in case u were to travel to Delhi around this time ever.
8 January 2011 at 17:00

@Jaya, thanks so much and hope you have a great new year and can crack the moa recipe too. May the year be full of sweetness