"Disclaimer: In this post I have tried to narrate the experiences that I had during the most transitional period in Iran. These views are purely mine. I was a young Indian housewife at that time. I might have misinterpreted a few of the political implications and some of the facts might have been blurred due to distance in time.  I sincerely apologize if I have hurt the feelings of anyone. " RK.

"Trips to Ramsar, the land of gold

During winter, we used to go to different tourist spots. At times with friends and at times by ourselves.

Once we visited a nearby city named Ramsar. I do not know if Ramsar had any connection with Lord Rama. But it was the most beautiful city that I had ever seen. Roads were lined on both sides by orange trees. They were not exactly oranges but something called ‘malta’ that we found in Delhi too. They were larger and more golden than regular oranges. The trees were full of ripe oranges/maltas hanging from the branches. It seemed as if we were in a city of gold with golden fruits hanging from the trees. It was the most wonderful sight that I had ever seen in my life.

I have not seen any of the seven wonders apart from the Taj Mahal. But I have drawn a list of seven most wonderful scenes that I have seen abroad and in India in my mind. Ramsar was one of them. When I am down and out and feeling low, I conjure up those beautiful scenes in my mind’s eyes as the poet William Wordworth did. They rejuvenate me and I rise like the legendary Phoenix from the ashes. 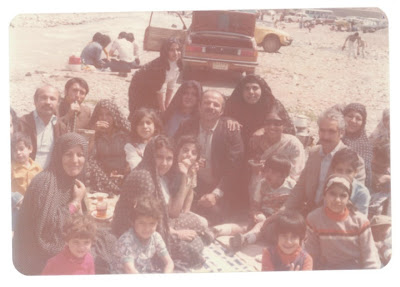 The markets of Iran…the glint of gold and fatty meat

The golden fruit of Ramsar reminded me of the gold in Iran. Ornaments there were made of 18 carat gold. There used to be a separate market for gold ornaments. A lot like the ‘Meena Bazar’. Dazzling golden ornaments of all sizes and shapes were heaped in  bowls and sold. They were kept in the open. You could easily touch the ornaments and see the designs. I often wonder about how they kept track of these.

They had exquisite craftsmanship and resembled some of the Indian ornaments. But Indians were not interested in buying them as they were made of 18 ct gold though many of the gold ornaments sold by local goldsmiths in India as 22 ct are in reality 18 /19 ct gold. But then ignorance is bliss. In the evenings, we would sometimes go to the gold market and do ‘window shopping’.

As time passed, I came to know the alleys and would sometimes go to the local markets for shopping with K. It was an open market like the ones we have at Kolkata. Vegetables were very fresh, so were the fish. There were shops selling mutton too. One funny thing was that if you bought mutton, you would compulsorily be given a lump of fat. For example, if you bought 1 kg mutton, 900 gm would be meat and 100 gm fat. Previously I would ask them to exchange the fat with mutton. But they never agreed. So I would keep it there only with a show of temper.

Later on I would bring the ‘fat’ home and then throw it away. I realized that they would, otherwise, sell the ‘fat’ to the next customer.

Iranian currency was rial. It still is. Funnily enough, I observed that there was another word in circulation in the currency market which was colloquially used but not officially recognized. That word was ‘tuman’ Ten rials were supposed to make one ‘tuman’. Ten ‘tumans’ meant 100 rials  though in the price tag it would be written 100 rials and not 10 ‘tuamans’. At that point of time, rials were exchangeable in international market too. I used to save up my household money and buy Channel 5 / Channel 19 perfume on board of international flights. 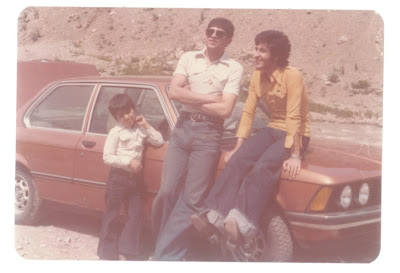 Even at that time, the Iranians knew about Hindi flims like ‘Sangam’. Any saree clad Indian woman would make them sing, ‘bol Radha bol…..’  No bad intention meant. I felt happy that they knew about Hindi cinema. All Americans and British films were dubbed in Farsi and shown in cinema halls. Once we went to see ‘Jaws’ in a hall dubbed in Farsi. The floor of the theatre was covered with the shells of the cheaper variety of nuts as Iran was a nut– eating nation. They loved to munch on nuts when they were not engaged in any serious work.

Miri said…
:) Brought back memories of my Dad's stint in Iran at about the same time - 75-77 I think...we have heard similar stories of his stay in Tehran where thet working with Swedes on a cabling project (electricity distribution) from Tata Electric Company. Playing huge jigsaw puzzles during the daily blackouts, a bullet lodging itself in the wall behind him just above his head, cooking some great meals - all men staying in some portacabins from what I can remember from the old slides we have.
26 January 2011 at 21:30

Unknown said…
I loved reading it. Fluid and somewhat poetic. Loved the imagery of the orange trees. Aunty ki ekhono Chanel No. 5 lagaye? :-)

shobita K said…
Yet another nice walk through memory lane! Wish you could have somehow captured some pictures of those orange lined roads and the bowls filled with gold jewellery, MrsK. But you still managed to fuel my imagination.
9 February 2011 at 14:47