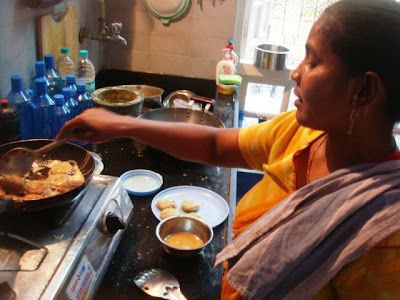 Those on the  Finely Chopped Facebook Page friends would have heard of‘Bunkin Banu’. As would people who read (‘follow’ is so egoistic) my tweets athttp://twitter.com/#%21/Finelychopped.  Those who know me in real life and live at Mumbai might have eaten her shammi kebabs. Muslin-like melt in the mouth works of art which would give the most Nawabi of Gulauti kebabs an inferiority complex. These are the kebabs that guests in my house talk about well after a three or four course dinner cooked by me. 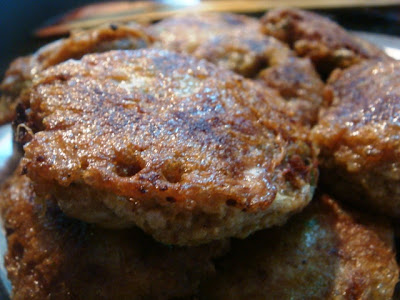 Banu came into our lives as a maid whom we inherited from the gentleman we bought our flat from. He had warned us that she bunks like mad. He was right. Many are the times that I wanted to sack her in the initial years when K stopped me. And as Banu pointed out the other day, she has been with us for eight years now. She even shifted with us when we moved houses down the lane.

I was quite pig headed about not keeping a cook in the early years of our marriage. Banu, and her predecessor Rani, would just clean and chop. I would cook. Occasionally K would. And so it went night after night for almost five years. Then I don’t know how it happened but between K, her mom and my mom’s machinations Banu started making rotis for us. And she makes excellent rotis.

Soon we increased her job description and made Banu my ‘sous chef’. I would instruct her and she would cook. She calls me every day at work and has the memory of the grasshopper. I need to repeat recipes every time. Often in the middle of meetings.  I haven’t told her that the alu khus khus that she makes is alu posto, kanda wala machhi rui kaalia, mundi wala daal machher mudo diye daal, hara moong daal the daal torka of the dhabas of Calcutta. With her repertoire of Bong dishes her market value would be pretty high.

For long we thought that Banu couldn’t cook to save her life. Then K had a brain wave and asked her to make kebabs. Muslims are supposed to be good at that. K was right. She had struck oil. For all her uneven and rough cooking skills, Banu’s kebabs like Bianca Castafiore’s emeralds were beyond compare.

Many have asked me for the recipe to Banu’s shammi kebab. So I asked her the other day. The thing about Banu is that she loves to chat. Whenever I am home and trying to write I will suddenly find Banu in the study with her litany of demands ...rice is over, dish washing soap, flour too, potatoes are over, we need a new scrub, the newspapers needs to be sold... and then assorted clutter from across the house, ‘is ko feku’ or ‘should I throw this’. I try to ignore her and type away.

That day was different. A very little prodding and I found out that Banu’s father was from Kolhapur. A place where they add crushed peanuts into every dish according to her. She however was a Mumbaikar as she proudly said. Born in Bandra. Working from the age of 13 where she babysat children for Rs 20 a month. Her father used to earn Rs 100 (2 USD) a month. Banu is close to 40 now. Grandmother of two as far as I know. Living by herself. Raising a younger son. Supporting her daughter and grandchildren. One more of those incredible women of India.

“Where did you learn to make kebabs?” I asked her. “By observing others. Learning at people’s house. Just as I learn in yours”.  She smiled as I told her about how famous and sought after her kebabs were. And then we went into a long debate about how much rice should we make for the party at night. She was right. I had over- estimated.

Banu begun making her kebabs. I clicked. She said ‘saab my pictures turn out very bad. I saw them in a CD in a wedding I went to recently’. I explained to her the difference between photos take au naturalle versus posed ones. I explained that I would put these on the Internet. That the whole world would see her.  She knows that I write. The neighbours in our earlier building had told her that as she proudly told us once.

I wish I could tell you the exact recipe for the kebabs but this is what I could figure out by talking to her and observing her. Try your luck or drop by at our place some day. We have an open kitchen. 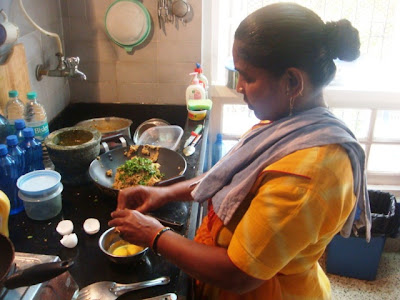 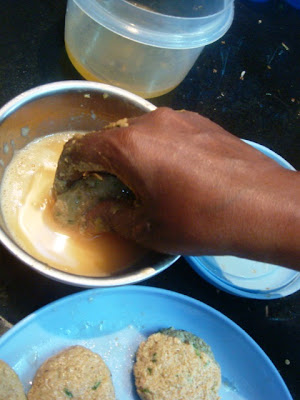 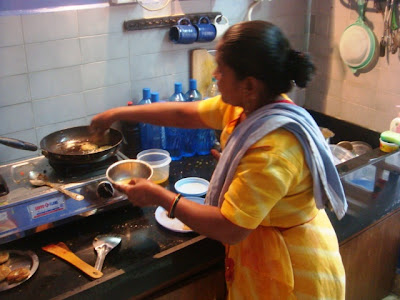 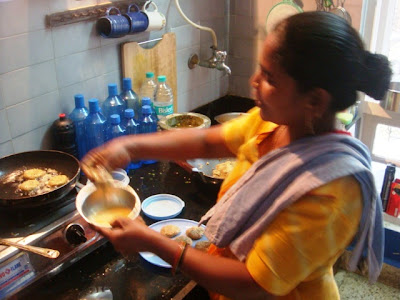 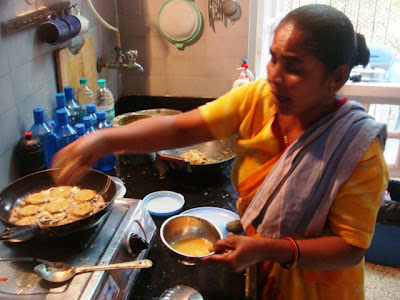 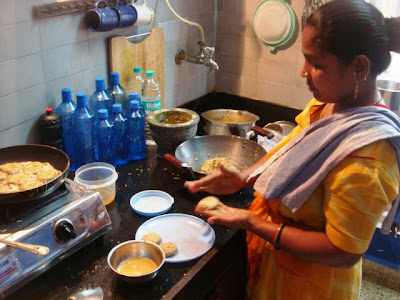 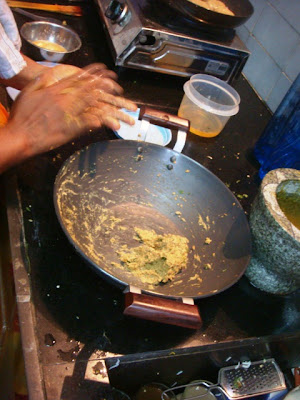 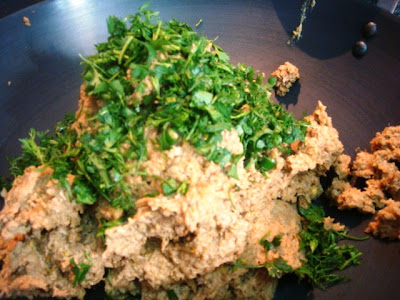 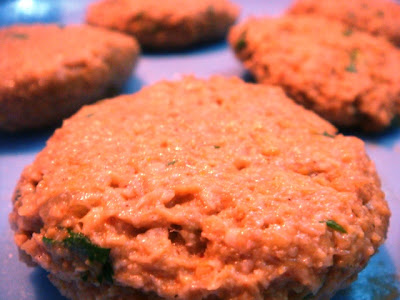 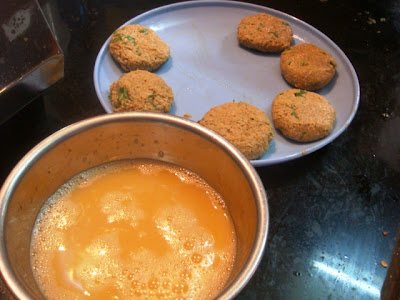 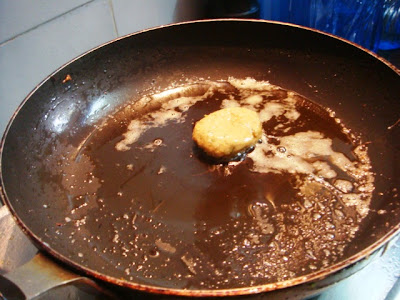 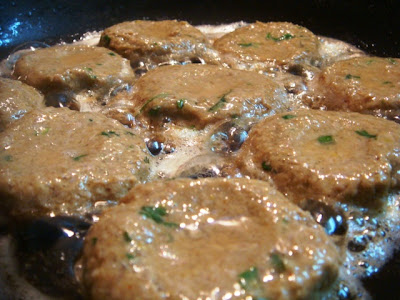 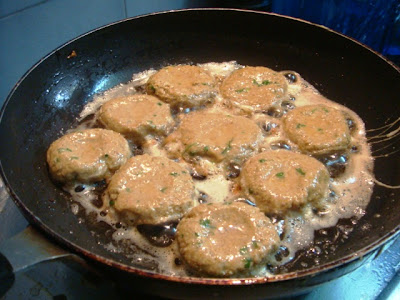 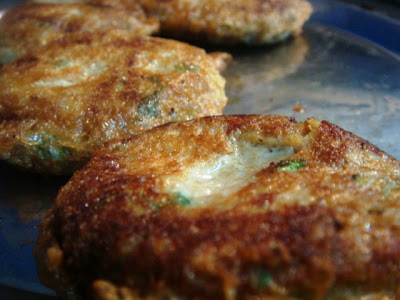 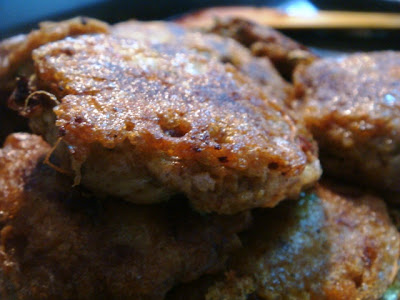 A great starter. Goes well with roti and green moong daal for dinner too. Tastes excellent even if you heat them in the micro a day later.

Most importantly, the only dish, I don’t need to give her instructions for. Now I hope and pray that banu doesn’t do her other thing this weekend. Bunking.

PS Banu told me that she went to a wedding to work yesterday. She learnt how to make new stuff like hara bhara kebab. I told her that she can keep the knowledge to herself as we will not eat veg food using loads of oil. She said that there is hardly any oil as you dip and take it out. She also said that they took many photos of her. btw she didn't bunk the whole weekend. A record

Unknown said…
i love this open kitchen concept a lot. Tell Banu she looks great in the photos. And tell her, the kababs were 'lazizz'.
19 February 2011 at 11:51

Sandeep said…
thnx for this, i am a hard-core carnivore who cant eat kababs in restaurants since I am severely allergic to channa dal. will try this at home though :)
19 February 2011 at 12:56

Pinku said…
hey thank u to both Banu and you for the recipe.

Am going to try these tomorrow itself...and thanks for the chicken mince idea.

Debopriyo said…
Thanks, Kalyan. Will try this one out definitely. Have some Argentinian beef mince in my fridge.

By the way, Banu seems to be dipping the kebab into a something before she fries them. Is she using an egg solution to coat the kebabs?
19 February 2011 at 22:26

Chetna said…
Those kebabs look FAB. But I have the same query as Debopriya..is that egg being used for dipping/coating before frying ? Can we omit the egg as Mohit is allergic to it ?
20 February 2011 at 02:09

Anonymous said…
what she dipping them in egg? u missed to add that in steps

Kalyan Karmakar said…
sorry for the omission... yes the kebabs are dipped in eggs first...masala is regular branded powdered garam masala
20 February 2011 at 17:04

whenharrymetcelery said…
This is such a nice story. Makes me smile :) I think Banu deserves kudos for turning into your sous chef!
10 March 2012 at 00:03

Sarita said…
Bunking Banu is fast becoming a blogosphere celeb!
Its heartening to see her portrayed as an individual with a distinct personality rather than a nameless, faceless aid to your culinary passion.
15 May 2012 at 15:06