We went to Sancho’s one evening. They didn’t take reservations. We didn’t get a table. A colleague and her husband went another night. They didn’t get a table too. In fact I didn’t know anyone who had gone to this new Mexican restaurant at Khar and eaten there. Yet, this was the restaurant everyone couldn’t stop talking about. For Mumbai barely has a Mexican restaurant. Very different from the late 90s when there was Taco Bell at Bandra’s Turner Road and a place called Sheriff at Linking Road, Bandra. Then the Mexican wave died. Till there was Sancho’s. But then again no one had actually eaten there. Was Sancho’s an Urban Legend? 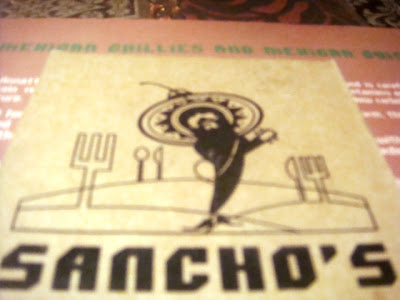 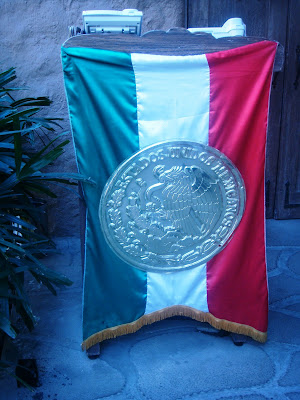 I was unimpressed by the Mexican food in Mumbai in the late 90s. A forgettable tradition carried on till today by the Cream Centres and Bombay Blues of the world. Sticky, creamy, red things called nachos, enchiladas and other Gujarati sweet nothings. Mexican food in Mumbai was soon defined as beans, ketchup and poor quality melted cheese over sticky crackers.
Then Anthony Bourdain came into my life. I saw the episode of No Reservations where he went to Mexico City with one of his sous chefs. Apparently most kitchen chefs and workers in NYC are Mexican. Just as waiters in Mumbai in the late 90s used to be Bengali. Bourdain’s Mexico was very different from the synthetic Mexican of Mumbai. A riot of reds, greens, purples. Rich meats. Menacing chillies. Guacamole. Stuffed capsicum. This was oceans apart from the red plastic “Mexican” of Mumbai’s Gujarati havens. Then I read Anthony Bourdain’s book, ‘A Cook’s Tour’. The chapter where he goes to the ranch of another Mexican sous chef. Of the cow that was slaughtered and slow cooked underground. And the hours of tequilas which gave it company. This was a different world. A world for real men. Men who love to eat. And are proud about it. I had to go there. I had to experience it. I had to follow in Bourdain’s footsteps as my rites of passage.  And till I made it to Mexico, Sancho’s seemed to be the answer. But how did one go there? It is so difficult to get a table in the evenings. Then I thought of going there for lunch on my birthday. What better day than one’s birthday to experience something new?
We got a table. The restaurant was fairly empty on a Monday afternoon. Barring a table of vegetarian ladies who kept comparing the food with rajma and roti that they could make at home. The first thing that struck me was the sense of space. Sancho’s was not as small as we thought it would be. In which case the sort of crowds it garnered night after night was creditable. There was a certain calm and serenity to the place which is just what one needed after a dinner at home which ended at 4 AM. 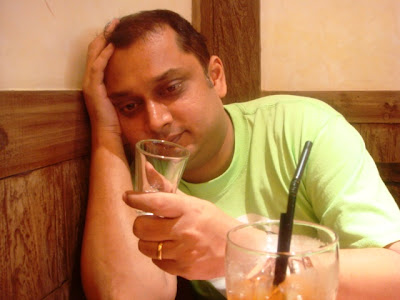 Our first waiter was a bit circumspect. That wouldn’t work for me at a pricey place with an unfamiliar cuisine. I asked for a change of waiter and the next gentleman was sure of his stuff. We skipped the Margheritas and Sangrias (off the menu) and went for ice teas and Diet Cokes. I started going  though the menu and was impressed by the fact that they had divided it into authentic Mexican and Tex Mex (which is the American Mexican equivalent of Indian Chinese in spirit). 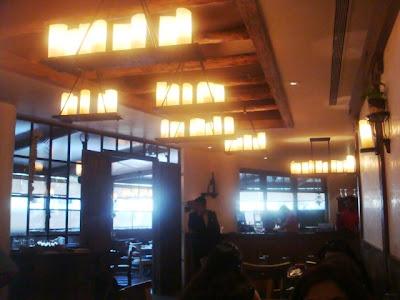 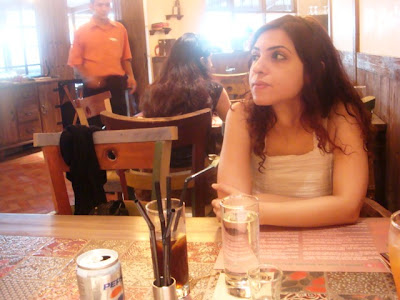 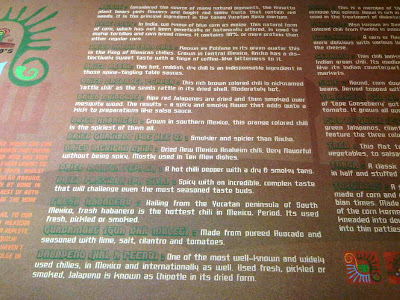 So the Mexican pork corn taco (RS 350ish, 7 USD), which we chose, was soft unlike Tex Mex which apparently was crisp. Our meat of choice was pork. ‘Belly’ as the waiter confirmed. K and I were both awed by the delicacy of the dish. It was a wrap stuffed with red meat, peppers, guacamole (thick like the way a girl I met recently said it should be). Yet seemed to float in our mouths. The taco extremely soft with a pleasant mouth feel. The pork as poetic as real meat can be. We chose Habanero Peppers, the hottest apparently in Mexico, to season our tacos. And boy, they seared even our Indian chili trained palates. 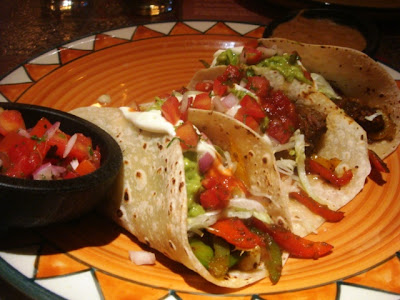 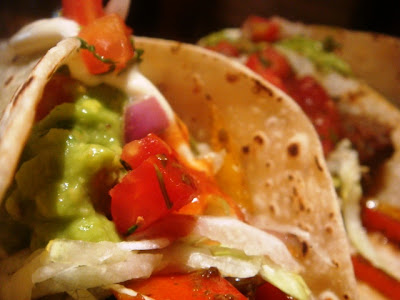 The tacos came with refried beans and K kept saying how she enjoyed her ‘rajma’ (Punjabi kidney beans) much to my discomfiture. I asked for an extra serving of guacamole which was a tad salty to eat by itself. 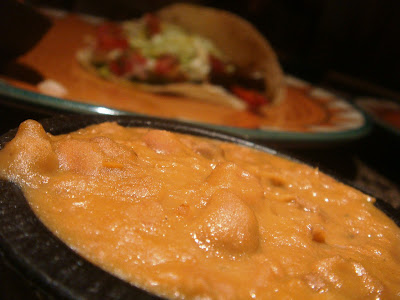 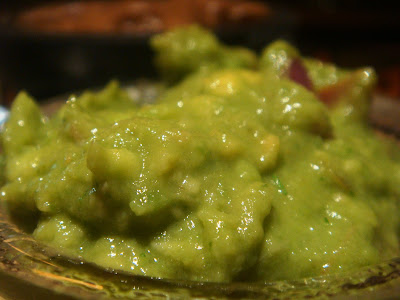 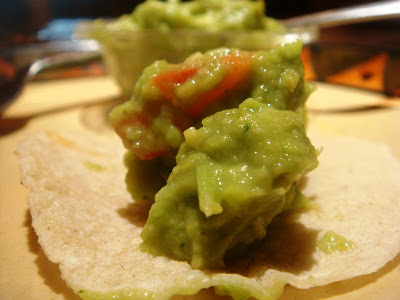 The other dish that I chose was a chicken chocolate mole. We had read about the use of chocolate in Mexican cooking in the book ‘Like Water Like Chocolate’. The chicken mole at Sancho’s was a more expensive dish (Rs 550 / 11 USD) than the taco. We got rice, beans, two thin strips of chicken with the chocolate sauce and a sprinkling of sesame seeds on its. The sauce wasn’t sweet and had a deep masculine taste to it with the understated heat of chilli. I guess that we haven’t taken to the taste of chocolate in food. Just as some don’t take to the taste of mustard in Bengali food. K said, “I don’t like anything coming between my chocolate and me”. I agreed. The tacos was a tough act to follow. The mole didn’t work for us. 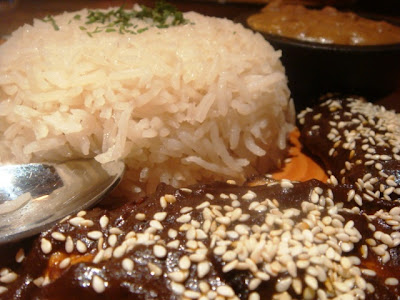 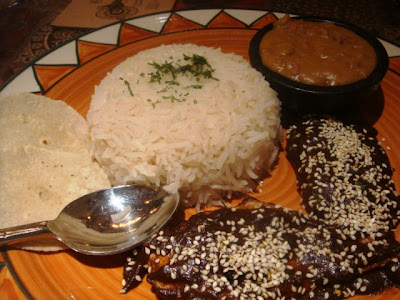 Still, I must say, that it was after a long time that I had gone to a newly opened restaurant and really liked it. No wonder Sancho’s is full all the time. I hope they find space for us if we want to go there again some evening. 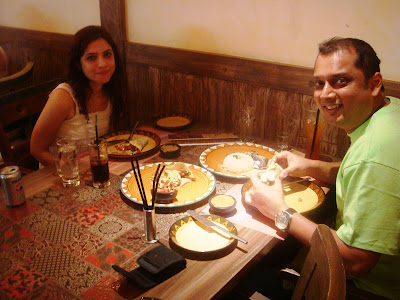 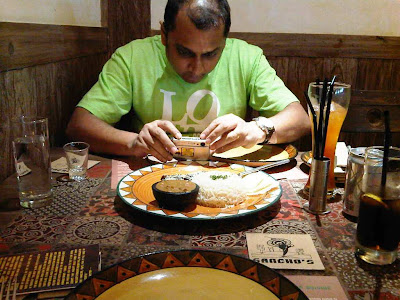 Scarlett said…
I luuuuuuurrrrve Mexican food! My favorite is chicken & cheese quesadillas (authentic Mexican ones) with a dollop of sour cream & guacamole on the side. I like tacos too but don't enjoy burritos as much. And of course, there's nachos :)
12 February 2011 at 09:49

Kalyan Karmakar said…
We must go to Sancho's when you come to Mumbai. You can tell me how authentic it is by American standards
13 February 2011 at 01:44

Sassy Fork said…
Th only Mexican dish I have liked so far has been Chicken Quesadilla from Chipotle,Los Angeles.
After your post,I am curious to try Sanchos but definitely no chocolate with chicken for me.
13 February 2011 at 10:47