on February 18, 2011
Finally went to the California Pizza Kitchen today. We were at Bandra Kurla during lunch time. I thought that we might as well try the CPK there out. All I had heard about it so far was that it was expensive. No one raved about the food.
We walked in to find the place quite crowded on a weekday afternoon. A mix of the white collar crowd and kids. Well BKC is a bit of a desert with fancy office buildings but hardly any eating places. There was some outdoor seating and the weather was pleasant enough for that. We sat inside though in the largish restaurant with a modern clean decor. 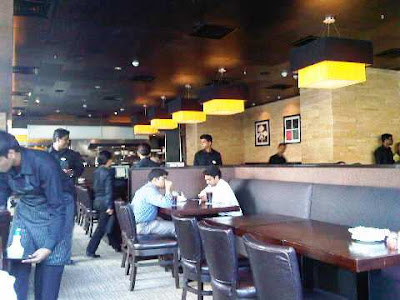 The service was friendly and prompt. There were quite a few smiling and attentive waiters around. And, yes, they did add a service charge for this.
I had a peach ice tea which had character and was not one of those sugar syrupy ones that they often serve at local restaurants. 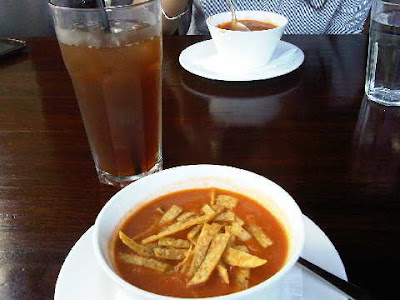 We followed this with tortilla soups which my lunch mate recommended from her last visit here. It was a thick tomato soup. The menu card described this as having ‘vine fresh tomatoes’ with green chillies. The chillies were not visible but made their presence felt through their heat. There were crisp tacos strips which melted into the thick soup and combined with soft, sweet corn to give an array of interesting textures. This was a good pick. 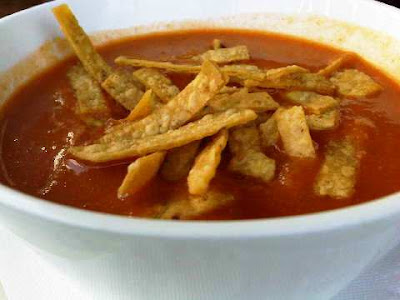 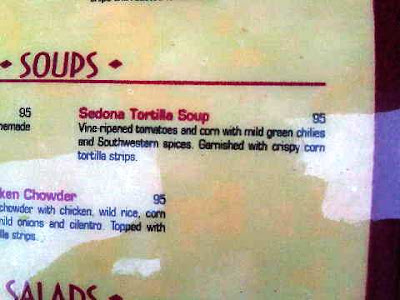 There were pastas and salads but I wanted to eat a pizza. It was the ‘pizza kitchen’ after all. They didn’t have small portions or slices. So I chose a vegetarian pizza. Now, don’t gasp. My lunch mate is vegetarian and she offered to eat soup and salads while I had a pizza. That didn’t seem fair to me and the pizza sizes seemed to large for one person. She even sportingly suggested adding non vegetarian toppings on half the pizza. There were some interesting vegetarian combinations which I thought were worth trying. Plus I didn't want to be seen as the boss who bullies his juniors.
I chose a pesto pizza for us. The result was a dish which had a lot of promise and yet disappointed. And that had nothing to do with the lack of meat. The thin crust was phenomenal. Very limber and fresh. Not over crisp at all. Very elegant with a stream of melted mozzarella discreetly flowing through the crust. This was sheer genius.
The pesto was very disappointing though. It didn’t have the zest and spunk of a good pesto. I like pesto because I find it to be raw and fresh and with loads of attitude. The mix of fresh basil, sharp garlic, pine nuts and Parmesan is meant to be a robust and manly combination. The pesto in the California Pizza Kitchen on the other hand was too sweet and dainty. More feminine than masculine. Could have passed of as the sweet version of the Gujarati dish, Undhiyu. The presence of meat wouldn’t have made a difference.
The sun dried tomato added to the saccharine motif. The only respite came from the odd piece of chopped red olive which gave an occasional much needed edge to the dish. So it wasn’t the lack of meat which failed the pizza. It was the very poor pesto which spoilt the effect of the fantastic crust.
The regular version of the pesto pizza came with cottage cheese or paneer which had too neutral a taste to make a difference. In retrospect goat cheese, which was there in other combinations, would have helped. The nomadic salty taste of goat cheese could have salvaged the gulab juman syruped pesto pizza. On asking a waiter I found out that I could have opted for this. Too late. 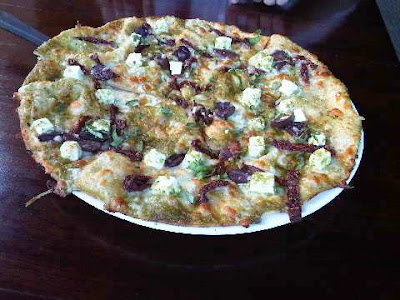 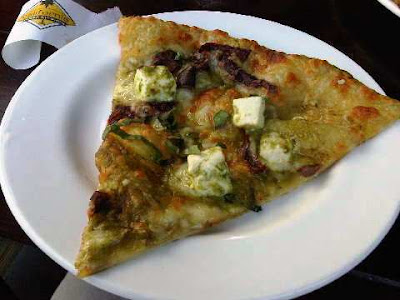 So should you go to CPK? Only if you are at BKC. Don’t mind spending Rs 700 – 1000 (18- 20 USD) for two. And are not a very demanding eater.
As for me, maybe I need to visit it again and find some meat.
Bandra Bites Blackberry Boys vegetarian stuff

Sassy Fork said…
Thai Crunch Salad from CPK is one of my favorites.Haven't been to CPK here though.Wonder if it has Gumbo and other dishes I tried in the US.Their Red Velvet Cake is also wellknown.
18 February 2011 at 06:30

Nidhi said…
hey! can i request u to tel me where to buy cheeses to take back home to delhi! Is sante the best place coz I hav seen u blog abt it the most
18 February 2011 at 08:43

NikhilS said…
I love your blog for its honesty and its celebration of excess, but it seems to me that you have inflexible notions about food—that something HAS to be prepared a certain way else it is not true/authentic (Re: the pesto). Seems a little anachronistic today when the mixing of cultures has influenced cuisines all around the world. Of course, I have no problems with you not liking the pesto (In this case, I wouldn't have either), but to imply that there is only one way of making it is a little naive.

Also, I am not sure lending gender to food does it any favours. Best not tarnish the sanctity of food by making socio-political implications.
18 February 2011 at 11:28

Kalyan Karmakar said…
@Harman, they had a barbecue chicken pizza listed. Not sure of Chicago. Will check next time

@Sassy, Thai crunch salad was there. Have you tried red velvet at Candies?

@Nidhi, Sante if you are at Bandra. Else Nature's Basket

Sassy Fork said…
@Nikhil: Kalyan is writing about what food does do him.If it doesn't appeal to him,he is frank enough to say so,as you agreed.He writes as a common man and that's what attracts so many people to his blog.
Pesto cannot be considered "fusion food"..Pesto has to be pesto.Some make it well and some don't,depending on the proportions of ingredients they have chosen.Here he is saying just that.
How he chooses to describe it should be considered his artistic license...else we'll just have many similar looking write ups!
18 February 2011 at 14:07

NikhilS said…
Hmmm... I never did mention fusion food. Although, yes my comment was a little bit ambiguous on that aspect. So apologies.

In any case, a simple Google search will tell you that in Italy pesto is made from a variety of herbs (even the origin of the basil is a deciding factor in many Italian towns), nuts (sometimes pistachios or walnuts are used instead of pine nuts) and ingredients. Some towns in Italy don't even add garlic. Almost the only thing that stays common through all the variations is the olive oil, which Italians from everywhere insist must be from Liguria. I only know this as I have worked as a researcher on a book on Italian cuisine. That is what I meant by hard-and-fast notions. When even the people who have been making pesto at home for centuries cannot agree on what goes into it, how can you or I say that only one method is true.

BTW, I love that I can debate about food here with people who don't ride in on their high horses. Kudos to Kalyan for that. A top blog.
18 February 2011 at 14:32

Saradhi Rajan said…
That pesto looks brown rather than green!Clearly an unhappy childhood.
18 February 2011 at 15:41

Sassy Fork said…
@NiKhil:I agree...it's great that people from different walks of life can meet on this platform and have discussions.
Finely Chopped always gets a whole lot of comments and that itself speaks volumes about the blog!
18 February 2011 at 15:51