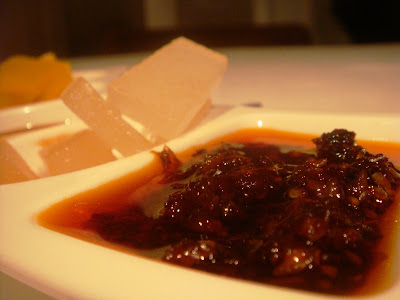 We were at a loss on where to close my birthday eating with. I was treating but K left the choice of place and cuisine to me. Sancho’s where we ate lunch had set a really high standard. Mexican cuisine was reasonably new to my palate. I wanted more. Let this birthday be a day of discoveries. There were a couple of French restaurants/ cafes which have opened in Mumbai recently. The feedback on them ranged from ambivalent to vitriolic after I asked around on twitter. Then K pointed me to my favourite cuisine. Chinese. She suggested the hallowed Golden Dragon of the Taj. Seemed like a good choice. Plus Ranjit, who had carefully hand picked a birthday gift hamper of the choicest condiments, said that Golden Dragon is good on Sichuan cuisine. While Mumbai is big on red coloured dishes called Schezwan, you can rarely get authentic Sichuan pepper based dishes outside of a five star here. We were on a relaxed budget that night.
We took a cab and went as we were told there was no valet parking. Unlike the ITC Grand Maratha or Thai Pavilion (Amba’s anniversary story), you don’t get a cake or free dessert at the Golden Dragon even if you suggestively say ‘birthday’ while booking. No free cabbage or khimchi either and we were a bit hungry.
The restaurant was brightly lit and the food blogger in me got excited. Good Photos. Most high end places at Mumbai are so dark. Almost as if they are embarrassed of the food they serve. No such problems here. The decor was reminiscent of a dining room of cruises in Agatha Christie murder movies. Grand, yet understated. Not too big. Sitting at a table across was a Parsi family who seemed quite at home here.
K chose a mocktail which was described as a ‘melted tiramisu’. She completely agreed with this. Made it a point to tell me that I should write that she disagreed with my description of ‘like cold coffee'. She knocked over a bit of her drink in her excitement. The folks at the Golden Dragon immediately replenished it. My Long Island Ice Tea was well made too. 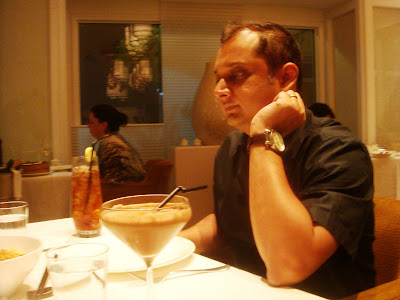 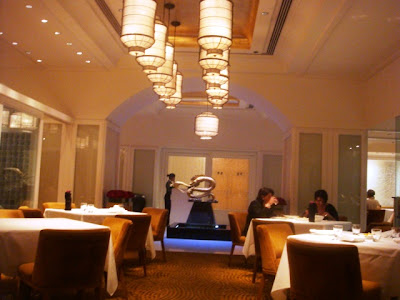 We had a fairly experienced gentleman named Elvis taking our order. He had a point of view on things. He rejected my order of ‘char siew’. Said it would be too sweet unless we wanted it that way. Thankfully approved of our next option. Sliced pork, bacon and string beans. This was a fantastic dish. The pork had a good lineage. The ham tender and yet salty like soft hearted sailor. The string beans extremely fresh and bouncy. We quite enjoyed the crunchy beans and didn’t fish it out as we normally do with vegetables that come with meat. An interesting balance of the innocence of greens and the sins of red meat. Almost like a Playboy Centrefold in a Nun’s habit. 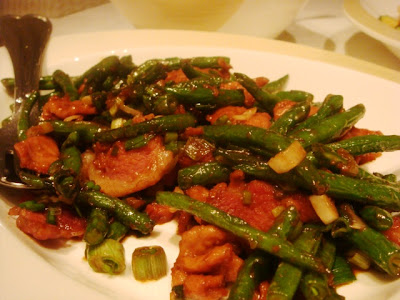 Our other order of lobsters in pickle with ginger was poetic to say the least. The lobsters were demure and tender and were married harmoniously to the sharp and passionate pickles and ginger. An amazing combination of very pleasant, succulent bites punctuated by the odd zest of pickles. Both dishes were stellar and rose to the occasion.
We had this with a Sichuan vegetable noodles that Elvis recommended. This was off the menu. He had a strong point of view on this. I had visions of ghastly red noodles in my mind but went ahead with his recommendation. My first reaction when the noodles came was “it looks like something I would have cooked”. And I mean this is as a compliment. There was a certain fluffy airiness about the noodles which made you fall in love with them.Then there were the bites of fresh fiery Sichuan peppers which made you realised that this cherubic dish had a few pranks up its sleeve. 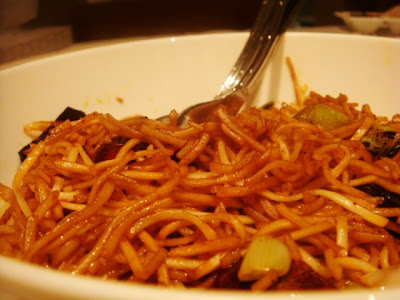 The food was really grand up to this point. My only grouse was that they got the dishes  immediately after the drinks which was a bit sad. What if we didn't want to run out in twenty minutes after paying a good part of a cost of a night's stay at the hotel? They should have at least asked if wanted the food along with the drinks instead of plonking it down all together.
The noodles wasn’t enough and I thought I’d go for a fried rice. They had burnt garlic rice and a rice with prawns, roast pork, chicken. After much silent callisthenics I managed to attract a waiter. Not Elvis though. This guy refused to give me a burnt garlic rice with roast pork. Apparently their chefs are too mechanised to be able to customise.  Which, for a very expensive place, was difficult to digest. Especially for someone who often thinks on his feet as he cooks. I went for an egg fried rice which was quite ordinary, not well flavoured and didn’t even seem very authentic to me. The rice was more Mr Chows than Taj IMHO.

Elvis later came and told us that we should have gone for the full blown pork, prawn ,chicken rice. Probably would have if he was taking our order and not the Storm Trooper. 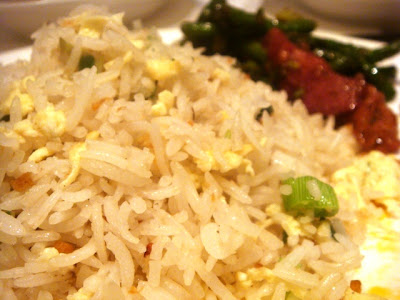 Still, I must say that we ate a really grand dinner. Left me a lot happier than our meals at San Qi at Four Seasons and the one at the China House, Chinese place at the Santa Cruz Hyatt, did. And I was glad that K, who is not too fond of Chinese, or Mexican, liked both the meals. I was treating after all.
The price? I won’t mention that here as that would surely lead to an income tax raid at my place. Let’s say that it cost me as much as two night’s stay at a four star at Penang cost me. Remember, we didn’t drink too much. No desserts. No starters. But then you can’t expect ‘cheap’ when you go to THE Taj.

So would I prefer the Golden Dragon to a couple of nights at Penang and its Cafe 78? You should know me well enough by now. 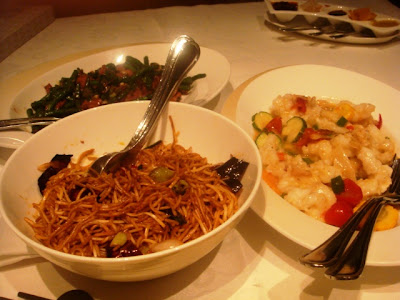 Unknown said…
we used to visit the golden dragon a lot when I was a kid. The maitre-de very kindly taught me how to use chop sticks. they had a dessert there deep fried ice cream dipped in honey. Hot crispy and sticky on the outside and cold creamy vanilla ice cream inside. It use to baffle me. then they stopped making that and many other favourites and so did we frequent it less. I believe their new revamped menu is pretty cool. Nice review. Should check it out again.
Also I love it when you say- its something like I would have cooked.
13 February 2011 at 15:56

Gaurav said…
i have sadly given up on the Taj all together.

their coffee shop could be a reason to frequent it but Shamiana is the weakest of em all.

also, the unpredictability of the parking situation makes it near impossible to pop in..

sad, coz i have some great memories.. good to see you guys enjoyed yourselves for the most part
13 February 2011 at 17:34

Gaurav said…
@ kk - The moment someone thinks they are above question is when they begin to slide downwards.

Shamiana has been the weakest of coffee shops for a very long time. Golden Dragon of course is above average and Wasabi is great and brings a lot of presitge to them.

Souk can be so much better that its sad they dont do more with the place.

The Oberoi for now is the sole force propelling the dining scene forward
15 February 2011 at 11:38

Kalyan Karmakar said…
That's assuming five stars are synonymous with the dining scene. I am more of a grunge eater after all.

I do agree that neither of the two Ts might suffer from Hubris. But people do tend to idolise them
15 February 2011 at 11:51

Ever since I started watching Masterchef, I've started appreciating dishes that have texture to them. The pork with string beans looks like one such dish.

On one of my recent trips to Delhi, I went to a Sichuan place in Gurgaon called Ho Shi Njan Njan. Really liked it. The appetizers weren't great but the noodles & Sichuan chicken we ordered were phenomenal. Of late I look for light sauce-based dishes at Chinese restaurants. Like a chicken teriyaki you'd get at a Japanese restaurant. Sadly, most Chinese restaurants in India dunk the meat in cornflour based starchy gravy! Ho Shi Njan Njan was really refreshing from that perspective.
3 March 2011 at 12:49