on February 04, 2011
You might have noticed that my daily lunch blog posts have disappeared after we shifted to Fort.
What do I write about? The toxic channa bhature that I ate at Bombay Blues on day one when we crossed over to the West to eat? Or the attempted walk  downstairs one day? When I discovered a vada pao stall. And three BMC garbage trucks beside that. The dust storm drove me in that afternoon. And we don’t have shower stalls at work. I never went down again. And then there was the day when I called for Chinese from a place called NH1. I know it was a silly idea but I had a bad throat and wanted something non spicy. Fried rice, lumpy soup and chicken pellets at Rs 330 made me feel like running back to Baba Ling’s arms. So it’s been Banu’s cooking from the previous day for lunch since then. Lunches from home. Except on a day like today when I forgot to tell her to keep lunch ready.
Sandeep, a North Indian vegetarian, with a strong point of view on good Punjabi food, told me about a dhaba at Andheri E. We drove down there today. The place was called Uttam da Dhaba at Marol, Andheri E. The drive from Andheri E station to Marol seemed like driving down to Ludhiana at Punjab itself. It was quite a long drive well past the cluster of five stars near the airport. Thankfully there was no traffic and we moved smoothly. Fortified by the Amul lassis that Sandeep carried.Take a look  at the pictures of the badlands of Marol E and you will know why I miss Fort like a lovelorn teen. 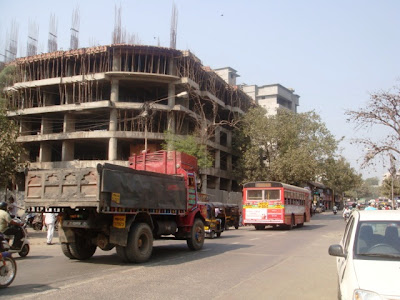 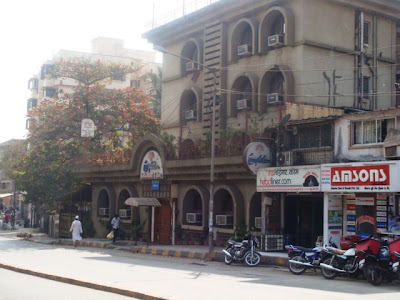 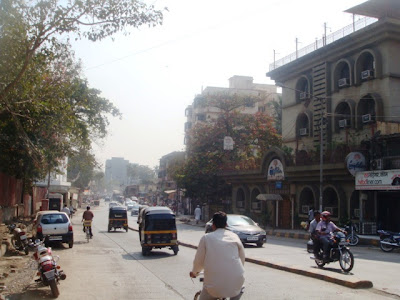 We reached Uttam Da Dhaba and walked past a couple of guys working the tandoor. There was a chubby Sikh gentleman at the counter with rosy cheeks. A sign that good food lay ahead.  We sat in the AC section.  The decor was simple and spacious. There was no attempt at false kitsch. Its simplicity conjured visions of dhabas (pit stops) in Rocky and Mayur’s show on NDTV, ‘Highway on My Plate’. There was also a section with charpoys or string beds to create a fake dhaba look which was good for a large group with time at hand. 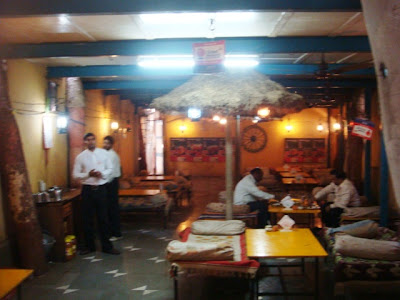 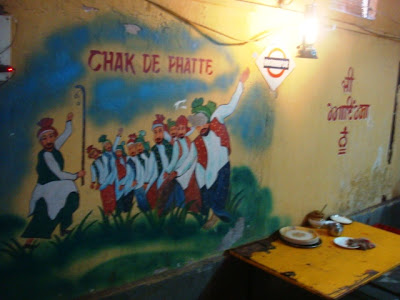 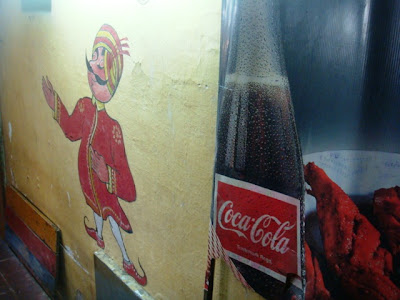 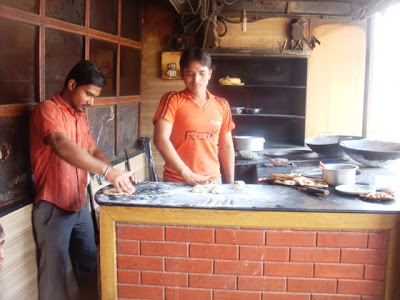 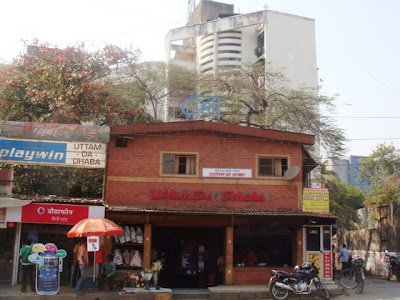 I started with a nice thick lassi. Chicken tangdi kebabs followed. Made in a tantalising tandoori masala...the right balance of colour and taste. The chicken drumsticks were fairly juicy till you came across a dead end. They were uncooked towards the centre. Left a raw taste in your mouth. Pun intended. In terms of grammage, you couldn’t eat your money’s worth. This was the only dark spot in an otherwise rosy afternoon.
The waiter had suggested butter chicken but I normally don't risk curries at such place. I sneaked a look at a butter chicken at the next table. It didn't inspire much confidence.
The sarson da saag, the Punjabi winter dish made with leaves of the mustard plant, was everything Sandeep promised. Sandeep told me that they made sarson da saagat at Uttam’s by pounding the leaves and cooking the dish from scratch. Most other restaurants at Mumbai used tinned sarson puree according to him. He was right, the sarson da saag here had a reassuring rustic, coarse texture to it. A far cry from the smooth tinned paste which he warned me against. Sandeep was also  right when he said that one dish would be enough for the two of us. In fact we couldn’t finish the entire serving.
We ate makki roti or rotis made with maize, the traditional accompaniment to sarson da saag. The rotis were covered with ghee and had a nice domesticated taste to it. As if lovingly made by someone’s mother. As was the kulcha that I ordered with my chicken. Another form of Punjabi roti. Piping hot, crisp and very maternal.

The food was fairly good, simple and uncomplicated. Leagues ahead of the bilge at Papa Poncho closer home.  Barring the chicken, the chubby cheeks of the owner, were a pretty good statement on the quality of the food. And at Rs 450 (9 YSD) for two, we were well fed and happy.

The ever smiling owner was a gentleman named Gursharan Singh. He used to run a  bar here earlier. Then rowdy customers and greedy policemen got to him. He gave up his liquor license and started the restaurant thirty odd years back.
And has hosted many a happy family since then.
From deep inside Andheri E Punjabi Punch

hamaarethoughts.com said…
Kudos for the post..lovely..mouth watering dishes..
I agree with you for the recipes and texture of the final product!
4 February 2011 at 03:35

Gastronomist said…
This brought back memories. We used to be regulars here in the mid 90's. Get comfortable on the khatiyaa and it was BYOB. Would love to go back after 15 plus years.
4 February 2011 at 09:37

Unknown said…
As a person who reads and enjoys your blog on and off I am disappointed with this piece,
especially the throwaway comment"but I normally don't risk curries at such place"

Would you then eat in any of the dhabas on the NH1,say, at Murthal or on the Karnal bypass? Or even Kesar ka dhaba in Amritsar?

Or, mea culpa, it would be interesting to know which highway dhaba in North India you've been to (not the one at Ballygunge Phari!), so that we can gauge the authority that you pronounce on how good or bad the makki (not makkai)or sarson is?

People do depend on your opinions,so perhaps a little more detail would perhaps make sense.

Kalyan Karmakar said…
@Harman, I had a good Punjabi guiding me so the credit on the texture comments go to him actually :)

@Anurag, I asked Mr Singh whether a BYOB concept existed. He said that it didn't any more as families come here and the police keep an eye too. This is the official stance and the best that I know as of now

@Suman, I avoid curries even in five stars because I don't like the taste. I wish I could have told you which dhaba I went to on the Ludhiana Delhi Road but most dhabas are nameless, we were high spirited and all I remeber is eating lemon chicken.

How did I know that the 'makki' rotis were good?

Thanks for just writing. These stories would remain untold. And they do matter. As usual, a wonderful post.

Suman - you are just being nasty unnecessarily – without making any point. Avoid it. PS - I have been to Kesar et al, and still would avoid curries at most dhabhas and like.

Kalyan Karmakar said…
Thanks Anchal, glad you liked it :)

Suman, changed the spelling of makkai. The menu card did spell it as 'makki' which i thought was a typo
4 February 2011 at 12:06

Penultimate said…
Nasty comments always come from bloggers that hide their identity.Makes me wonder as to whether they are from restaurants that havent received a good review from you...
6 February 2011 at 12:11

Pinku said…
I am always grinning when you write about North Indian/ Punjabi food...cause I feel a natural affinity to the stuff having grown up in and around Delhi.

Makki ki roti and sarson da saag alongwith some white butter and fresh gur is what makes the bitter winters in this part of the country worth it.

The medium raw tandoori was a dampner though...i always feel very cheated when this happens but the worse are the pre-boiled tandooris that some places make.

btw try some rajma, kadhi pakora, ma ki dal, paneer dishes and baigan bharta too if you ever go to this place again - these if made well are the true test of a good punjabi dhaba.

Note to Suman: those of us who live in North India also at times avoid non veg curries at unknown places sticking to a simple dal and tandoori chicken or tikkas as a safer more reliable option - I couldnt understand your ire. and as far as i know Knife just gives his take on what he likes or dislikes, he doesnt act the Mr. know all.
8 February 2011 at 13:47

Rajiv Jain said…
The Gravy, naan, lassi looking so lip smacking. I cannot sop myself eating that.
1 January 2015 at 16:45