Cooking up for a 'Curry Queen'. Lunch with Maunika Gowardhan

on March 15, 2011
Not that you needed  a reason but when a culinary achiever, and a very pretty lady to boot, looks at you intensely and says ‘you are the world’s best cook’, then you ignore the hyperbole, the generousness and the politeness for a while, and feel that it was all worth it.
Maunika Gowardhan who tweets as @cookinacurry and I finally met up when she dropped by at our place last Sunday. A trip which followed a promise to treat her to Bengali food cooked by me the next time she was at India. Well the trip to India did happen and the plans to meet were refreshed.  A glitch in between in the form of a bad back and I activated Plan B by trying  to ‘outsource’ lunch.

But it didn’t feel right. Especially after Maunika and I spoke for the first time and she said that she was really looking forward to eat my cooking. I cancelled the order I placed. The caterer, luckily a friend and a good egg, was most sporting about it. I roped in Bunkin Banu, my sous chef. Got her to cancel her plans to bunk on Sunday. Told her how M was asking about her. Which was true. Ordered the mutton the previous day. Marinated it. Booked a hilsa with Poonam on phone, for me to go and pick up the next day. Called a couple of friends over, @qtfan and @sassyfork , and it sounded like we had  a plan.
Poonam called me next morning and woke me up to tell me that the fish had arrived. I went to pick it up. Waiting impatiently for the Bong uncle with huge man boobs to stop haggling with Poonam. I was on a clock. But the truth is we Bengali men need our time in the fish market to unwind. I understood where this gentleman was coming from but I needed to scoot. Banu, bless her soul, did turn up as promised. Chopped and cleaned while I shopped.
I got back hit the pots and pans, instructed Banu on the prep work. Tweeted as I cooked. Clicked photos. On the camera. On the Blackberry for twitter. Trimmed the flowers that I bought for the vases. Answered Banu’s questions on what sheets to put out. Four dishes to cook between us. Rice and parathas too. One and a half hours to do it all. Thankfully @sassyfork and @qtfan arrived just as I finished cooking. Blogger and twitter friends who are like family now. I put the house in their hands as I shaved, showered and transformed into a Bengali bhadrolok (gentleman) for the parar rockbaaj (local ruffian) that I looked like earlier in the morning.

Maunika arrived and in a way the earlier chaos was something that she would empathise with. For Maunika Gawardhan, referred to as Curry Queen in this blog post that Sassy googled, is a private Chef based at the UK where she has lived for 14 years now after she left India to do her MBA. Spurred by a desire to show England that there is more to ‘Indian’ that chicken teeeeka masala, this self taught cook, gave up her corporate job to start a catering business. She sold her company a couple of years back and now does private orders. Trying to introduce the UK to the cuisines of Maharashtra, Bengal, Goa, the South of India and Punjab of course. Finger foods such as mini bata vadas, Malvani fish curries, mishti doi with fruit compote... this enterprising lady with a very busy diary cooks up her wonders for her clients. And between all of this she looks after her two year old son, writes her blog, Cook In a Curry, hosts radio shows, cookery classes, works on cook book ideas. A lady who has followed her dream and is supported by a very proud husband.
K joined us  and the five of us chatted away through that Sunday afternoon.
For lunch I made kosha mangsho. The special occasion Bengali mutton dish at whose heart lies slow cooked caramelised onions. The theme of my initial dinners when I used to call folks over. It is meant to be a slow cooked dish but I use the pressure cooker. Something Maunika approved off.

I wanted to make my doi posto ilish (Hilsa in yogurt and poppy mix) which I am rather proud of. Poonam didn’t let me down. The fish was of excellent quality. I had told her I had a guest from England. Interestingly everyone praised the ‘mustard’ fish while in my head it was a posto (poppy seed) fish. The measure that I used was 4:1. Goes to show what a powerful personality that mustard has. 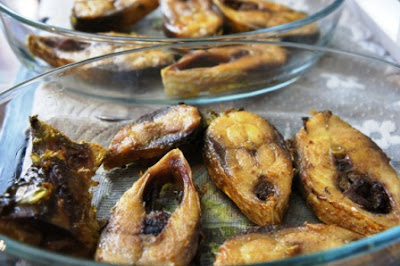 I picked up goat’s brains from Khar Market to make my version of bheja masala (brain masala). A Mumbai icon and far removed from the world of Bengali cooking. And as Bourdain said, the Muslim cooking of Mumbai did far better justice to offal than that of France does. Maunika had said that her grandmom used to make bheja masala for her. I stepped in yesterday. 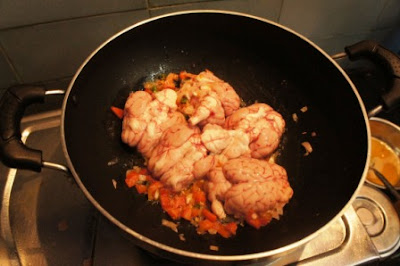 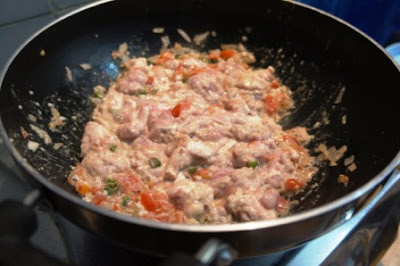 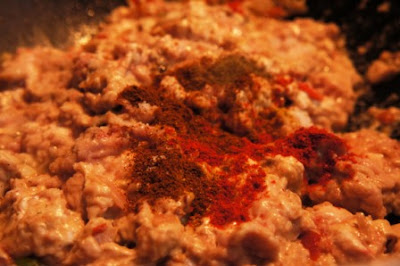 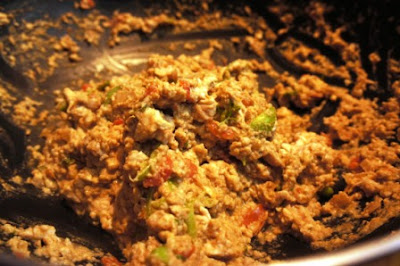 No invite at our place is complete without Banu’s shammi kebabs. And today the her fans from the world of twitter came in and met her and praised her as she giggled bashfully. I don’t do desserts so they desserts were out sourced. Sassy got khir kodom from Sweet Bengal. And I ordered parsi laganu custard from my friend Kurush of Dalal Enterprises. 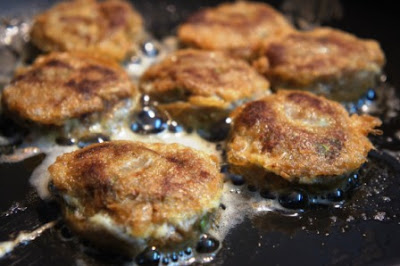 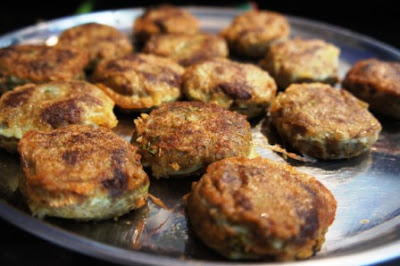 The afternoon eventually had to end as do all good things in life. With some very kind words as dessert for me. 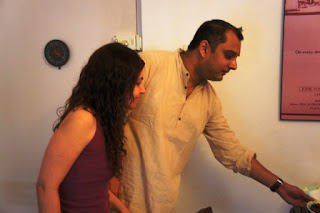 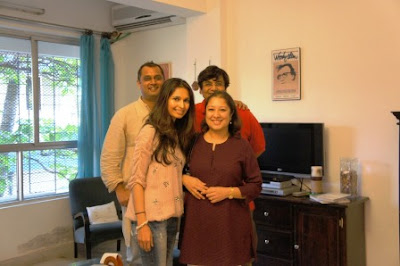 Sassy Fork said…
The compliments were very well deserved Kalyan!
It's wonderful that you are meeting people who have changed paths and followed their own hearts!
What's amazing about Maunika is that she is keeping the Indian traditions alive in a country far away that used to rule us!
Do hope she gets a TV show of her own cos she'll be very good on it.She's glamorous and gorgeous!
15 March 2011 at 06:44

Lorraine @ Not Quite Nigella said…
What a wonderful gathering Kalyan! Food and friends are such a nice match :)
15 March 2011 at 09:45