on March 21, 2011
It's a pattern. It always happens. I land at a new place with lots of expectations, planning to see, eat and then write. And then feel deflated after the flight, the ride down the faceless highway from the airport,  the hotel which typically seems to be in a barren land. I begin to regret my decision to come. I sleep. I wake up. A eureka moment happens. And I am back on my feet.

It happened at Penang till Hanif took over and the Eureka moment happened. At Chiang Mai till I had the pork noodle soup Nam Yo at the cart outside Warawat market.

After the looong flight, the Singapore like faceless drive from the airport and view from the hotel room I had given up on Melbourne too and wanted to go home. Of course I was here on work for a conference. The last mail I got on my phone before I lost the net was from a reader, Kunal, saying that he was here and that he would love to meet. The Eureka moment would have happened had I not fallen asleep.

Through the swirls of sleep and unconsciousness I kept remembering that I was supposed to call Neha, Rushina, of a A Perfect Bite's sister. I was supposed to meet Neha and her husband Mohit, for lunch. But I would dive deeper into the pillow every time that I would look at the phone till I finally made the call

The three of us met and the Eureka moment of the trip happened. This lovely, warm and effusive couple, food lovers themselves, took me to Oriental Spoon. Their favourite Korean restaurant which they had seen grow in size since they had moved into Melbourne. This met my plan as I my aim at Melbourne was to discover new cuisines which we don't get back home.

So I realised that khimchi is not, as Neha pointed out, the tomato sauce flavoured thing that they serve at China Garden. I realised why the Korean girls whom I met during a project at Delhi would keep saying that Indian food wasn't spicy. Mohit, a man who knows his food, took charge of the ordering. Cheese Bul Dak followed. It looked like the sweet Kung pao chicken of Mumbai till you took a bite. A surge of fire galloped through your body, and this was the medium spicy one. This was pure, raw heat, with no complications. The sort which tore through your stomach and then had you asking for more in sheer masochistic pleasure. There was a layer of Mozarella cheese on top which, as the waiter said, was not traditional but was now being picked up by those in Korea.


The Korean beer that Mohit ordered wasn't enough to douse the fire and it was only the sweetish sea wood salad which manage to calm down one's palate. Till you went for your next bite. of the bul dak

I was naturally wary of the pork bulgogi that follwoed. This, like the chicken, was an excellent cut of meat but was a lot sweeter. Or perhaps it wasn't so but seemed so after the tempestuous jet lag busting cheese bul dak.

And guess what I kept going for more of the Bul Dak. Masochistic as it sounds.

Thanks to Rushina, the kids were trained to  wait while us grown ups photographed the food. 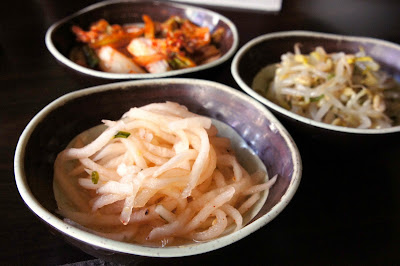 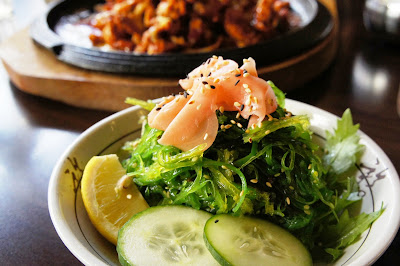 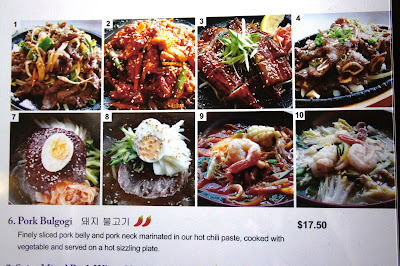 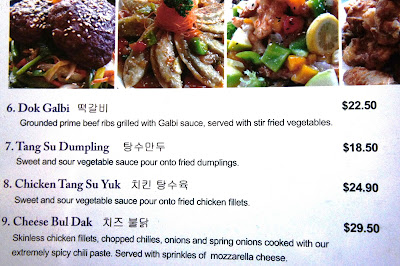 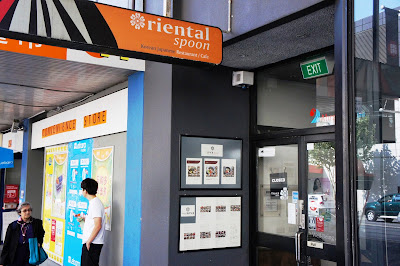 Cappuccino and Citrus cake followed by the rather arty cafe, Mr Tulk, outside the city library. Neha, a trained Barista, told me that they like to have their coffee heated at 68 deg c here. The coffee was full bodied but the sort that K would send back. The cake very elegant and yet sharp. A regular Scarlett O'Hara. 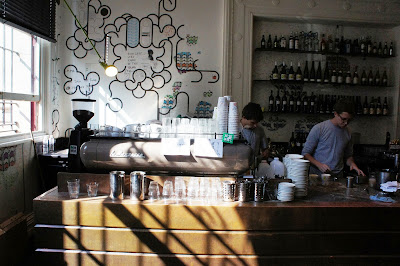 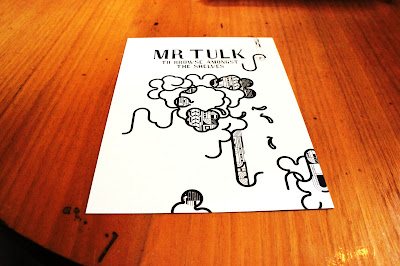 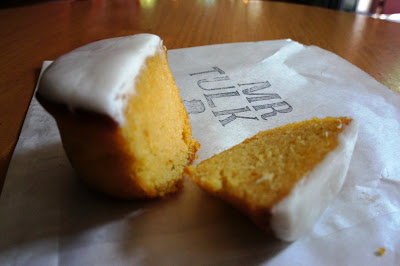 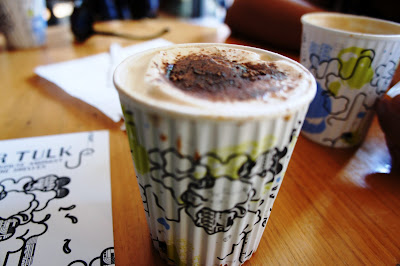 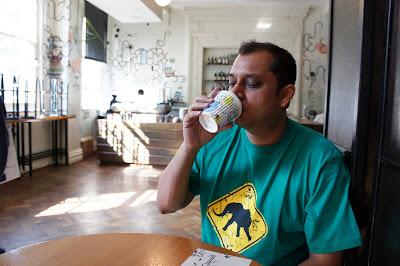 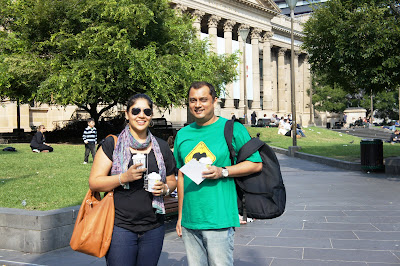 I bid the sweet couple goodbye and walked back to the hotel. It was a long walk and went in through shopping alleys and then over the Yarra River. Marvelling at the peaceful coexistence of the Singapore-like monotonous grass and greens and phallice buildings and grand Victorian Gothic buildings and art deco buildings peeping in between in the CBD.

But that's what seems to define Melbourne. A city with place for all. 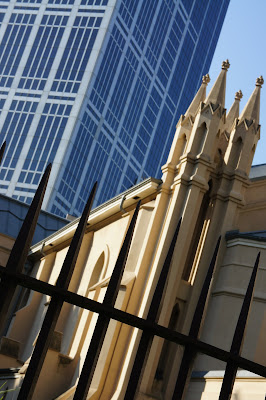 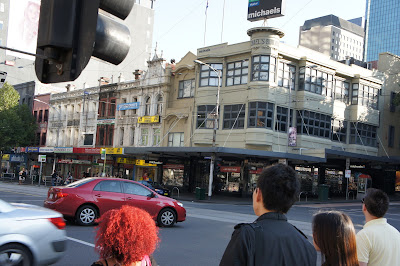 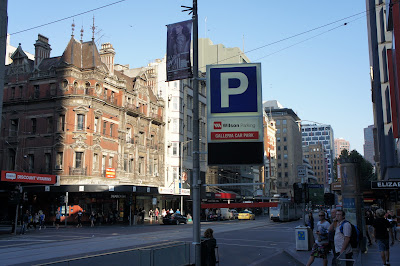 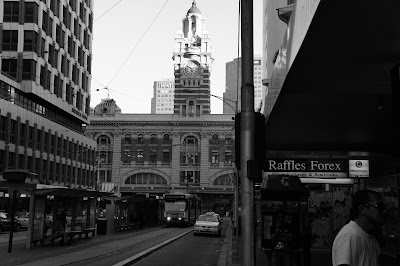 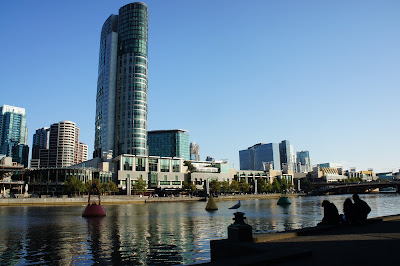 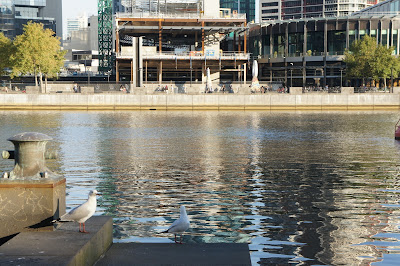 Unknown said…
Korean Food. Period. Prolly my fav cuisine as well. I will take Korean over anything. Love your australia writing. :)
22 March 2011 at 09:57

Scarlett said…
Thanks for the pictures Kalyan, for giving me a peek into Oz ;)

Wait till you get to Sydney. I've heard it's a totally different ball game compared to Melbourne...much more vibrant. Can't wait for your Sydney posts!!
22 March 2011 at 10:56

Srishti said…
Have you been to clarke quay or holland village in singapore? they're pretty great, not faceless at all!
23 March 2011 at 05:22

Kalyan Karmakar said…
been to both clark quay and boat quay in singapore
17 January 2013 at 22:36